Just because it is not going to help the New S0uth Wales Labor Party on this occasion does not mean that the underdog effect should no longer be an important part of election campaigning. It is alive and well and the NSW state Greens have made a mistake by forgetting it.

Bob makes a rare tactical mistake. Just because it is not going to help the New South Wales Labor Party on this occasion does not mean that the underdog effect should no longer be an important part of election campaigning. It is alive and well and the NSW state Greens have made a mistake by forgetting it. They acted at their weekend policy launch as if they are going to be winners in two seats — Balmain and Marrickville.

Instead of speaking in gloating tones about the prospect of success, Federal Leader Senator Bob Brown should have been reminding the faithful of what happened at the Victorian state election where similar optimism proved unfounded.

Odds about a no-fly zone. The chances of a no-fly zone are declining. According to prices at the Intrade prediction market, there is now only a 25% chance of the policy being implemented. 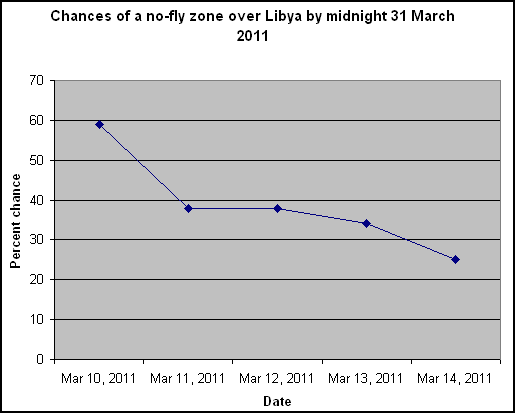 The market players are also now much less confident that Colonel Gaddafi will be gone by the end of the year. At the beginning of the month his departure by 31 December was rated as an 84% chance. This morning it is put at 55%

Thumbs down to fish torturers. It’s a long weekend for many so the fishermen are no doubt out aplenty putting hooks into mouths without the slightest concern for the pain they might be causing the fish. The common belief of those who throw out a line is that fish are inferior beings incapable of the feelings of higher life forms. Hence no worries about what that flathead is feeling as you pull it aboard.

I’m very much in that complacent category myself so I’m feeling a little uncomfortable having just read a lengthy report on the latest scientific evidence on the feelings of fish. Those spoilsports at Germany’s Der Spiegel have compiled what they headline “The hook that hurts –  Scientists tip the scales against anglers“.

“Fish might be much more than the mere reflex machines previously thought. New research shows that they are apparently conscious of and can suffer from pain, and scientists are calling for them to be treated the same as mammals and birds.” 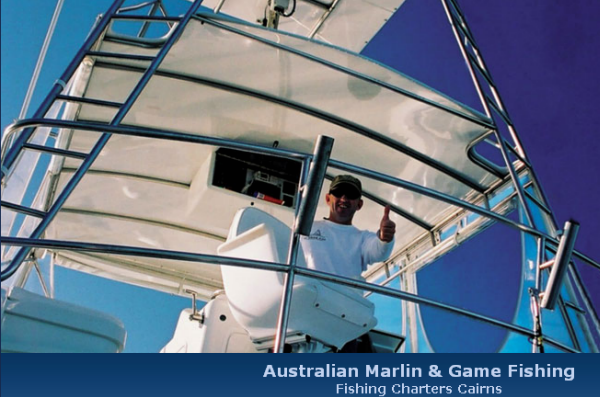 The thumbs down has already been given by the Germans to the kind of big game fishing for marlin that is an important part of the tourist industry in Cairns. Der Spiegel explains that current legislation in Germany already stipulates that anglers can only head out with a rod and reel if they are fishing for food or culling stocks to maintain healthy fish populations. Tournaments where the catch is thrown back in the water after it is weighed have been banned — along with the use of minnows as live bait.

Cows with guns. That fascinating series by my Crikey colleague Paul Barry on the relationship between sport and fast food with its mentions of McDonald’s brought the memory back to mind and that fish related story on animal welfare probably makes this little song even more appropriate. 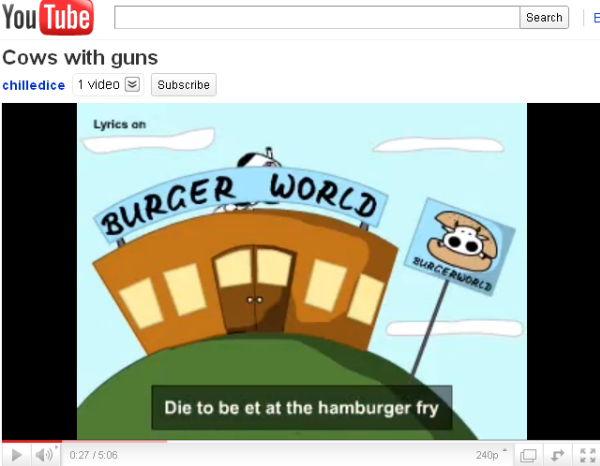 Love the Cows with Guns song, but cows with udders aren’t “he’s”.

Cows with guns was a true classic from it’s first appearance.
But after today’s column, it seems we need a new tune from Dana Lyons.
Fish with hooks? 😀