NSW political spy Boilermaker Bill reports: Laughter within the NSW Labor ministry about the Wednesday morning exchange between Premier Kristina Keneally and ABC News 24 host Virginia Trioli where the premier labelled NSW General Secretary Sam Dastyari a fool could be heard across Macquarie Street. Keneally identified the long-held view within Labor’s parliamentary wing and the ministerial ranks that Dastyari is out of his depth.  He’s seen as a stop gap until a more senior person within the labour movement can be found to replace him. He was rushed into the position after the departure of even sillier Matt Thistlewaite.

Even her harshest critics, including previous premier Nathan Rees, are unable to fault Keneally’s flawless campaign — in other circumstances she’d be leading Labor to a crashing win with her campaigning. Senior Left party officials are lamenting Dastyari’s cavalier attitude with more experienced officials desperately trying to protect electorates like Marrickville and Balmain while Dastyari is hitting the late night drinks and partying.

No one believes that Keneally’s comments were a mistake. They were a calculated act of revenge and were in response to his interview in The Sunday Telegraph in which he said the election was unwinnable. Sydney media are too frightened to write about Dastyari for fear of losing him as a contact. They are his lapdogs. Dastyari is on the phone to press gallery hacks more than ministerial press secretaries, dropping stories and attacking ministers. Senior party figures are ready to pounce.

Dear [insert name], from Nathan Rees. Thought you may find amusing the following pro forma from Nathan Rees’ campaign office I received as a Facebook message from a friend who’s also an ALP member. I’m not sure if the blank mail merge fields are supposed to be some kind of ironic twist — I just reckon it’s poor form…

XXXX sent you a message.

Subject:  A personal message to you <insert name here>

I’ve been volunteering for Nathan Rees in Toongabbie. He’s a great pollie to volunteer for, he’s done so much on <issue1> and <issue2>. He’s also been a very strong supporter of the <ethnicity> community.

It’s tough though, lots of people are busy on other campaigns and Toongabbie is a long way from where you live in <suburb>.

I’m hoping you might be able to spend just one extra day on the campaign.

We’ll be doing all kinds of campaigning so there will be something for everyone, from doorknocking to making sandwiches.

There are only two Sundays to go before the election, so this is really your last chance <insert name>.

We’ve been friends since <year>. I really need your help now <name>.

We’ll be going from 8am til 8pm, all you need to do is come down to the campaign office. It’s at Shop 5, 13-15 Portico Parade, Toongabbie. It’s opposite Toongabbie Station.

Bad taste, Queensland Lib-Nats? The bad taste award must go to the LNP for this billboard positioned opposite Fernvale Primary School in full view of students, many of whom have just been through the flood trauma in a local community, with lives being lost in the surrounding areas. 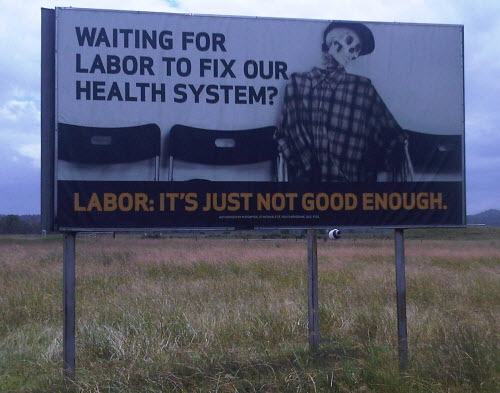 The leaking dam in NSW. What is happening at Woronora Dam between Sydney and Wollongong? The water level is lower than other dams in the Sydney catchment area. Is water being pumped out to other dams, or has the bed of a stream been cracked by mining in the Illawarra…?

Footy fixture, with discount fried chook. In light of Crikey‘s recent investigations into sports marketing I thought you may be interested to know we received a KFC Official 2011 Toyota AFL Premiership Fixture complete with 18 KFC discount vouchers in today’s junk mail pile.