"Lukashenko: the dictator in the dock", the Independent splashed this Wednesday, a front page on the regime of Alexander Lukashenko in Belarus. Is new Indy owner, former KGB agent Alexander Lebedev, settling a few scores, or pursuing a private agenda? Plus other media news of the day.

Settling scores via newspapers, Belarus style. “Lukashenko: the dictator in the dock”, the Independent splashed this Wednesday, a front page on the regime of Alexander Lukashenko in Belarus. 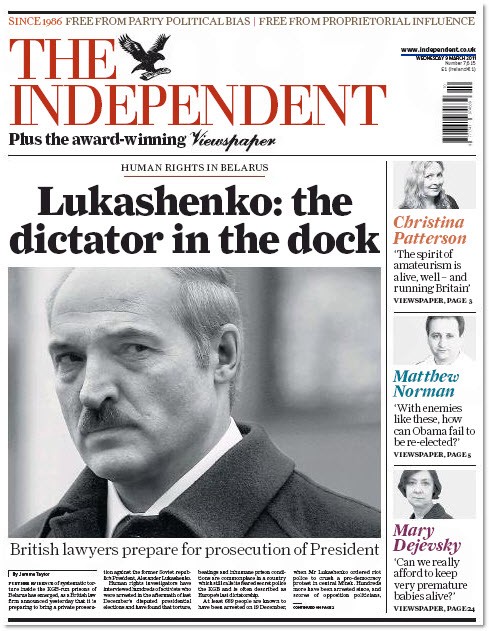 Lukashenko’s former Soviet republic between Poland and Russia, is more like a rigged parliamentary regime, on a par with Italy — though with a muzzled press, and a vicious secret police. And the old bruiser remains popular because he ensured that basic services remained running, while millions froze and starved to death in Yeltsin’s post-Soviet gangster-neoliberal 90s Russia.

The spotlight is a welcome help to the Belarus opposition, but there’s no news hook to warrant what has become a week-long series. A determination to root out brutality everywhere? Or new Indy owner, former KGB agent Alexander Lebedev, settling a few scores, or pursuing a private agenda?

Whatever the case, it is a, erm, brave choice for a paper whose non-giveaway circulation is probably heading south to 100,000 copies a day. — Guy Rundle

Dale a voice of the people. Dale Troy is running for NSW parliament as an independent. On the basis of this stirring YouTube ad, we’d vote for him… 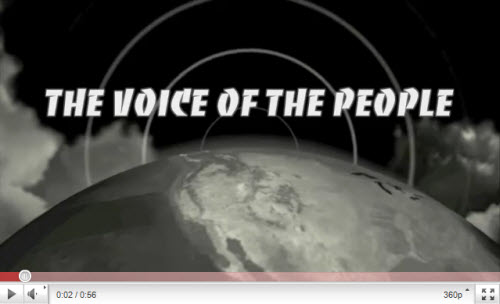 “Cancer-stricken radio broadcaster Derryn Hinch could spend his final months behind bars after the full bench of the High Court yesterday rejected his attempt to have contempt-of-court charges against him ruled unconstitutional. The man known as the ‘Human Headline’ is facing five charges of contempt of court for revealing the names of two sex offenders to a ‘name them and shame them’ protest rally on the steps of Victoria’s parliament on 2008, and subsequently publishing the names on his website.” — The Australian

Crikey CEO on The Mumbo Report.

“In this episode of The Mumbo Report, Amanda Gome, CEO of Crikey publisher Private Media visits Mumbrella House and discusses: What would happen to Crikey if it was bought out; The future growth of online publications; Different business models for different products; Making the transition from journalist to entrepreneur and beyond.” — Mumbrella

“Three BBC employees were subjected to 21 hours of physical and psychological abuse in Libya this week, after being captured and detained by security personnel loyal to the country’s dictator Muammar Gaddafi. The BBC Arabic team — comprising two journalists and a security consultant — was stopped on Monday while attempting to reach Zawiya, the city west of Tripoli where Gaddafi’s forces have launched a major offensive against rebels.” — The Spy Report

“YouTube today launched versions of its site for seven countries in the Middle East, a step that could add to the site’s local importance during the region’s ongoing turbulent political times by better surfacing timely citizen videos. The new local versions are for Algeria, Egypt, Jordan, Morocco, Saudi Arabia, Tunisia and Yemen. There isn’t one for Libya, where YouTube has been blocked since January.” — All Things Digital

Amanda Gome as CEO of Crikey. Must admit a perverse fascination to see what this former romance novel writer will do to an erstwhile serious media outlet such as Crikey. A friend at BRW reckons Smartcompany editor thought it such a joke he got a sample Mills & Boon novel off eBay. Wrote under name Amanda Carpenter. Real serious credentials to bring to Crikey! I don’t think…… Quite a joke, given these romance titles as “credentials”: A Deeper Dimension, 1983; Flashback, 1983; The Great Escape, ‘84; The Wall, ‘84; Rage, ‘84; A Damaged Trust, ‘84; Waking Up, ‘86; Reckless, ‘86; Caprice, ‘86; The Gift of Happiness, ‘86; Rose-Coloured Love, ‘86; Passage of the Night, ‘90; Cry Wolf, ‘92; A Solitary Heart, ‘93; The Winter King, ‘94; Perfect Chance, ‘96.