One of Australia's biggest commercial law firms has been dragged into a bitter boardroom spat between the family of Victorian Premier Ted Baillieu and fast-growing software firm Aconex.

One of Australia’s biggest commercial law firms has been dragged into a long-running bitter boardroom spat between the family of Victorian Premier Ted Baillieu and fast growing construction software company Aconex.

Big six firm Allens Arthur Robinson have been the subject of a conflict of interest allegation against former co-chairman and current consultant Michael Robinson over his dealings as a director of Aconex.

Last month, the Aconex board held an EGM after shareholders Ian Baillieu (brother of Ted) and Baillieu-controlled investment company Hawthorn Glen filed a notice to remove chairman Martin Hosking. Aconex and the Baillieus have been involved in a long-running battle after a share deal went under in 2007. While Ian Baillieu’s attempt to roll Hosking was soundly defeated, the family has continued to push for Robinson’s role at the company to be investigated.

The allegation, which Aconex say comes from a “former employee who is closely associated with a shareholder that has a history of litigation against the company”, centres around Robinson’s use of Allens Melbourne offices and listing an Allens email address in notices sent to Aconex shareholders. Aconex is a client of Allens Arthur Robinson.

Industry site Firm Spy claim a complaint has been registered with ASIC’s Misconduct & Breach Reporting department regarding an alleged conflict between Robinson’s work for Allens and his directorship at Aconex, however the regulatory body would not confirm or deny this when contacted by Crikey.

Frank Carroll, Aconex VP Marketing, says the conflict of interest allegation had been “independently reviewed” earlier this year and the conclusion was that it was unfounded.

“Michael Robinson acts with the utmost integrity and, through his directorship, has made and continues to make a substantial contribution to the success of Aconex,” he said.

The latest salvo comes after Aconex chairman Martin Hosking was the subject of an attempted ousting by shareholders at an EGM in January. According to UK-based industry blog Extranet Evolution, which comments regularly on issues at Aconex, the EGM was called by the board after they received a notice from Ian Baillieu and Hawthorn Glen for the immediate removal of Hosking. Ian Baillieu and Hawthorn Glen together hold approximately 5.6% of issued shares in Aconex.

According to Extranet Evolution, the move sunk without a trace after the board recommended shareholders vote against it. At the same EGM, disgruntled shareholders put a number of questions on notice (posted on Firm Spy) to Allens and Aconex, including not only the specifics of Robinson’s duties and whether this conflicted with decisions made by Aconex, but also his role in the long-running battle between Aconex and Hawthorn Glen.

In 2007 and 2008, Hawthorn Glen was involved in a bitter courtroom stoush with Aconex over a share deal that went bad. Aconex was represented in that case, which was settled out of court, by Allens Arthur Robinson. There was later an unsuccessful attempt by Aconex to reopen the case with new evidence.

According to the 2009 Victorian register of member’s interests, Ted Baillieu also has beneficial interests in Aconex and Hawthorn Glen. While Baillieu’s investments are now in a blind trust, according to various media reports the Victorian Premier has, at one point or another, owned between a quarter and one third of Hawthorn Glen. His brother Ian, mother Diana and Baillieu family money-management company Mutual Trust own the rest. According to last year’s BRW Rich List, the extended Baillieu family is worth $466 million.

This dispute highlights the potentially precarious position of a political leader whose family not only has considerable wealth, but is an active and at times proactive investor in private companies that can attract controversy. This is not to suggest that the Victorian Premier had any involvement or knowledge of the corporate bun-fight, but he holds a position where mud can stick, especially if it is stirred by his political opponents.

In 2006, Robinson joined Aconex as a member of their board. He is listed on the Aconex website as a consultant at Allens.

When contacted for comment about the allegations, an Allens spokesperson simply said that the firm were “not going to respond to anonymous claims coming out of cyberspace.”

A missive sent out to Aconex shareholders in January, and published by Firm Spy as potential evidence of an alleged conflict, appears to list Robinson as a representative of Allens, alongside his email address at the firm.

The Allens spokesperson declined to answer questions about whether Robinson still worked at the firm, why he used his Allens email address in Aconex correspondence and whether he was the authorised legal representative at Aconex. Allens also refused to say why Michael Robinson’s biography was removed from the Allens website few days ago. The page, which once linked to Robinson’s bio, now leads to a blank error page:

“Sorry, we can’t find a profile with these details in our database — please try our lawyer search.”

According to Google cache, this is what Robinson’s profile looked like on 19 February 2011: 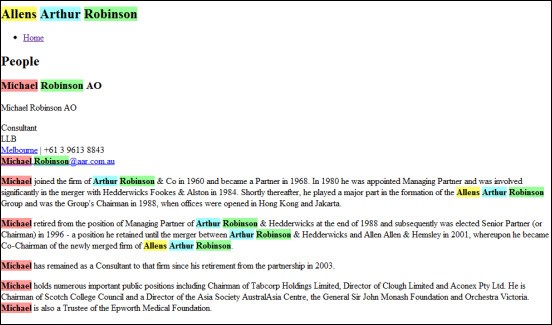 Professor Ian Ramsay, a corporate governance expert at the University of Melbourne, says he doesn’t see any conflict of interest in Robinson’s behaviour.

“I can’t see a conflict. He could have used a company email address or a personal email address but that just doesn’t look like any kind of conflict,” he told Crikey. “He’s not personally benefiting in some way. I don’t see this as a significant issue based on the information provided.”

Allens Arthur Robinson is one of the top commercial law firms in the Asia-Pacific, commanding an extensive client list from the top end of town. In 2010, they were named law firm of the year in the Who’s Who Legal Awards.

All the sloppiness and ignorance that makes sure journalists today don’t have any better reputation than in the old days of the gutter press. And it adds to Crikey’s reputation for left-wing smearing of those who don’t fit its fashions: in this case Ted Baillieu and Michael Robinson with just a hint of spittle in the direction of Ted’s older brother Ian.

A typical touch that it was all secondhand gossip. And another typical touch that the word of someone authoritative like Ian Ramsay who can’t see anything to complain about is buried towards the end of a boring uninformative article.

The “extended Baillieu family” being worth, according to BRW “$466 million” is sheer laziness serving malice, possibly assisted by taking advantage of BRW’s laziness if it didn’t distinguish amongst the very large numbers of descendants of James George Baillieu, many of whom started making plenty of money as active business people at latest from the 1890s. Does that figure include landholdings of Baillieus who are quite remote cousins of the Premier? Does it include the descendants of Sidney Myer and Merlyn Baillieu, including those also descended from June Baillieu? If the aim of this shoddy journalism is to suggest that Ted Baillieu must be very rich or sympathetic to family members who are very rich and that this is a problem (and it is hard to infer any other serious purpose in that drivel) then a bit of disaggregation and identifying of individual owners of property is needed.

And apparently you didn’t know that Ian Baillieu and Michael Robinson were once partners, together, in a leading firm of solicitors. You should be pretty careful about suggesting anything impugning the integrity of either of them. There would be a lot of people willing to stand up and make it expensive for you.

But Rufus, the Murdoch press and their ABC have been doing it to the Government since 2007. Naughty Crikey for daring to give the right wing media a bit of a nudge in the course of slightly balancing the ledger. I wouldn’t lose too much sleep over it, being a trifling non event as you say.

I am not sure that Crikey is “giv[ing] the right wing media a bit of a nudge”. But you seem to be agreeing that Crikey has served us up cheap tripe in this instance so, as you say, it isn’t something to lose sleep over, but it is a little disappointing if one has hopes for Crikey and its contributions.

Anybody with that much money has some ill -gotten gains some where, some time and did some dodgy deals with the devil.