Familiarity brings boredom if not contempt

Familiarity brings boredom if not contempt. There’s nothing surprising really ab0ut South Australian Premier Mike Rann suffering another decline in his popularity rating as measured by Newspoll. It is the fate of almost all long term leaders in parliamentary democracies.

The public finally tire of the familiar and it is hard to think of one leader who was more popular after three election wins than after the first. (Suggestions of exceptions very welcome!)

So no surprise to me that this morning’s Australian has the Rann net satisfaction rating (approval rating less the disapproval rating)  at 29%  -29% compared with his peak back in 2002 of 57%. It is the kind of natural progression that makes sensible state Premiers like Bob Carr decide not to hang around too long.

Worrying about the Greens. The figure that will most alarm some in the Labor Party is the evidence that the Greens are gradually gaining support in South Australia at Labor’s expense. Newspoll puts the latest Greens voting support figure at 14% – up six percentage points since the last state election. The combined primary vote for Greens and others at 28% is just behind the Labor primary figure of 29%.

The Rudd dream lives on. He might be spending a lot of time in the Middle East with a new found zeal to save the world from dictators but Kevin Rudd still thinks of home. There’s time for Queensland’s greatest son to come up with ways to save his flood damaged state from economic destruction. 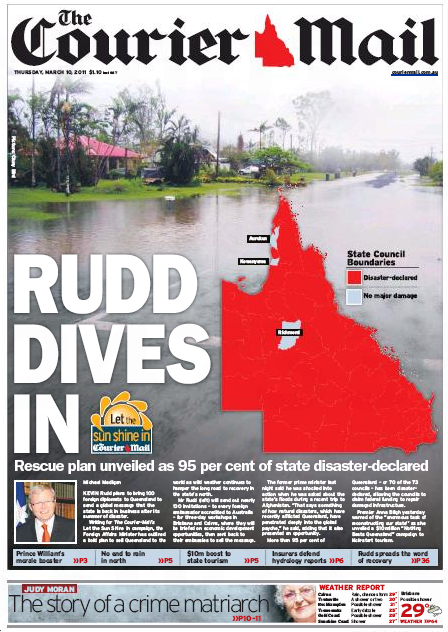 Mr Rudd plans to send out nearly 100 invitations to every foreign ambassador accredited to Australia for three-day workshops in Brisbane and Cairns, where they will be briefed on economic development opportunities, then sent back to their embassies to sell the message.

I’m sure they can hardly wait but the photo opportunities will be great for a man who clearly is still running for Prime Ministerial office.

The kind of conservative who would like to run the USA. New York magazine reminds us this morning that Newt Gingrich, embarking on another attempt to become the Republican presidential candidate, hasn’t just been divorced twice but left both of them when they were sick. Wife #1 was still in hospital recovering from surgery for uterine cancer when she was given the news about being replaced. And the replacement, wife #2, was dropped for wife #3 shortly after wife #2 was diagnosed with MS back in 1999.

But never fear. The post on the New York site quotes from a recent interview with the Christian Broadcasting Network’s David Brody, where the would-be president discussed the issue in religious terms that the voters he hopes to win over may understand:

… There’s no question at times of my life, partially driven by how passionately I felt about this country, that I worked far too hard and things happened in my life that were not appropriate.

Ah yes. The things people will do for love of country!

On the Crikey Republican Presidential candidate election indicator, incidentally, Newt Gingrich is currently rated a 5.6% chance of winning the nomination with Mitt Romney the favourite at 24.5%. The detailed list is on The Stump blog.

Go with the trend. More of those difficult to interpret monthly variations in the employment figures out from the Australian Bureau of Statistics this morning so let’s stick with the less volatile trend numbers.

The Australian economy is growing but hardly galloping along, still being just capable of absorbing the new entrants to the work force without reducing the unemployment rate. 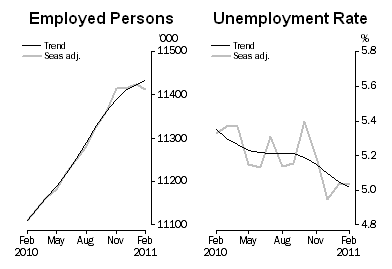 Did Hitler hide behind God – might that have helped? What a lizard …. sorry, newt.

New Cassandra- Thanks for spotting the absence of the minus sign. The correction is made.

Neville Wran won the 1976 election by one seat. The 1978 & 1981 elections were called wranslides. His fourth election in 1984 wasn’t as good as the previous two but much better than 1976. He might have won the 1988 election too had he not retired. Barry Unsworth was decent but he didn’t glow like Wran.