Continued “business as usual” reliance on fossil fuels is expected to lead to a doubling of pre-industrial CO2 levels by about 2050, and possibly a tripling by about 2100, explains the Academy of Science.

Basic physical principles tell us that rising levels of greenhouse gases will warm the Earth’s surface. To answer more complex questions, computer simulations, or models,
of the Earth’s climate are used. These models incorporate the many factors that affect our climate, using mathematical equations based on fundamental laws of nature, together with approximations of some physical processes that cannot be represented exactly (see Box 9). 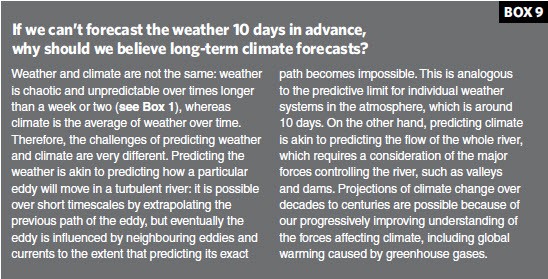 Models simulate reasonably well the broad features of the present climate and the 20th century warming. This, however, does not guarantee accurate predictions into the future; changes could be more rapid or more gradual than projected. Overall, there is good agreement between models and observations at global and continental scales, but simulations are less reliable at the local scale.

Some properties of climate are better captured by models than others; for example, temperature is generally more accurately simulated than rainfall.

Independent of climate models, another important way to estimate the implications of greenhouse gas increases is to examine how climate has responded to such increases in the
past, both over geological time and in recent centuries.

While these two approaches – modelling and studying the past – rely on markedly different methodologies, they both yield broadly similar indications of where global climate is
headed. For example, both methods project a long-term warming of global air temperature of around 3°C (within an uncertainty range of 2°C to 4.5°C) in response to a doubling of the concentration of CO2 in the atmosphere.

Evidence from Earth’s past indicates that changes of this magnitude can have major long-term ramifications, such as sea level rise of many metres.

Continued “business as usual” reliance on fossil fuels is expected to lead to a doubling of pre-industrial CO2 levels by about 2050, and possibly a tripling by about 2100. This emission pathway for CO2, coupled with rises in the other greenhouse gases, would be expected to produce a warming of around 4.5°C by 2100, but possibly as low as 3°C or as
high as 7°C.

If society were to shift rapidly away from using fossil fuels, there would be little reduction in the rate of global warming in the first couple of decades, but warming later this century and beyond would be significantly reduced (see Figure 5.1). 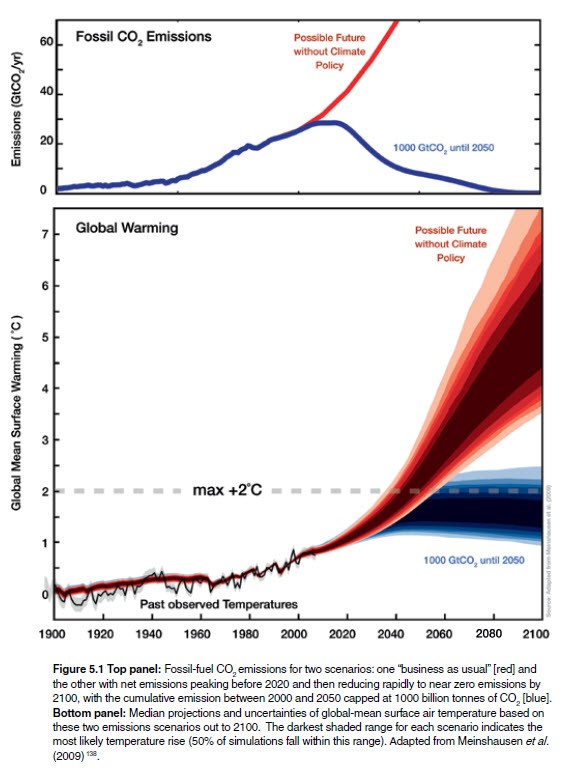 Climate models and basic physical principles indicate that global warming will generally be accompanied by increases in global-average humidity; more extreme hot events such as heat waves but fewer cold extremes; further decreases in the extent and thickness of Arctic sea-ice; shifts in rainfall (generally an increase in the tropics and high latitude regions and a decrease in the subtropics); further ocean warming; melting of mountain glaciers and polar ice sheets; and rising sea levels. Most of these impacts have already been observed (see Question 3).

Warming rates and other climate changes are not expected to be the same everywhere, due to changes in atmospheric circulation or other regional influences. Projections
of future climate for individual regions remain much less certain than global-scale projections. Different models often disagree, so definitive localised projections are not yet
possible.

This is particularly the case for regional rainfall projections. Some models also project substantial changes to phenomena such as El Niño or dramatic changes to vegetation. Many aspects of climate change will likely remain difficult to foresee despite continuing modelling advances, leaving open the possibility of climate change “surprises”.

Some climate change will continue for centuries, and some change will be essentially irreversible on a 1,000-year timescale.

Even if human societies completely ceased greenhouse gas emissions at some time in the future, atmospheric temperatures would not be expected to fall significantly for a
thousand years, as CO2 and heat are only gradually absorbed by the deep oceans. Sea level rise is also expected to continue for many centuries due to the ongoing melting of ice sheets and the gradual thermal expansion of the oceans in response to atmospheric warming.

Global warming above some threshold, believed to lie between about 2°C and 4.5°C, would lead to an ongoing melting of the Greenland ice sheet. If sustained for thousands of years, this would virtually eliminate the ice sheet, raising sea level by about seven metres. Most of the Antarctic ice sheet, by contrast, is expected to remain too cold for widespread melting.

It is possible that increased snowfall over Antarctica may partially offset other contributions to sea level rise.

In addition, accelerated outflow of ice has been observed from Greenland and West Antarctica. This is poorly understood, but could make these ice sheets more vulnerable
to future warming.

To have a better than even chance of preventing the global average temperature from eventually rising more than 2°C above pre-industrial temperatures, the world would need to be emitting less than half the amount of CO2 by 2050 than it did in 2000. To do this on a smooth pathway, global emissions (which are still rising) would need to peak within the next 10 years and the decline rapidly.

The troublesome decline of science education

The Academny of Magic more like it. They have no idea! These are models. They are all total bollocks! Economists have models andlook where they got us!

As someone who has been involved in innocuous forms of mind control for most of his working life, I can tell when someone has taken a bait and you lot have definitely swallowed a whopper if you buy this.

Even the good old Washington Times thinks the gig is up and its time to all take a powder. In a recent editorial entitled: “Close the EPA – It’s time to stop funding carbon mysticism with taxpayer dollars” (March 3, 2011) the WT argues that the EPA “has become little more than an advocacy group for trendy leftist causes operating on the public’s dime.” And that many of the policies Democrats are promoting are so unpopular that they can’t muster the votes to get them through the proper legislative process.”

The EPA has revised the deadlines put on the last of American industry for reporting so called “greenhouse gas” production. A facility that manufactures paper, for example, would have to determine whether it “emits 25,000 metric tons of carbon-dioxide equivalent (CO2e)” per year. The agency guesses that this covers about 10,000 businesses which would then be forced to measure their carbon-dioxide output, maintain detailed records and submit reports to EPA busybodies.
You don’t have to be an Einstein to figure out where all of these businesses are heading. Anywhere that doesn’t have this crap going on..i.e. overseas and that is what wull happen here at 100 mph if this nonsense is introduced.

I hate pollution but you are not going to get rid of fossil fuels anytime soon. Besides there is no peak oil. America has four major capped basins including a massive find under Montana-North Dakota and the stupendous Prudhoe Bay wells in Alaska plus two others which are all capped and which also are huge. They just decided to use up everybody elses first before they bring them on stream at $200 a barrell.. Russia’s got heaps and Indonesia also has a massive capped basin as was reported about three years ago in their local rags.

When it comes on stream, it will bring Indonesia into the first world in the next 2o years.
Hey don’t believe me if you don’t want to! But don’t believe the rubbish being peddled at the moment either.

As for climate change – it is happening at a very mild pace but any day now I feel a black swan moment threatening.

Oh the Washington Times. Isn’t that printed in Fyshwick?

Just a few weeks ago, Garnaut was quoted on this blog as saying “Recent data and events have confirmed that the IPCC report, if anything, underestimated the climate change impacts on global temperatures, sea level rises, and the intensification of weather events. He says climate sceptics cannot draw any strength from the “real science” of the past five years. “I wish that were not so.”

Yet what does his report put in writing?
“global temperatures continue to rise around the midpoints of the range of the projections of the Intergovernmental Panel on Climate Change (IPCC) and the presence of a warming trend has been confirmed.”

So 3 weeks ago the IPCC underestimated global temps, and today its “around the midpoints”.

He misleads that temps continue to rise, as global temp cooled this decade.

“global temp cooled this decade”…ah, the Prof. Andrew Bolt thesis, done by nicely extrapolating the IQ of his readers.