NSW Labor deluded and on the nose

They really know how to delude themselves in the New South Wales Labor Party.

Spinning excuses. They really know how to delude themselves in the New South Wales Labor Party.

Despite months — probably years — of opinion polls showing the state government is completely on the nose, the move is on to blame Julia Gillard and her carbon tax for the impending election defeat.

From The Australian this morning: 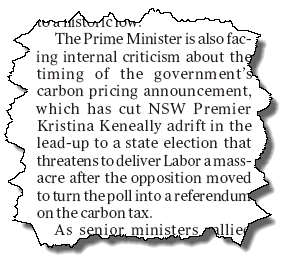 Ms Keneally and her Treasurer, Eric Roozendaal, claims the story, are said to be furious at the timing of the carbon tax announcement.

How do these NSW spinners get journalists to write this bunkum? The forthcoming defeat will be all their own work. And, in any case, the intellectual giants of Sussex Street should remember that it was their plotting that made Ms Gillard Prime Minister. In politics you reap what you sow.

A little dash of realism. My quote for the day:

”The thing that struck me is … the wide perception that I keep hearing that Australia shouldn’t go first. Coming from Europe, that sounds slightly bizarre because there are 30 countries in Europe that have had a carbon price … since the beginning of 2005.”

– Jill Duggan, from the directorate-general for climate action at the European Commission points out how in Europe there had been no job losses as a direct result of pricing carbon and no backlash from householders, many of whom were unaware the scheme was in operation.

It couldn’t happen here could it? The latest study of the United States real estate market by the information and analytics company Core Data shows that 11.1 million American families owe more on their mortgages than their homes are worth.

At the end of last year 23.1 percent, of all residential properties with a mortgage were in negative equity, up from 10.8 million, or 22.5 percent, in the third quarter, with an additional 2.4 million borrowers being close to negative equity with less than five percent equity in their home.

Nevada had the highest negative equity percentage with 65 percent of all of its mortgaged properties underwater, followed by Arizona (51 percent), Florida (47 percent), Michigan (36 percent) and California (32 percent). 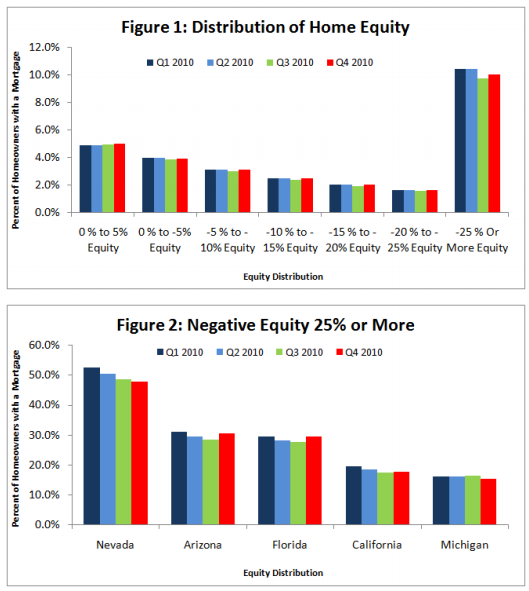 CoreLogic suggests that the consensus view is that US home prices will fall another 5 percent to 10 percent in 2011. If so, the most that negative equity will rise is another 10 percentage points, all else being equal.

The desire to punish the punters. I’m not sure why it is exactly but there continually are calls from conservative economists around the world for central banks to raise interest rates to combat inflation which is not actually present. Overnight the OECD released this report: 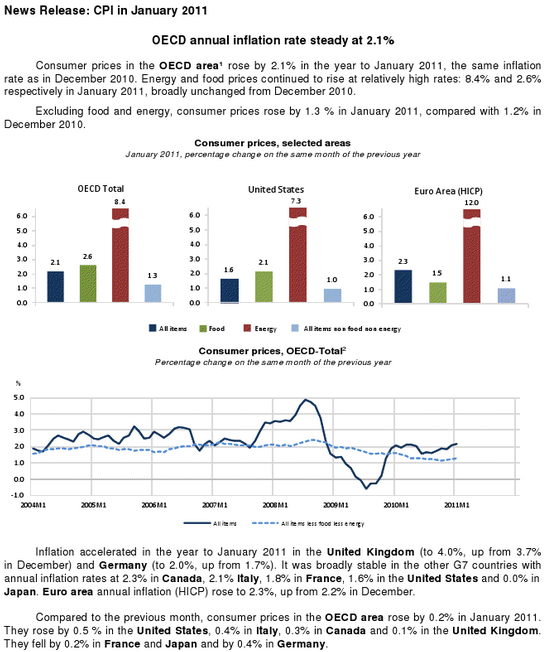 Isn’t it bleeding obvious? High interest rates and low inflation shift money towards the financial capitalist class at the expense of workers, the unemployed, and everyone not super-rich.

Someone please forward that Jill Duggan quote to the Office of PM&C. Surely someone over there will know what to do with it.

Jill Duggan touches on a core problem in this debate – “ignorance”.
And those parts of the media that could be injecting some reality into this debate, “educating”, are more intent on not circulating facts that debunk the rhetoric of the party they pimp for, because ignorance, fear and prejudice are what it appeals to, in the community, for it’s electoral success.

1. Which 30 countries? How ‘important’ either fiancially or population-wise are they?

2. How much mining and related industries are they involved in, within their own country? Our loss of competitive edge will be through the add-on costs of our mining/electricity industry, in the event of a carbon price/tax/call it what you will.

I find climate change alarmists just as offensive as climate change deniers, surely scepticism is the sensible approach at this time. I find it very difficult to find ANY dispassionate analysis of claims or counter-claims from either side of the debate. The articles on Crikey over the past few days are just total, unsupported, propaganda from the alarmist side of the debate.