New research claims the vast majority of Australian elite athletes are unhappy about sports stars promoting junk food and alcohol. And most learn to live without it.

New research from the University of Sydney claims the vast majority of Australian elite athletes are unhappy about sports stars promoting junk food and alcohol. A study of 682 Australian athletes, swimmers, basketballers and rugby league players (conducted with help from the National and State Institutes of Sport) concludes:

“Elite and sub-elite Australian athletes perceive themselves as having a role in promoting healthy lifestyles to the general public and do not favour junk food or alcohol advertising or involvement of athletes in product promotion.”

An abstract of the (as yet unpublished) study in the Journal of Science and Medicine in Sport, goes on to say:

“The majority perceived they should be role models for the general community to be active (92%) and have a role in obesity prevention (63.8%). Despite a fifth (20.9%) believing junk food and alcohol advertising in sport to be acceptable, few (3.7%) thought elite athletes should promote junk food or alcohol.”

In other words, four out of five athletes thought it unacceptable for sport to advertise junk food and alcohol and fewer than one in 20 athletes favoured their mates selling this stuff.

One of the study’s co-authors is Professor Stephen Colagiuri, one of the government’s advisers on diabetes, who has been fiercely critical of Cricket Australia for accepting money from fast food giant KFC. In March 2008, he wrote to the Medical Journal of Australia asking Cricket Australia to “consider its responsibilities to Australia’s children and youth and review its sponsorship by KFC”.

Cricket Australia’s lack of reaction was one of Professor Colagiuri’s reasons for undertaking the research. “Things have deteriorated since then and this summer was just atrocious. We feel incredibly strongly about it,” he said. 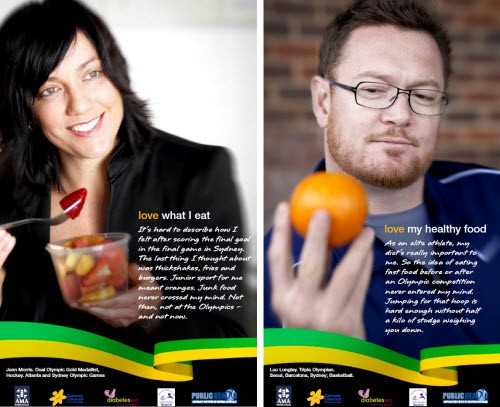 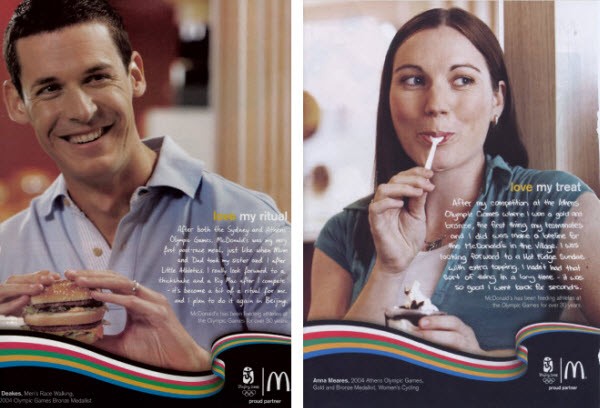 Meanwhile, athletes who make money from endorsements are coining it, but they’re not making most of their money from selling fast food or soft drinks. And none would go broke if they were forced to quit.

Cricket captain Ricky Ponting probably has the highest income from endorsements in Australia, with an estimated $2 million a year. But none of this is from food, although his Cricket Australia salary may be bolstered by KFC’s sponsorship of the sport.

Shane Warne probably now challenges Ponting for top spot, after years down the list. His current campaign for McDonald’s — on TV, radio, billboards and print — is thought to be worth at least $500,000. Warne also promotes Spinners underwear, Advanced Hair Studio and 888 Poker, and has 13 other endorsements or business partnerships, but none of these is food or drink.

Third place probably goes to Brett Lee, the fresh-faced fast bowler who endorses Gatorade, Weet-Bix (a healthy food) and a couple of energy drinks, as well as a raft of cars, watches, oils, drinks, bats and cricket gear for the Indian market. “Since including Gatorade in my hydration strategy,” Lee tells fans, “my bowling has been consistently quicker and the accuracy is still there. It’s the perfect balance.”

Another top earner is ex-Test cricketer Adam Gilchrist, who has long been one of Milo’s two brand ambassadors (the other is would-be cricket captain Michael Clarke). Gilchrist spruiks Nutriway multivitamin supplements and has a $2 million lifetime contract with German sports-goods manufacturer Puma, but no other foods or drinks.

Socceroo Tim Cahill endorses Gatorade and six other products, of which Weet-Bix is the only food. Fellow Socceroo Harry Kewell picks up a cheque from Solo, while goalie Mark Schwarzer is a brand ambassador for Cottee’s. Both of these drinks are marketed by Schweppes.

As to how much they get for each of these, no one is saying. But Sportspeople’s managing director Robert McMurtrie — who manages netballer Liz Ellis — says the fee depends on how commercialised the sport is and how famous the athlete is.

“An ambassador to women’s basketball could get as little as $2000,” he told Crikey. “A campaign like Warne’s might net him $0.5 million to $1 million.”

4 out of 5 athletes might not like it, but there’s a whole bunch of ‘if your kids are fat its your fault so stop whining’ types over on your first post who don’t seem to mind it.

Eighty percent of athletes may not approve but you can bet your sweet life they would endorse the junk if the opportunity to make money was there.

What mystifies me is that any consumers believe athletes use the products they are paid to promote. Sure, they might if it’s a car, a watch, booze etc and part of the marketing deal is freebies for the term of the contract. But would they choose those brands if they had to pay for them? That’s a survey result I’d like to see.