The trip to the US and meeting with Barack Obama saw a big increase in television coverage for Julia Gillard.

The trip to the US and meeting with Barack Obama saw a big increase in television coverage for Julia Gillard, but the two leaders clearly have very different priorities on their minds — although the hip pocket is somewhat of a common theme, Obama struggling through the slowest of recoveries, while Gillard deals with an electorate that really wants to do something about climate change, as long as it’s nothing real.

Kevin Rudd maintains his high profile as Libya continues to dominate international news, the stories that this is part of a long term plan to get the leadership back are surely fanciful journo imaginings? We all know that politicians have to have mighty healthy egos to survive, which can sometimes lead to delusion … but that would be really stretching the delusional envelope.

The seemingly endless saga of the flood levy saw Nick Xenophon shoot up the list. Is it really over now? And was it all worth it? Jury out on both of those questions, but everyone’s clearly on a pretty steep learning curve in Canberra at the moment. 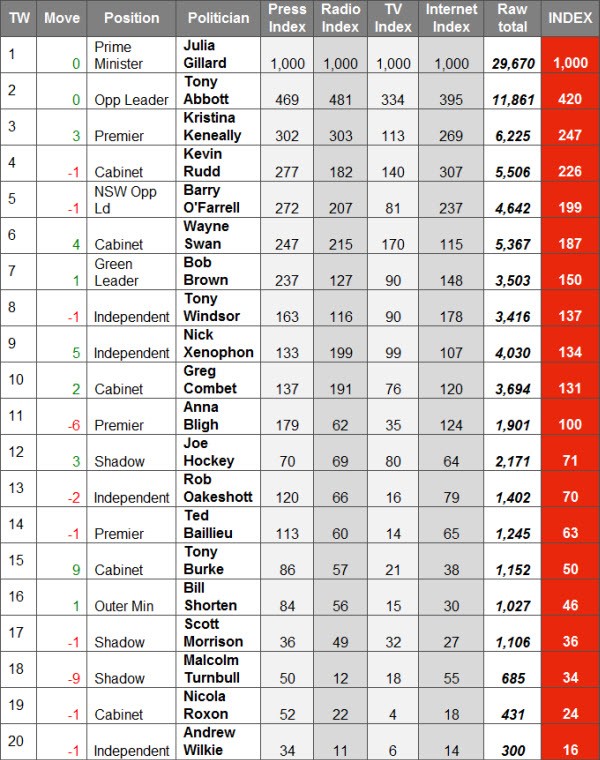 Carbon tax talkback died down considerably after the death threat event, but it remained heavily opposed, with more than three-quarters of callers men, most of them more concerned about the economic cost than the “lie”.

In the 21st Century, if you’re trying to be oh so outré, oh so shocking, because you’re a freakin rock star fashion designer from Mars, remember that pretty much anything you say anywhere can go immediately worldwide — then again maybe he’s just a raging anti-Semite.