The Long View: Tuvalu a nation sinking as the world warms

In my home land of Tuvalu, a person without land is known as a fakaalofa -- "a person deserving pity". Not that many Tuvaluans want pity, despite the real possibility they will lose their island to the increased effects of climate change, writes Reverend Tafue Lusama. 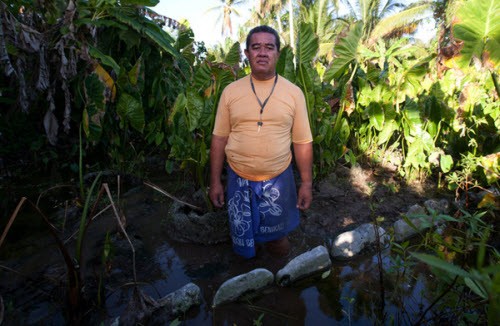 (Niu Loane stands in his pulaka pit during the king tide)

In my home land of Tuvalu, a person without land is known as a fakaalofa — “a person deserving pity”. Not that many Tuvaluans want pity, despite the real possibility they will lose their island to the increased effects of climate change.

It is getting very difficult to catch fish now, as the ocean temperatures have definitely changed. When I grew up, my grandfather and my father used to teach me about the shift from one season to the other, and how it affects the movement of the fish in the sea from place to place. These ways have all been upset because of the changing weather patterns.

Coral bleaching (the result of ocean acidification and rising sea temperatures) is becoming very noticeable, and has contributed to a sharp decline in fish stocks. As a result, the cost of fish caught around our islands has become very expensive. It is cheaper for a person to walk into a shop and buy a tin of fish, one that is processed thousands of miles away, than it is to buy fresh fish from local fishermen.

Climate change is also reducing access to locally grown foods such as bananas and paw paw. We’ve experienced an increase in the frequency of strong winds and cyclones visiting our shores — fruit are regularly torn from branches before they can even be harvested.

During the high tides, salt water now spills onto our vegetable and fruit gardens, even bubbling up through the ground in some areas. Rising salinity has forced many people to give up growing traditional root crops such as taro and pulaka.

The loss of these locally grown foods has contributed to an increased reliance on imported processed foods, in turn causing a rise in health conditions like diabetes and hypertension previously little known in Tuvalu. There is a very real concern that associated increased health costs could cripple many small Pacific island states without the resources to adapt.

When we talk about the impacts of climate change, it’s important to remember that our people depend on land. If we have land, we have life. When our land is being gradually eroded by the sea, we are literally seeing our life being eaten away. We won’t be able to give life to our children and grandchildren — that is how severe it is.

Things are shifting rapidly now, with increased impact on the land and people. Many Tuvaluans worry that an international agreement won’t be reached in time to save our island and way of life. We are dealing with the prospect of having to relocate, either further inland as the coast erodes, or to another country when there is finally no more land. Sea levels are rising by five to six millimetres annually, and Tuvalu sits just four metres above sea level. This is something I’m not sure a lot of people understand — the threat is real.

Many of my people, including myself, regard climate change as an injustice. Tuvalu has not developed or grown rich by emitting greenhouse gases, but is amongst those countries hit hardest by climate change. We’ve been raising our concerns and voices with the international community and the industrialised countries, and still we are being ignored. This is a grave injustice.

To comment on this article, head over to our environment blog Rooted.