New-look <em>7.30</em> … YouTube gets professional … Murdoch at this most powerful …

Finally, it appeared -- all shiny and new, fronted by Leigh Sales and Chris Uhlmann. So what did the media make of the new-look 7.30? Newsreader on gays: from 'disgusting' to support.

The verdict is in on 7.30. Finally, it appeared — sans-Report, sans chairs in some cases, but all shiny and new fronted by Leigh Sales and, from Canberra, Chris Uhlmann. So what did the media make of the new-look 7.30?

Tom Dusevic, The Australian: “The new 7.30 tonight did not live up to ABC TV’s hype of a new era for current affairs. But that doesn’t mean the first show was a failure or that it doesn’t have room to develop its own appeal.”

Tim Dick, The Sydney Morning Herald: “…judging on the first episode of 7.30 alone, there are far more reasons to like it than not. It may have lost Kerry O’Brien and two words — ‘The’ and ‘Report’ — but it has gained Leigh Sales, recalled Chris Uhlmann and given its audience a fresh injection of compelling television to justify what has been, for the ABC at least, considerable hype.”

Tony Wright, The Age: “It’s the new all-disco, all-swirling, lots-a-moving Kerry-free 7.30… And by crikey, the re-designers haven’t held back… It’ll probably grow on us. Particularly those of us who love computer games and never quite grew out of Saturday Night Fever.”

So what did you think…? 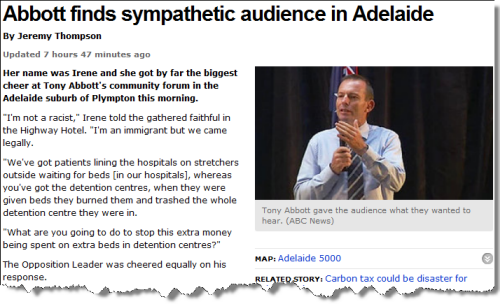 Where precisely did this “sympathetic audience” come from? Adelaide Now! has the answer:

“Mr Abbott said the attendees had been invited by the office of Liberal Senator Simon Birmingham.”

Not that that detail needed to be shared with ABC readers. It might have undermined the main point of the story… — Jeremy Sear of Pure Poison

One and a Half Men: Sheen finally fired

“He’s not ‘winning’ any more: Charlie Sheen has been fired from his starring role in Two and a Half Men, two weeks after the actor unleashed a torrent of venom aimed at his employers and especially the show’s producer Chuck Lorre in a series of rambling, sometimes incoherent interviews.” — USA Today

“YouTube, the video site owned by Google, formally announced on Monday that it had acquired Next New Networks, a Web video production company, in its biggest effort yet to move beyond short, quirky home videos to professionally produced content.” — The New York Times

Murdoch at 80: at his most powerful?

“[W]hile critics may wish the Australian-turned–American would simply retire, in truth the business he runs has never been more powerful than it is now, as he stands on the threshold of completing his biggest ever transaction, the £8bn or so buyout of BSkyB’s other shareholders.” — The Guardian

“AOL has closed its $315 million acquisition of The Huffington Post. The deal was originally announced on February 6, so it’s taken a month for the acquisition to close. As we heard a few weeks ago, Arianna Huffington is now the President and Editor In Chief of all of AOL’s media properties, which is now called the Huffington Post Media Group (and which includes TechCrunch)… Along with the closing of the acquisition, AOL has also poached a number of talented new writers to join its newly formed team. — TechCrunch

“Qatar-based news outlet Al Jazeera has launched a Twitter dashboard to illustrate tweets about uprisings and revolutions around the world. The dashboard tallies the daily number of tweets about developments in each listed country (the site is currently tracking Egypt, Yemen, Libya and Bahrain) and shows the average number of such tweets per minute for each listed country. — Mashable

Me, I’ve got baggage – if I want to see “Leigh Sales” sort of journalism (“Tim Tam’s” to the Right, “Laxettes” to the left), I’ll buy a Murdoch paper – for variety, and a different aspect, I used to like watching O’Brien’s report.

Im surprised Abbotts ABC didn’t have him as feature guest on the first 7-30, particularly as the PM is away. They delight in headlining his every word and as he was too petrified and lacking in ticker to appear with Kerry O’Brien for the last 3 months of his tenure Abbott would have been far more at home with the present duo, nice friendly chatty questions, well done, kiss my backside and all that.

I’m sure everyone noticed the amazing resemblance to Frontline in the ads leading up to the show. The show is about as in depth as Frontline too. One show was enough for me. Who wants to hear Chris Uhlman’s silly comments on Federal politics couched as an interview with Leigh Sales? It looks very cheap and nasty.