Ex-Test spinner Stuart MacGill is adamant sports should not accept money to promote food brands like KFC and McDonalds. "I don’t think you can have any of us advertising junk food to be honest," he tells Crikey.

Former Test spinner Stuart MacGill is adamant sports and sports stars should not accept money to promote food brands like KFC and McDonald’s. “I don’t think you can have any of us advertising junk food to be honest,” he told Crikey.

MacGill, who retired from Test cricket in 2008 and has been making a career in commercial radio, is particularly concerned about Test cricketers’ endorsement of KFC, which is owned by the world’s largest fast-food company, Yum Brands.

For the last eight years, KFC has been a “gold partner” of Cricket Australia, spending up to $8 million a year on marketing and promotion linked to the sport. For this it gets TV ads, endorsements from the Australian team and Channel Nine commentators, a KFC Classic Catches competition and billboards at the games. KFC also gets naming rights to the Big Bash Twenty20 competition, televised by Fox Sports, and the title of Australian cricket’s official fast food restaurant. All up, it probably pays Cricket Australia between $1 million and $2 million a year.

“The problem for me is that KFC and Cricket Australia are hitting parents where they’re vulnerable,” said MacGill, who has two young children. “Parents are already under a lot of pressure from kids to buy this stuff and when you get the Australian cricket team endorsing it you just increase that pressure. It’s just wrong in so many ways.

Just before he retired, MacGill refused Cricket Australia’s instruction to take part in a TV ad for KFC. “They had just accused me publicly of being unfit and told me I would have to lose weight if I wanted to play again. And I just hit the roof. I said: “you’re telling me I’m fat and you want me to do a KFC ad? Well, you’ve got to be crazy. I’m not going to do it.'”

Australia’s elite cricketers are required to do KFC ads for free as part of their contract with Cricket Australia, and MacGill had no right to refuse. But Cricket Australia did not force the issue. “They backed off pretty quickly,” he said. “They could see that the press might say something, and if the press didn’t I would.”

MacGill also has concerns about Milo’s junior cricket program, which has been running since 1993 and has introduced 5 million young Australians to the game: “I don’t think Milo would exist any more in Australia if it weren’t for Milo cricket. It’s been the greatest marketing exercise of all time.

“It’s not even called cricket, it’s ‘Milo in2cricket’. First day they turn up they get a bat, a bag, a hat and a shirt, which are all branded Milo, then they have to wear that every time they play. It’s just a brandathon. At least it makes my kids drink milk, but I don’t really want them drinking chocolate milk, and yet we’ve got Milo in our house.”

Rob de Castella, Australia’s former world-champion marathon runner, shares MacGill’s concerns: “I certainly have major problems with sports men and women and organisations taking money from fast food or junk food companies. I had a couple of offers to do ads for fast food companies when I was an athlete and I always turned them down because I had a moral objection.

“I’d say to anyone considering it: be very conscious of the effect your endorsement is going to have on the future lives of young Australians. And it’s not just the physical consequences of obesity, it’s the social and emotional consequences as well.

“Some sportspeople don’t care. Some are driven by agents, who want their fees and commissions, like any other business. But the individuals have got to recognise they’re putting their reputation alongside something that they may not really want to be associated with.”

MacGill said today’s top young cricketers don’t even think about what they’re being asked to do: “They just know they’ve got to turn up, do what they’re told and there’s going to be lots of media.”

KFC defends its use of cricket to sell its wares. “We’re proud of our sponsorship of cricket in Australia which, aside from promoting KFC, also funds a large number of community programs across the country to encourage children to play the game and be active,” a spokesperson said. “It is a positive initiative and we are delighted to be involved.”

It also defends its high-fat, high-energy meals, telling people to think of KFC as “something which should be enjoyed as an occasional treat and as part of a balanced diet that includes exercise”.

Something which you won’t find in a KFC ad. Or the fact its Tower Burger, advertised by fast bowler Doug Bollinger and cricket commentators Bill Lawry and Tony Greig this summer, has one-third of an adult’s daily energy needs, or almost a half if you add French fries.

According to NSW Cancer Council nutritionist Kathy Chapman: “KFC has no redeeming nutritional qualities, and is full of fat and kilojoules, and is the sort of food product that displaces more nutritious foods (like a home cooked dinner of chicken and vegetables). It’s the worst of all.” 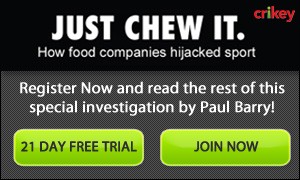 Paul — can you pls get in touch — I have some related stuff you might be interested in on this. [email protected]

to add to all this, and to illustrate that KFC’s stated position about their food is total bullshit, they are currently running a non-sports campaign in which they are encouraging their consumers to eschew food for “pigeons”, home-cooked family dinner, etc for their fat filled kiljoule-busting rubbish.

About bloody time one of our elite athletes/role models grew some balls and a spine.

Good on you MacGill..

Actually that reminds me why we don’t eat that shit. My wife popped in to the local KFC some weeks ago and got a snack of 2 pieces and chips and spent the next several days on the Karzee.

It seriously gives her the shits.