Academy of Science: how has climate changed during the recent past?

Measurements from many hundreds of thermometers around the globe, on land and over the ocean, show that the average near-surface air temperature increased over the 100 years to 2009 by more than 0.7°C.

Global average temperatures have increased over the past century

Measurements from many hundreds of thermometers around the globe, on land and over the ocean, show that the average near-surface air temperature increased over the 100 years to 2009 by more than 0.7°C.

Many of these instrumental records, which began in the second half of the 19th century, were not initially designed to be used for climate monitoring. This means they have to be carefully analysed to deal with changes in instruments, observational practice, location, and the growth of cities (see Box 3).

After accounting for these issues, temperature increases are largest in the continental interiors of Asia and north Africa, regions which are distant from major population growth areas (see Figure 3.1 and Figure 3.2). 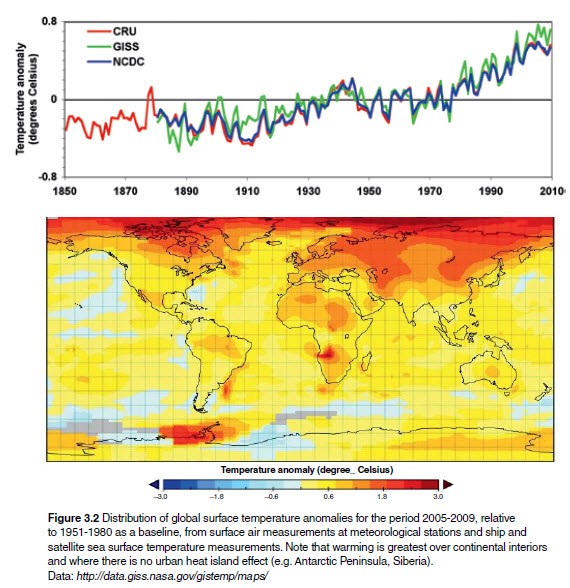 The rates of observed near-surface warming increased in the mid-1970s. Since then, the global land surface has warmed at about double the rate of the ocean surface. Measured warming over the past 50 years was nearly twice the rate of that for the past 100 years.

The last decade has been the warmest yet recorded (see Box 4). 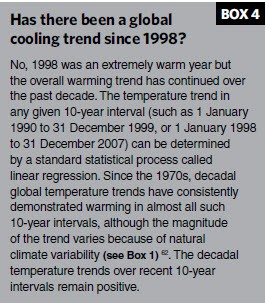 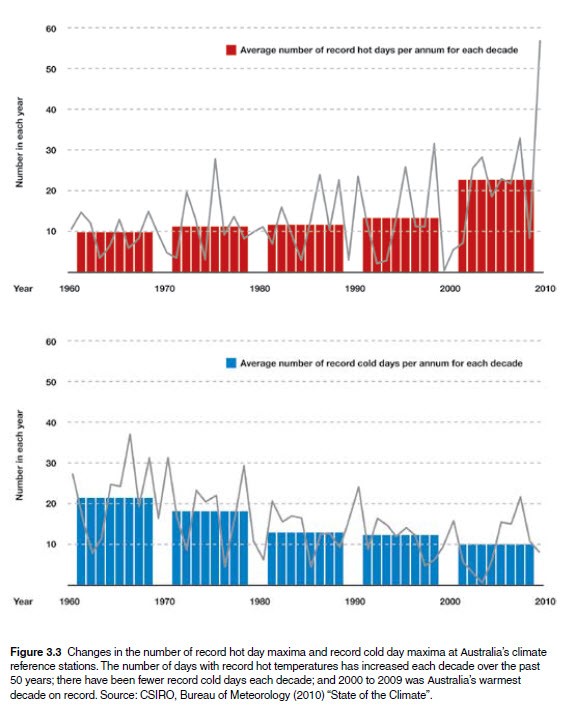 Over the past three decades, satellite observations of temperature at the Earth’s surface and in the lower atmosphere have also shown warming (see Box 5). In contrast to the surface warming, the atmosphere above about 15 km elevation (the stratosphere) has
cooled over the past four decades.

This provides one clue that the observed warming is due to human activities. 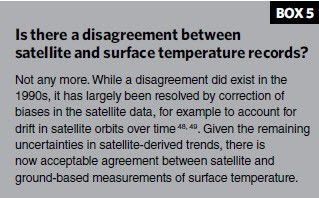 The upper 700 metres of the ocean is storing about 90% of the additional heat absorbed by the Earth’s whole climate system since 1961. The surface ocean has warmed by 0.5°C from the 1970s to the early 2000s.

Averaged over the upper 700 metres of the ocean, the average warming is much smaller, only about 0.1°C, but very important because of the large amount of stored heat this represents.

Temperature observations are not the only evidence of recent climate change

Australia’s climate has changed along with the global climate 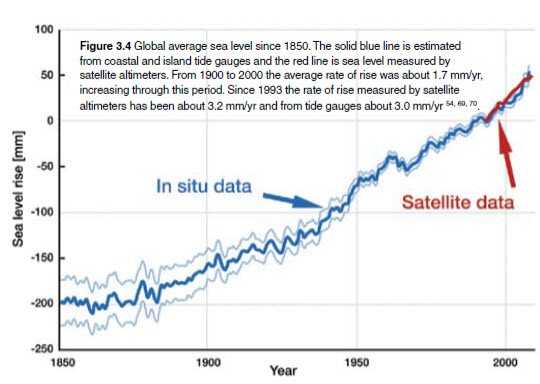 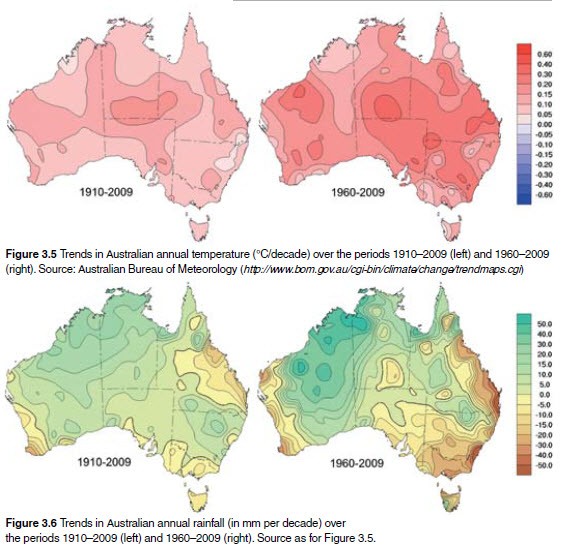 It is likely that these trends are related to shifts in pressure patterns over southern Australia, particularly the intensification of the subtropical high pressure belt.

Regional ocean currents have also changed. For example there has been a southward shift of the Antarctic Circumpolar Current and an increasing southward penetration of the East Australian Current, associated with wind changes in the South Pacific.

Just a question–don’t bite my head off–could some of this be caused by deforestation and aridification acting on the climate through surface changes to albedo and water cycles, independently of the greenhouse-gas mechanism?

Yes and volcanic activity and methane from cattle / beasts.

@ Freecycle, Deforestation and aridification also release CO2 equivalent (burning and rotting vegetation and increases in livestock on the resulting land). As deserts and clear land have higher albedo than forests, albedo change would actually be a cooling influence (hence Stephen Chu’s suggestion that we should paint all roofs white ). This is one of the reasons melting arctic ice is a concern; as the ice melts the albedo drops leading to the ocean absorbing more heat in a vicious cycle.

There are some changes in the water cycle due to the dramatic increase in irrigation across the world leading to higher evaporation rates, but the effect on temperature is an order of magnitude or two lower than that caused by CO2.

Indeed, freecountry, something that strikes me looking at the 1960-2009 rainfall anomaly map is how many of the greatest rainfall declines are concentrated around areas where urbanisation has replaced vegetation. I wonder if there are some local effects going on there (aerosol or particulate pollution and/or drop in transpiration, as well as albedo change), superimposed on the more regional and global trends.

Deforestation does have a definite impact on local climate, which exacerbates the climate change problem where it occurs.

On the other hand, there is the potential to quickly reverse warming on a local scale through innovative solutions that address this phenomenon, like this one:
http://arstechnica.com/science/news/2011/03/switching-biofuels-could-do-a-double-whammy-on-climate-change.ars

However, this is all independent of the global impact of climate change. Most of the energy introduced into the climate system is trapped in oceans, and there isn’t much we can do to reduce that problem by using mechanisms that address the issue on a local scale. Also, many of the places experiencing the largest warming are well away from any population centres.

The struggle to halt the global warming trend will be helped by local solutions (which have global benefits anyway), but it will also require a real effort to transition to a low-carbon economy. In the end, all the models show that the root cause of climate change is greenhouse gases, so they should be the primary target of any efforts.