In a recent speech, Professor Ross Garnaut warned that the latest scientific trends suggested increases in temperatures and sea-level rises were worse than predicted by the IPCC in 2007. Dr Andrew Glikson explains why.

“We’re simply talking about the very life support system of this planet” — Joachim Hans Schellnhuber, Director of the Potsdam Climate Impacts Institute and Climate Advisor to the German Government.

In a recent speech, Professor Ross Garnaut warned that the latest scientific trends suggested increases in temperatures and sea-level rises were worse than predicted by the Inter-Governmental Panel on Climate Change in 2007. “I think the general tendency is to confirm the IPCC under-estimated the impacts,” Professor Garnaut said.

So what did he mean by this, and why did the IPCC under-estimate the impacts?

Since the inception of the IPCC in 1989, contributing climate scientists have had to labour under restrictive conditions that, in some instances, resulted in compromised climate change projections, most particularly in terms of ice melt rates, sea level rise and projected extreme weather events.

Extended periods of scientific consultations and debate, aimed at reaching consensus, have in some instances led to conservative estimates of the scale and pace of climate change, to be followed by further editing by government officials (including US, China, Russia, Saudi Arabia) with political agendas.

Following the release in February 2007 of the fourth IPCC Assessment Report, based on up to 2005 data, an international group of climate scientists reported atmospheric CO2 concentrations, temperature levels and sea level rise rates have increased at the maximum of, or above, IPCC projections. 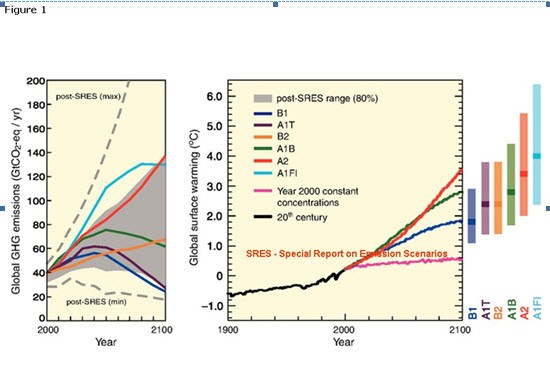 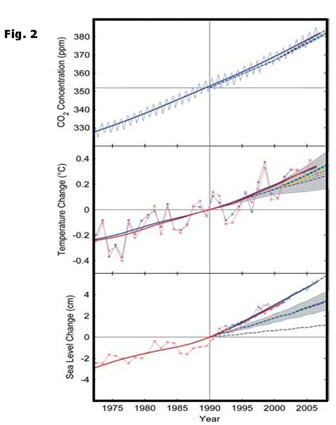 It follows, at least in this respect, IPCC projections can be regarded as reliable but minimum estimates of climate change trends.

“Overall, these observational data underscore the concerns about global climate change. Previous projections, as summarised by IPCC, have not exaggerated but may in some respects even have underestimated the change, in particular for sea level.”

David Wasdell, an accredited IPCC reviewer, pointed out the report has overlooked positive feedback loops which involve amplification dynamics of climate change within the atmosphere-ocean-cryosphere system, examples including:

IPCC projections (Figure 1) give an impression of gradual climate changes, taking only limited account of the effects of continental ice melt dynamics, the opening of the Arctic ocean, potential collapse of the NATC, melting of the Himalaya glaciers (the so-called “3rd pole”) and methane release from melting permafrost, warming Arctic water bodies and drying and burning tropical forests: 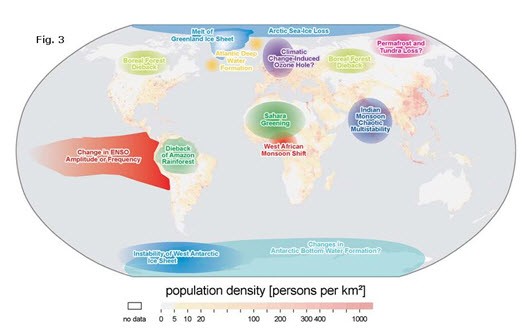 In so far as the IPCC-2007 report has led to a definition by the EU of a 2 degrees C maximum permissible mean global temperature rise, according to Hans Joachim Schellnhuber: “But the two degree guardrail is somewhere around or above the tipping point. So two degrees is not a good compromise. It is the dividing line between dangerous and catastrophic climate change.”

Admitting the rate of ice sheet melt dynamics were yet unclear, IPCC-2007 sea level rise projections, estimated as 0.18-0.59 metres by 2010, are considered to be under-estimates.  Rahmstorf et al suggest 0.5-1.4 metres SL rise above 1990 by the end of the century.

“Deglaciation, disintegration of ice sheets, is nonlinear, spurred by amplifying feedbacks. If warming reaches a level that forces deglaciation, the rate of sea level rise will depend on the doubling time for ice sheet mass loss.” …

“Business-as-usual scenarios result in global warming of the order of 3-6°C. It is this scenario for which we assert that multi-metre sea level rise on the century time scale are not only possible, but almost dead certain. Such a huge rapidly increasing climate forcing dwarfs anything in the palaeo-climate record. Antarctic ice shelves would disappear and the lower reaches of the Antarctic ice sheets would experience summer melt comparable to that on Greenland today.”

Following the 1998 El-Nino peak, the rise in mean global temperatures continued, the period 2000-2010 being the warmest in the instrumental record. 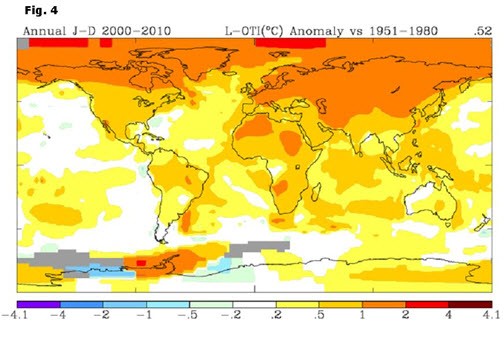 In contrast to the impression of gradual climate projections, which may be obtained by IPCC projections (Figure 1), the spate of heat waves/fire, hurricanes and floods around the world, which doubled in frequency between 1980 and 2009 (Figure 5), manifests the response of the atmosphere-ocean system to increased radiative forcing by anthropogenic greenhouse gas, namely the over 320 billion tonnes carbon (GtC) emitted since the 18th century, more than 50% the original inventory of the atmosphere. 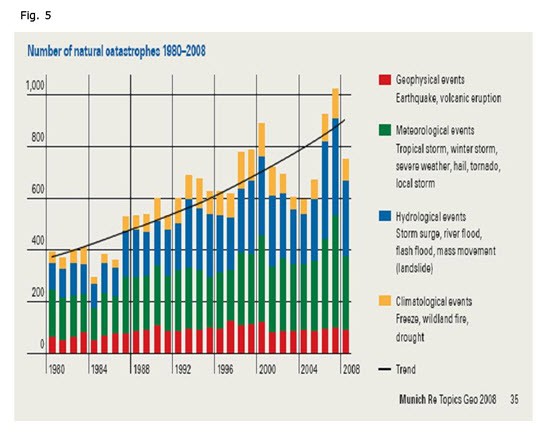 Figure 1. Left Panel: Global GHG emissions (in GtCO2-eq) in the absence of climate policies: six illustrative SRES marker scenarios (coloured lines) and the 80﻿th﻿ percentile* range of recent scenarios published since SRES (post-SRES) (grey shaded area). Dashed lines show the full range of post-SRES scenarios. The emissions include CO2, CH4, N2O and F-gases. Right Panel: Solid lines are multimodel global averages of surface warming for scenarios A2, A1B and B1, shown as continuations of the 20﻿th﻿-century simulations. These projections also take into account emissions of short-lived GHGs and aerosols. The pink line is not a scenario, but is for Atmosphere-Ocean General Circulation Model (AOGCM) simulations where atmospheric concentrations are held constant at year 2000 values. The bars at the right of the figure indicate the best estimate (solid line within each bar) and the likely range assessed for the six SRES marker scenarios at 2090-2099. All temperatures are relative to the period 1980-1999.

Figure 2. Changes in key global climate parameters since 1973, compared to the scenarios of the IPCC [shown as dashed lines (A1FI, light blue; A1B, purple; A1T, blue; A2, red; B1, yellow; and B2, green) and grey ranges in all panels].

(a) Monthly carbon dioxide concentration and its trend line at Mauna Loa, Hawaii (blue) up to January 2007, from Scripps in collaboration with NOAA. (b) Annual global-mean land and ocean combined surface temperature from GISS (red) and the Hadley Centre / Climatic Research Unit (blue) up to 2006, with their trends. (c) Sea-level data based primarily on tide gauges (annual, red) and from satellite altimeter (three-month data spacing, blue, up to mid-2006) and their trends. All trends are non-linear trend lines and are computed with an embedding period of 11 years and a minimum roughness criterion at the end, except for the satellite altimeter where a linear trend was used because of the shortness of the series. For temperature and sea level, data are shown as deviations from the trend-line value in 1990, the base year of the IPCC scenarios.

Figure 3. Map of potential policy-relevant tipping elements in the climate system overlain on global population density. Subsystems indicated could exhibit threshold-type behavior in response to anthropogenic climate forcing, where a small perturbation at a critical point qualitatively alters the future fate of the system. They could be triggered this century and would undergo a qualitative change within this millennium. We exclude from the map systems in which any threshold appears inaccessible this century (e.g. East Antarctic Ice Sheet) or the qualitative change would appear beyond this millennium (e.g. marine methane hydrates). Question marks indicate systems whose status as tipping elements is particularly uncertain. Lenton et al, 2008.

This presentation is unclear – the explanations of the figures should be directly below the figures.

Some of the ignorant carping heard recently about the ‘carbon tax’ should be put in perspective with this little factiod: there has been”320 billion tonnes carbon (GtC) emitted since the 18th century, more than 50% the original inventory of the atmosphere.”

The anti-AGW crowd seem to think human emissions aren’t significant, but always forget to mention the timescale of our activity.

And consensus once was that the earth is flat and Columbus was going to sail off the earth – it is all a socialistic conspiracy to transfer wealth from this country to another. Why does this govt profess to love “Ostralians” but do whatever they can to destroy our way of life. And you voted for this – why?

Lorry, You are so funny.

I think we can form a consensus right now that Lorry’s head is flat and he sailed off the edge quite some time ago.