Did 60 Minutes break the law in revealing the girl at the centre of the St Kilda football scandal? Plus, the birds are back at Channel Nine, NT News watch and a whole truckload of tasty media morsels. 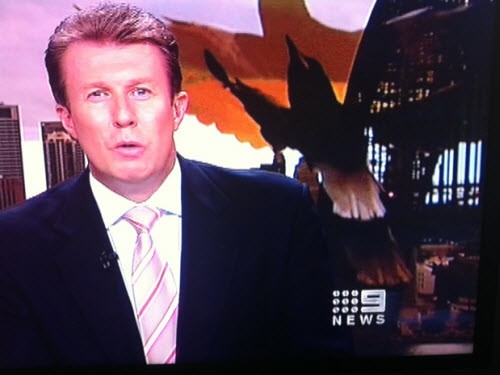 NT News watch #875: We want to lay off the NT News, really we do. But they just keep taking their croc-love to all new levels… 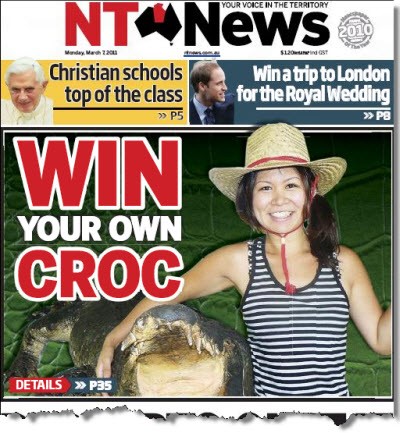 “High on the agenda is a review and ongoing enhancement of the ABC’s Rules and Guidelines governing the definitions and reporting of Average Net Paid Sales.” — ABC Update

With the Mid-East in turmoil, China now tracking foreign journos

“Western journalists have lately been tolerated in China, if grudgingly, but the spread of revolution in the Middle East has prompted the authorities here to adopt a more familiar tack: suddenly, foreign reporters are being tracked and detained in the same manner — though hardly as roughly — as political dissidents.” — The New York Times

“People who regularly follow the news are more likely to be involved in their communities and feel they make a difference, according to a study released by three nonprofits this week.” — The Chronicle of Philanthropy

Why The Financial Times is winning online and in print

“…The Financial Times, the London-based business newspaper, has had considerable success at both of late, in part because it requires regular readers of its Web site to pay.” — The New York Times

“It’s slick, contemporary and feels like something out of the new millennium — sort of New York mag meets GQ, and pretty distinct from Time, with big photo spreads, graphics that pop and draw you into the page, lots of entry points into a story, infographics, sidebars, etc.” — Yahoo! News

“The singer has agreed to pay Dawn Simorangkir $US430,000 ($424,565), plus interest, to settle a lawsuit the designer filed in March 2009 over comments Love made on Twitter and her MySpace blog.” — The Sydney Morning Herald

I thought the story on Sixty minutes about this unfortunate young woman was tacky to say the least. I wasn’t interested in the story, I just felt sorry for her. If anyone needed a caring person to steer her in the right direction she does. I think Liz Hayes let herself down by exploiting this young woman? Why did she do it? The ‘public’ had a right to know? I don’t think so!

IN years to come I’m hoping that this young woman will feel as though she was used – by many people, including 60 Minutes! Shame on them!