Keneally takes the bus for a spin

The NSW election race means the spinners will stop at nothing.

An interesting variation on the underdog theme. When the pollsters say you are down and out then appealing for a sympathy vote might be the best available strategy. The NSW Labor Party clearly thinks so.  How else to explain the supposedly frank comment by ALP state secretary Sam Dastyari that Opposition Leader Barry O’Farrell was definitely going to win the election? It gave Premier Kristina Keneally the opportunity to point out that while some of the blokes might be throwing in the towel, she was still out their campaigning. And then she milked the sympathy vote for all it was worth by having her specially decorated campaign bus stop running and have to be replaced. Those spinners will stop at nothing.

A reluctance to accept political reality. Paul Kelly is the latest pundit to show with his article about belling the cat that they do not want to accept the new reality of Australian politics. The game has changed in a fundamental way that many do not want to accept but will eventually have to —  the Greens are now (or will be from July 1) the holders of the balance of power. For the two major parties there are but two alternatives — deal with the Greens or deal with each other.

The spoiling actions of the Coalition mean that should Labor be defeated at or before the next election they will punish the Coalition in the same way as the Coalition is now trying to punish them. The country will be less governable rather than more governable if the Greens are not included in decision making by whichever team is the government.

Get used to it and learn to live with it.

Plain packaging spreads. Australia led the way and now others are starting to follow. The UK government is expected this week to announce that cigarettes will be sold in plain, unbranded packaging in an attempt to make tobacco less attractive to consumers.

In France, the far-right hits the front. Marine Le Pen, who succeeded her father Jean-Marie in January as leader of the National Front, has shocked the French political establishment by hitting the front in an opinion poll for the 2012 presidential election. Harris Interactive conducted the survey for the Paris-based Le Parisien newspaper and its national stablemate Aujour d’Hui. 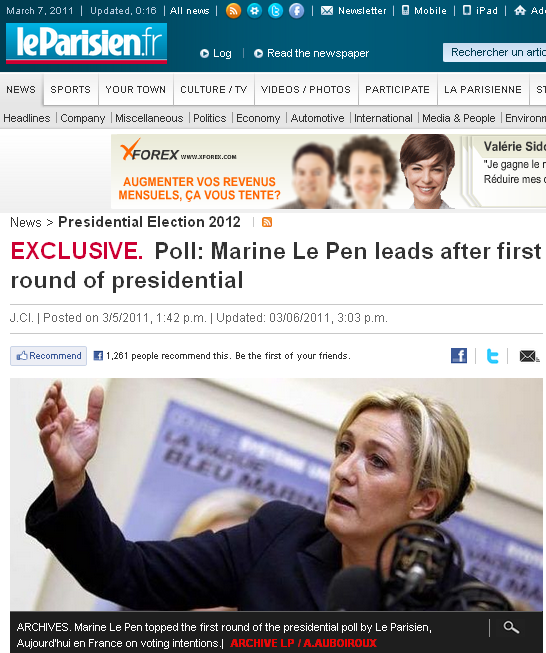 In 2002, Jean-Marie Le Pen achieved second place, not first, in the first round of presidential voting, and his poll ratings were never as high as his daughter’s are now, Schofield notes. 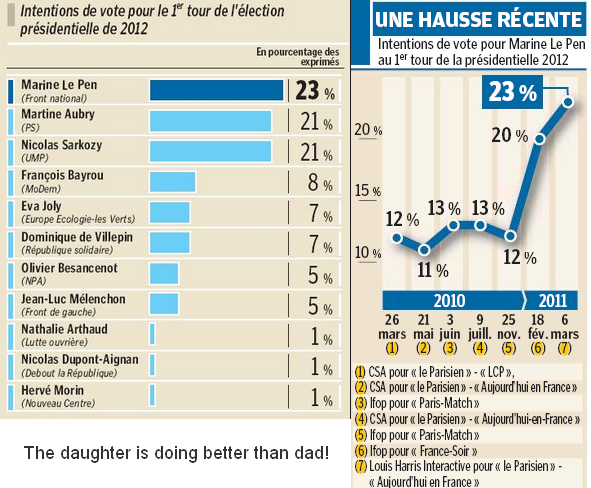 Marine Le Pen, 42 , has proved a canny successor to her father.

Where he was a brash provocateur with a devoted but clearly circumscribed following, her trump card is a kind of woman-on-the-street ordinariness, which potentially has an even wider appeal among working- and middle-class voters, our correspondent says.

She has been at pains to junk some of the more overtly offensive aspects of the National Front’s programme.

She is riding high on the sense of dissatisfaction that is not so much a wave as a permanent condition in France, our correspondent says.

As this poll suggests, there is in the country an entrenched appetite for anti-establishment, curse-on-all-your-houses populism — which the mainstream parties would be most unwise to ignore.

Looking after his friends. Another example has come to light of how Italian Prime Minister Silvio Berlusconi looks after his good friends and acquaintances. Nuri Al Mismari, a former close aide of Colonel Gaddafi’s, in an interview with Arab newspaper Ashaeq Al-Awsat in Paris explained how an unidentified African leader was opposing the election of Gaddafi as leader of the 53-nation African Union in February 2009 but the situation was “resolved with an unorthodox solution.”

“Berlusconi helped resolve the situation and secure Gaddafi’s position by sending in two beautiful escorts to the leader of the African nation in question. This had the desired affect. The leader was convinced and he gave his vote to Gaddafi — and from here is born the expression ‘bunga bunga’ which indicates salacious, adventurous women.”

There are details of other Berlusconi entertaining ways on Crikey’s The Stump website involving a delegation from the Czech Republic.

Quite agree. The Australian celebrates right wing populism but when that doesn’t suit steadfastly ignores the outcome of elections.