We're facing a significant decline in housing construction, but the problem is primarily one of NSW Labor's making.

The execution of the miserable NSW Labor government can’t come soon enough for the residential construction industry. NSW is a vast blight on the national housing data, big enough to drag the whole industry down, particularly given ongoing weakness in Queensland.

The question is whether the O’Farrell government is going to do anything to fix things. Present indications do not look good.

Housing data have been on the slide for a year, since the end of the first home owners’ boost. Just last week the ABS released the latest round of Building Approvals figures, showing continuing declines. The only good news is that the precipitate falls of early last year have given way to a gentler rate of decline. The week before, data on the value of construction work done — a retrospective indicator, if you like, compared to the prospective approvals figures — showed the effect of the first home owners’ boost and the BER, which powered residential and non-residential construction work in 2009 and 2010, falling away.

That was in the aftermath of a COAG meeting where housing, apparently an important issue for COAG in 2010, simply fell of the agenda.

But a closer look at the figures shows that our poor effort at building places for people to live in is highly specific. This is a long-term view of the ABS’s value of construction work data, and specifically the value of residential work, both houses and other dwellings. The actual numbers aren’t important so much as the comparisons between the states. 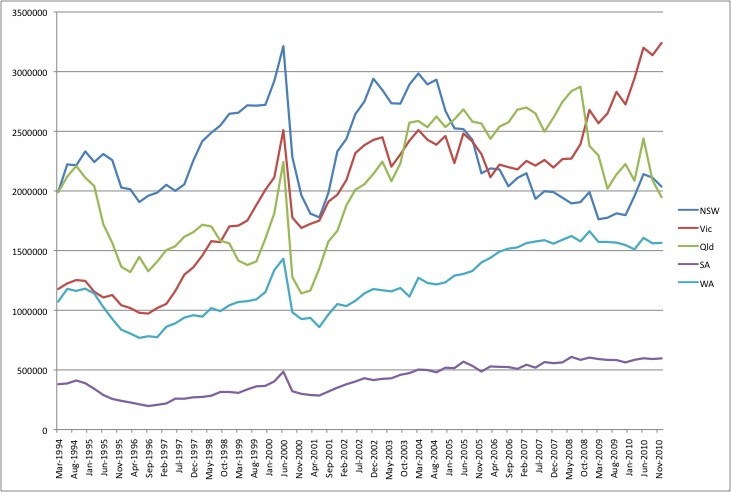 Victoria, South Australia and Western Australia all have long-term upward trends of varying types in how much they’re. So does Queensland until the GFC, after which it plunged. But in NSW, dwelling construction fell off a cliff in 2005 and has never recovered. The irony there of course is that 2005 saw the introduction of the now-infamous Part 3A approval process for projects of state significance, which is blamed for expediting large numbers of inappropriate developments. But there’s no evidence large residential developments benefited from Part 3A.

Having realised there was a major problem in how much housing was being built in NSW, the Keneally government flirted with two big reforms to boost residential development — exempting stamp duty for properties bought “off the plan” and capping local government charges for developers. Under pressure from local councils, the government then backtracked and lifted the cap on greenfields development by 50%.

The provision of infrastructure for new residential development was a key issue to be tackled by COAG. Federal Labor even recognised the issue by committing funding in last year’s election campaign to residential infrastructure in regional centres. As the forum for Commonwealth and state governments and the Local Government Association, COAG should be ideally placed to make progress on resolving who bears the cost of residential infrastructure and how it is planned, rather than leaving in place the current ad hoc arrangement of relying on local government (i.e. ratepayers) and state government programs to bear the burden.

What will Barry O’Farrell do to turn around the multiyear decline in housing construction? Well, it’s not really clear, except that he’ll scrap Part 3A and then “commence an overhaul” of the planning system, which will “remove the politics from planning decisions”. Abolishing Part 3A will merely provide additional regulatory uncertainty for proponents of large projects, because control would be handed back to local councils. And the idea of “removing the politics” from planning decisions, as any developer will tell you, is absurd. Planning regulation is innately political, whether the decision maker is a state government minister or a local council. What’s required is transparency for the process, not the strange notion that an issue that arouses such intense passions in the community can be stripped of politics.

What the NSW Coalition’s plans mean is that, for developers, there’s no certainty in sight, and therefore there’s unlikely to be any turnaround in NSW’s dire housing performance this year.

None of this sort of local detail appears to have bothered The Economist, which produced yet another report last week purporting to demonstrate that Australian house prices were the most over-valued in the world, based on a prices-to-rents formula developed for overseas markets. The Hong Kong-based author airily dismissed any suggestion that high immigration or restrictions on housing development might play any role in Australian house prices, declaring “I must confess that I smile when I read about land scarcity in Australia” and comparing local house prices to those of pre-crash Ireland. As Christopher Joye pointed out to the ABC, The Economist has been getting it wrong on Australian house prices for a decade. What should be getting more media attention than the rantings of The Economist is the continuing decline in housing affordability, one of the issues Labor campaigned strongly on before the 2007 election. Affordability fell further in the December quarter, mainly propelled by the RBA’s interest rate hike. But where was the biggest fall in affordability? Sydney.

That won’t be improving for a long time to come. And it’s not clear our politicians understand how big the problem is.

One of the key reasons for limited housing starts in NSW is that the Government has consistently refused to fund infrastructure necessary for housing development to start.

Withour electricity, roads, sewage and such, housing’s not much of a starter.

The Government will graciously allow private developers to develop these facilites, as long as the private sector pays for it all themselves. They then must hand over ownership of such facilities to the state once completed.

Funny, I thought that was what the various taxes, duties and rates we all pay when buying and owning property are for.

O’Farrell’s people only have to be competant to look like saviours after the current mob of no hopers.

Bernard, I like a lot of your articles but this buying into the myth of the housing shortage is dissappointing. I think the question about the shortage is “what signal would you look for to show a return to the ‘correct’ number of houses?”. You final comments suggest that it would be a lowering of prices – so we need to build enough houses for the market to clear. That makes no sense if people will always buy houses because they believe prices will always go up. Which makes them go up until, as they have found out in more than a few places, they don’t. That game can only continue while there is a source of credit for people to buy ever more houses and so the answer is standards on bank capital reserves, interest rates, reduced consumer debt or just plain sanity. All of which will come regardless of land release, because housing is a purely ‘economic’ shortage not a shortage of housing capacity.

An entirely novel suggestion, would be to equate the sufficiency of houses with the number of people actually needing to be housed. Under that scheme, the number of persons per dwelling has not radically increased. There are not hoardes of people homeless for lack of a home (as opposed to mental illness, poverty, drug abuse etc). The number of houses fits pretty well with the number of warm bodies and therefore there is no major shortage in the capacity to house people.

Even when all the investors in the current mania go bust, there will no shortage in housing capacity.

You and Christopher Joye believe the Economist is wrong in saying house prices in Australia are overvalued. You then refer to the continuing decline in housing affordability. Given that by far the largest cost in buying a house is in fact the price of the house, doesn’t that suggest that the Economist might in fact be right?

And how expensive will housing be if j-U-LIAR gets her carbon tax. I guess tents are alway a carbon efficient alternative.

Lorry, since you are quoting standard Lib PR I assume you think the carbon tax will raise the price of goods in general. That being so it will lower prices on houses because people won’t be able to service as high a debt. A drop in prices of other goods might show up in higher house prices, just the same way a drop in interest rates does.