The climate's changing rapidly. And we're not talking about cO2 levels.

In May last year Possum Comitatus featured the annual Lowy Poll. The poll set of global warming questions the Lowy Institute asked — and in some instances, has asked over several years — was most illuminating in terms of tracking public opinion on this issue over the past five years.

There is a controversy over what the countries of the world, including Australia, should do about the problem of global warming. I’m going to read you three statements. Please tell me which statement comes closest to your own point of view.

Take a look at how the opinion has shifted. 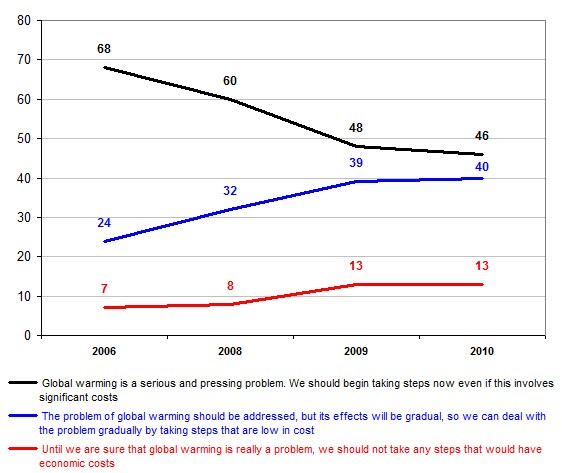 This graph dovetails nicely with today’s set of Essential questions.

In relation to the Opposition’s line on the government’s “backflip” on a promise Prime Minister Gillard made before the 2010 election not to introduce a carbon tax in the next term of parliament, respondents were given a set of statements and asked which was closest to their view.

Fifty nine per cent of respondents picked this line:

The Prime Minister has broken an election promise and should wait until after the next election before introducing a carbon pollution tax.

The climate’s changing rapidly. And we’re not talking about cO2 levels.

This is so depressing and totally the opposite of what the latest (2010) science is telling us, again and again.

wonder what the polling was in tasmania ( would benefit on balance with a bit of warming) and conversely in north qld.

The power of the press and the gutlessness of the ALP, and the ABC. Well done Rupert, well done coal billionaires, well done, I am sure that your money will protect you from the consequences of your actions, not so sure about my grandchildren though.

Michael – I think you have been sniffing too many carbon emissions.

Even if you assume everything that the church of global warming is preaching is true, removal of total carbon emissions from Australia would have no measurable effect on global Co2 levels.

Your religious beliefs will make no difference to your grandchildren… unless you reduce their inheritenace by donating to j-U-LIAR’s carbon tax.

I’m alright Jack and the grand children can take care of all our stuff ups, eh?
They are probably much smarter than their elders,and that’s not too hard.