The period for estimating climate is usually 30 years or more, long enough to sample a full range of weather.

Weather variables such as temperature and rainfall fluctuate naturally (see Box 1). These changes in weather from day to day, between
seasons, and from one year to the next, do not represent climate changes. The period for estimating climate is usually 30 years or more,
long enough to sample a full range of weather.

Identifying climate change that is truly global in extent requires simultaneous observations from a network of locations around the world (see Question 3). Such a network of instrumental observations has only been available since the second half of the 19th century. Climate changes that occurred before this time can be identified by reconstructing records from climate-sensitive indicators like ocean sediments, ice-cores,
tree rings and coral reefs.

Greenhouse gases play an important role in determining climate and causing climate change Greenhouse gases include water vapour, carbon dioxide (CO2), methane, nitrous oxide and some industrial gases such as chlorofluorocarbons (CFCs). These gases act like an insulating blanket, keeping the Earth’s surface warmer than it would be if they were not present in the atmosphere.

Except for water vapour, the atmospheric concentrations of all of these gases are being directly influenced by human activities (see Question
4). Once released into the atmosphere, many of these gases remain there for a long time: in particular, a significant fraction of CO2 emissions remains in the climate system for hundreds to thousands of years. 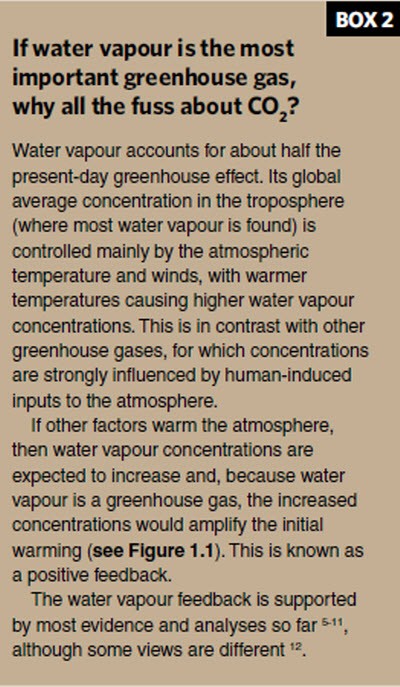 Water vapour therefore reacts to, and amplifies, climate change caused by other factors (see Box 2 and Figure 1.1). The effects of changing greenhouse gas levels on climate can be distinguished from the effects of other factors such as changes to the Sun’s radiation. These different causes lead to different patterns or “fingerprints” in the resulting climate changes, which assist in identifying the cause of observed changes.

For example, increases in solar radiation would be expected to warm both the upper and lower parts of the atmosphere and result in days warming more than nights. On the other hand, increases in greenhouse gases would be expected to result in a cooling, not a warming, in the stratosphere (the layer of the atmosphere above 15 km elevation), and cause nights to warm more than days. The observed patterns of change
more nearly match those expected from increasing greenhouse gases. 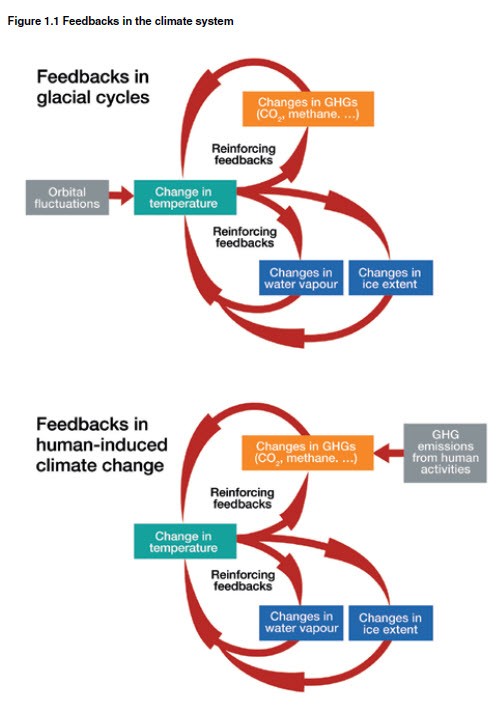 There are close connections between global temperature, atmospheric water vapour, the extent of polar ice caps and levels of greenhouse gases (GHGs) in the atmosphere. When one of these is disturbed, the others react through processes that amplify the original disturbance until
a new, different climate equilibrium is reached.

In the glacial cycles over the past million years, the disturbance came from fluctuations in the Earth’s orbit around the Sun (grey box in upper diagram). This caused temperatures to change (green box), in turn inducing rapid changes in water vapour (left blue box), and much slower
changes in ice caps (right blue box) and greenhouse gas levels (orange box), which together amplified the temperature change.

In modern climate change, the disturbance comes from human-induced changes in atmospheric CO2 and other greenhouse gas levels (grey box in lower diagram). In both cases, the disturbance is amplified by similar reinforcing processes.

The troublesome decline of science education

Water vapour eventually falls from the sky of it’s own accord….. GHGasses may remain up there indefinately.

“Water vapor is about half the present-day greenhouse effect”

Even if you buy into the standard view that back-radiation is powerfully important, the above statement is an outrageous lie. Just incredible. I’d not expect this sort of rubbish from the most repulsive liars of Goddard or realclimate. What a far out statement. You see this constant lying isn’t going to stop until we start sacking people. This lie is second only to the USGS lie about volcanic CO2 emissions.

Here’s the absorption-scattering spectrum just to take a look at things. And whereas the other alleged greenhouse gases are trace gases, water vapor is up at 1%. So there is the CO2 and its puny in three respects.

1. There is so little of it. Barely enough for the plants to grow. No more than 390ppm if the compulsive liars monopolizing the measuring of it are to be believed. And of course you need 10 000 ppm just to get to 1%

2. As you will see the regions of infra-red wavelengths that CO2 absorbs are tiny. Or skinny if you look at the graph.

3. These regions, at most places and temperatures are usually pretty much saturated already by water vapor.

So make no mistake about it. The report kicks off with a known and transparent lie. They get away with lying so much they must now be feeling deeply confident about it.

“Water vapour eventually falls from the sky of it’s own accord….. GHGasses may remain up there indefinately.”

Indefinitely? You cannot let these people stooge you fella. There’s a carbon cycle just like there is a water cycle. How is your comment relevant? Are you hoping that the extra CO2 will help us a little bit when the air is too cold to hold water vapor?