A NSW Labor MP locked in one of the state election's closest contests has bagged his party's record on planning, privatisation, climate change, and law and order.

A NSW Labor MP locked in one of the state election’s closest contests has bagged his party’s record on planning, privatisation, climate change, and law and order.

Paul Pearce, Labor MP for Coogee since 2003, says NSW Labor has been overly dominated by right-wing machine men whose ideology is alien to the party’s core values.

In a mail-out to constituents, the self-described “unreconstructed old lefty” echoes Liberal Party policy by calling for a complete review of the state’s controversial planning laws.

He told Crikey that Part 3A of the planning act — which allows the government to override council decisions on major projects — is “fundamentally flawed” and “completely discredited”.

“It is worded in a manner that allows private developers to exploit it,” he said. “It effectively allows it to be abused if a developer so intends and a number of major developers are frankly doing that.”

“The public, partly through The Greens and partly through some bloody awful decisions, has decided that Part 3A is unacceptable. Essentially, Part 3A is a mechanism that is discredited in the public mind and as such it ought to, in my opinion, be reviewed and, I suspect, repealed.”

He said the state government had left the public feeling disenfranchised by overriding local councils.

Only last December, when a proposal to expand the Coogee Bay Hotel was rejected, Pearce said described Part 3A as a “rigorous” assessment process.

Now he says: “If you have a planning mechanism and accompanying regulation that allows a [hotel] to be considered a state-significant project then the document itself is fundamentally flawed.”

Pearce said he has been a vocal critic of Part 3A in caucus since it was introduced in 2005. He stands by all his past statements.

The former Waverley Council Lord Mayor, who opposed Labor’s privatisation of electricity assets, said he hopes the infamous right-wing machine men of Sussex Street will have less influence after the March 26 election.

“If there is a substantial defeat I think the federal branch will have to have a close look at how NSW Labor has been managed.”

He said the members of the Terrigals faction, which includes Eddie Obeid and Joe Tripodi, “have got an ideology quite alien to a Laborist or social democratic party”.

He said the public had not warmed to the NSW Labor’s image of “cold managerialism”.

The Bronte local is facing a tough battle for reelection, with ABC psephologist Antony Green speculating he could even finish third behind the Liberal Party and The Greens. Labor has not lost Coogee since 1974.

Pearce is hoping that Barry O’Farrell’s outspoken opposition to a carbon tax, designed to appeal to aspirational voters in the western suburbs, will backfire in his seaside electorate where environmental values are strong.

Liberal candidate Bruce Notley-Smith, a local lord mayor, said he could not speak to Crikey unless the request was cleared with head office first. Crikey asked Liberal HQ for permission yesterday but has yet to receive a reply.

In the meantime, Notley-Smith has landed an endorsement from none other than former Underbelly star Roy Billing: 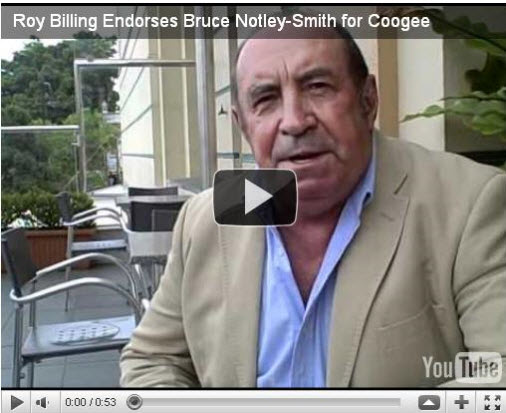 The Liberal Party have been campaigning hard to win the affluent seat. Last week, in one of his major policy announcements of the campaign so far, Barry O’Farrell promised a feasibility study into expanding Sydney light rail network eastward into the Coogee electorate.

Greens candidate Sue Doran said: “A lot of people say to me, ‘Paul is a lovely guy but what Labor has done is unforgivable’.”

“If you’re in a party you’ve got to have influence.”

It’s not well known that Paul Pearce helped me and few other players close the dioxin spewing Waterloo incinerator, which removal paved the way for the urban renewal plan at Green Square between the city and seat of Coogee. Not overtly, but his influence was real. It also prefaced his promotion into the mayoralty. And he is favourable to forest protection which I like.

I haven’t got the time or inclination to go into the details here, but as a former candidate for the Greens in neighbouring Vaucluse in 1995 with a 10% vote, and then councillor at Waverley with Pearce for 4 years to 1999, name on the waverley library etc, I know a bit about that time of nsw political history.

Don’t get me wrong, he does a good line in sharp toothed fangs of the left too including at the expense of the Greens. Or perhaps more the duchessing strategy in the last 10 years. But I suppose it all goes in the mix.

Oh, and I suppose, next time you go down to Bondi and wonder why there are no sky scrapers on the beach front – Pearce shares a fair degree of credit for that, for real.

Lastly, when you wander over that green turf above the strand of white sand. Imagine a big grey concrete heavy rail station just where that cute english back packer in a bikini is sunning herself. With a sky scraper over the airspace rights like Bondi Junction. Pearce again. For real.

Paul Pearce has his signs up everywhere. Next to President Bob Browns signs, many of which were still there from the 2010 election. Not very Green President Brown, leaving your ugly signs up. I suppose as President you have an exemption from being Green.

In the Illawarra, we’ve had recent experience of the Part 3A of the Planning Act. Permission has recently been given to a developer to build several thousand homes at Calderwood – a recognised flood plain. There’s lots of public dissent, again ignored by the NSW Keneally Govt (surprise surprise!) – no environmental investigations, no submissions by the public, no community meetings – nothing! It will be interesting to watch the expose of election funding after March 26. We’ll probably have to rely on The Greens to disclose these facts, just as they did re the Killalea proposal! It was interesting to see the hard work of the Green’s member – it’s probably still available on the net – Sylvia Hale – what a champion!

The two major parties are just two sides of the same coin – not voting for either of them!(sell out to developers, cigarette companies and corporate NSW and Australia wide).

Regardless of one’s stance, it is good to see some inner reflection and self-awareness within any major party in this country. Only way to get back on track is via change from within.