No signs yesterday of parliamentary reform

Attempts by members of the cross bench at the start of this parliament to make question time in the House of Representatives a meaningful part of parliamentary democracy have clearly failed.

No signs yesterday of reform. Attempts by members of the cross bench at the start of this parliament to make question time in the House of Representatives a meaningful part of parliamentary democracy have clearly failed. I made the mistake of listening yesterday and learned nothing except that “order!” is now the most used word.

The Speaker Harry Jenkins must have used it every second minute as debating points posed as opposition questions and government ministers avoided the subject raised anyway. Goodness knows what the delegations of visiting politicians from Indonesia and Bougainville who were present thought of it all.

That our democracy is like a school room where the teacher has absolutely no control I expect.

Libya hardly a top of mind issue. There was one part of the latest NBC News/Wall Street Journal Survey published overnight that particularly intrigued me given the prominence that the US media, like our 0wn, is giving to the conflicts in the Middle East and North Africa.

People were asked to rank a range of issues that they thought their government should address. And how did Egypt, Libya, and the political unrest in Arab countries rate? Well one per cent of Americans had it as a first priority issue. 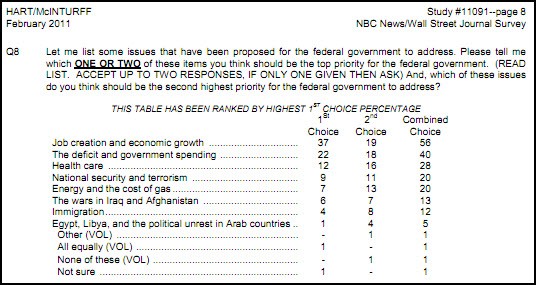 A glance this morning at the most read stories on Australian newspaper websites suggests that the interest would not be much different here. The only appearance is at number five on the Sydney Morning Herald list. 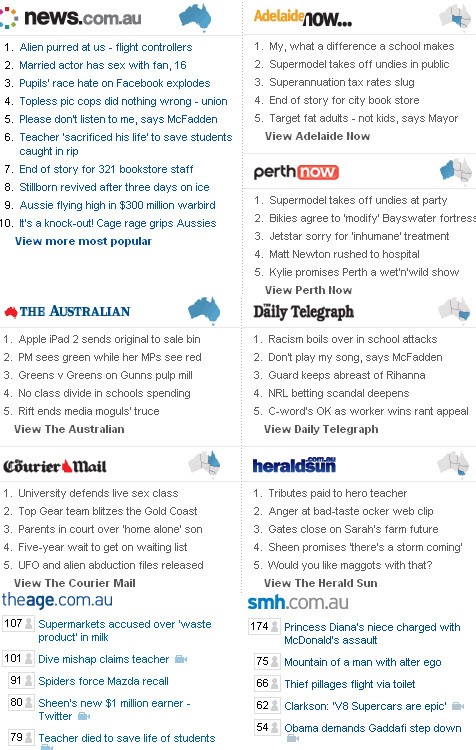 And, I note, Australian politics does not get much of a look in on the popularity ratings either. Perhaps I should follow Peter Costello’s example and write more about football!

A nice little scandal to start the season. So here I go then. Back to my early journalism days of writing “footy topics” for Tasmanian and Melbourne Truth. 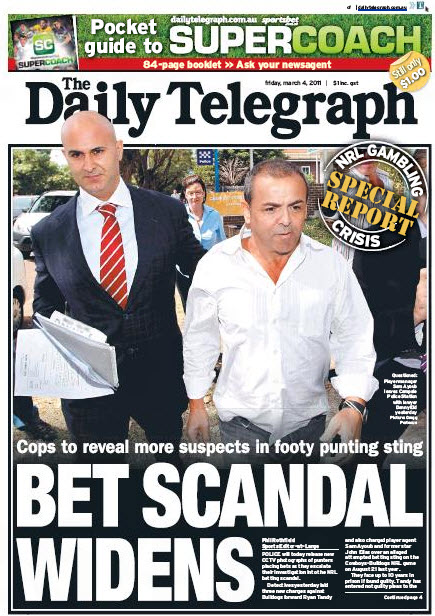 What better way could there be than this morning’s Sydney Tele to usher in a new rugby league season!

It should, however, be a wake up call to sporting administrators of all kinds. It is one thing to cop the sponsorship dollars increasingly provided by bookmaking firms but they must adopt the same kind of controls as racing to control the inevitable rorts that naturally go with gambling. And that not only means more investigations like the NSW police have carried out on this occasion but an insistence that clubs start providing the fans with accurate and reliable information on such things as injuries to players.

Even in the United States where sports betting is illegal outside of Nevada but illegal wagering is a giant billion dollar industry, bodies like the NFL, college football and the NBA have strict rules to try and stop insider trading. Experience has taught them that public suspicion that predicting the result of a game is not fair for everyone turns people off being interested in a sport.

Disclosure of interest: I once was chairman of an ASX listed sports bookmaking  company but these days I prefer to have a bet on dictators.

If it’s good enough for news.com.au … That fine measurer of public taste, news.com.au, reveals today that its readers want more of our pollies to follow the example of SA Liberal Senator Mary Jo Fisher and bust out a move in parliament.

Personally I am more in favour of politicians following the example of British Conservative MP Graham Evans and silently brightening up parliamentary telecasts by playing air guitar. Judge for yourself on The Stump.

Ethics of the Murdoch press. Fresh allegations have been made — and denied — about the use of illegal phone taps by Murdoch owned newspapers in the UK.

From yesterday’s House of Lords Hansard:

Lord Prescott: My Lords, this Statement, frankly, is largely about the price of shares and ownership of BSkyB, and little to do with democracy in our society. Is the Minister aware that the investigation into the Murdoch press on phone hacking has now been extended to the Sunday Times. The argument that it was simply one paper and one rogue reporter is no longer true — a number of papers owned by the Murdoch press and a number of their employees have been involved in withholding evidence and illegal practices. Is she happy to extend a major part of our television services to the Murdoch press? Will she consider extending the consultation period until the criminal inquiries have been completed?

Baroness Rawlings: The noble Lord, Lord Prescott, brought this up in our debate on my noble friend Lord Fowler’s Question the other day. He raises a very serious point about the hacking, but I cannot address that at this moment in the debate.

From yesterday’s House of Commons Hansard:

Mr Tom Watson (West Bromwich East) (Lab): The Government could have asked Ofcom to report on News International’s commitment to broadcasting standards. I now believe that evidence exists showing that journalists currently employed on The Times and The Sunday Times were involved in phone hacking, and that damaging revelations were printed in The Sun from information possibly collected by illegal hacking. We are told that the BBC has been bullied into delaying the broadcast of an edition of Panorama showing more sinister forms of illegal surveillance. If the Metropolitan police show the Secretary of State that evidence, will he change his mind?

Mr Hunt: First, the issue of phone hacking is extremely serious and very important, and someone has been sent to prison for it, but there is a judicial process and it is not appropriate for me to involve myself in it. As to whether I can ask Ofcom to examine those issues, my understanding is that legally, I am not able to do that at this stage.

The Guardian reports that News International vigorously denied that any of its titles apart from the NoW were under investigation.

“We do not believe Tom Watson has any evidence to support his allegation,” a spokesman for the company said.

“It is not a coincidence that he has made such cowardly and unsubstantiated claims under the cloak of parliamentary privilege. If he has any evidence we urge him to send it to us and we will take immediate action.”

I found it curious that the BBC bumped Libya for Murdoch news. I guess its a fight in their neighbourhood though.

I don’t think you can blame the yanks for preferencing those issues. They are not having a great time of it and things like jobs, health all need real action for them. That and of course Glen Beck doesn’t have much to say on Libya.

It’s not fair to judge Australians’ interest in the Middle East by Newscorp or Fairfax’s “Top 5 most read”. If you were interested in the protests, would you trust either network to give a comprehensive view of the conflicts? Blow that for a game of soldiers.

If I want to get the latest news on Libya or Bahrain, I’d head over to The Guardian or Al Jazeera. Both have live blogs, and have far better coverage in general.