Bean Media, publishers of the influential business publication, The CEO Magazine, have today refused to confirm reports that The CEO Magazine will be conducting an exclusive interview with Australian businessman, James Packer.

The CEO Magazine is a bi-monthly title that provides its readers with a wealth of articles discussing business strategy, expert opinion, analysis, corporate case studies, emerging trends, leadership, growth opportunities and challenges facing our country’s leading business leaders. The CEO Magazine explores how Australian businesses can improve the way they manage their operations, staff, technology and supply chains with a view to creating a more profitable and successful business.

Whilst The CEO Magazine is extremely meticulous in selection for interviews within the title, rumours of a one-on-one interview with James Packer have surfaced this week.

“Due to the high profile nature of The CEO Magazine, it is impossible for us to confirm who will be included in upcoming magazines until publication date. Content is kept strictly between the publisher and any leading senior executive that have been chosen for selection”, said a spokesperson for publisher, Bean Media Group.

The next issue of The CEO Magazine is due out next month.

Story of the week. Northern Territory News produced a jaffa this morning about the talking cat who was abducted by aliens… 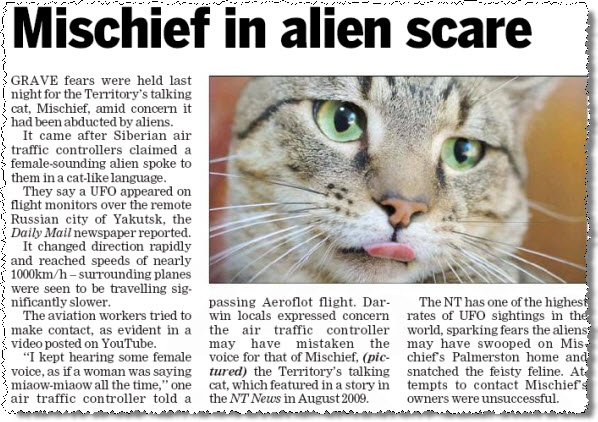 A lesson in headline writing #78. NY Post, we’re not worthy… 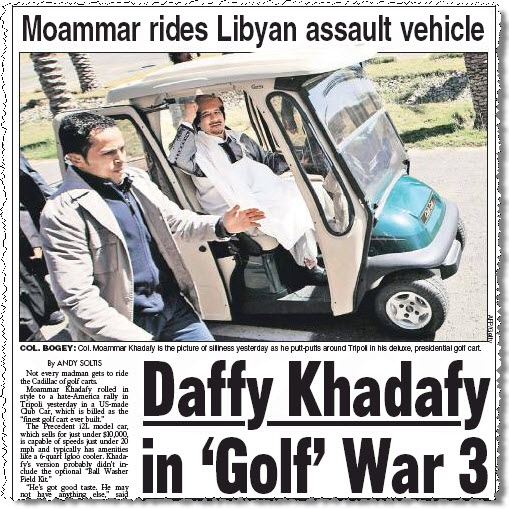 How to conduct an interview, Fox style… As Wonkette notes, “This is not how a Fox interview is supposed to be conducted! You are supposed to just let them slip in stuff like this as if it’s fact!”: 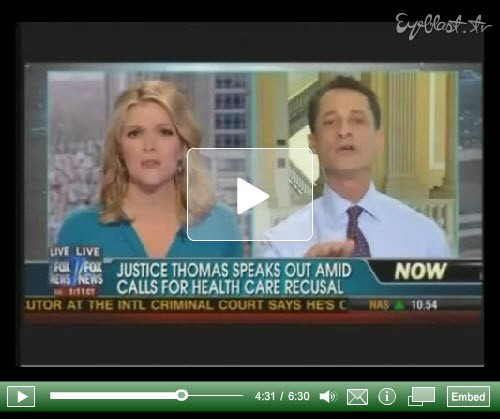 “Jeremy Hunt, the UK culture secretary, has given the green light for News Corporation to prepare an £8bn bid for the 61% of BSkyB it does not already own , setting up a showdown with investors in the satellite broadcaster who are determined to seek a deal worth at least £1bn more.” — The Guardian

How the John Edwards affair ended pp in the Enquirer.

“Ever wonder exactly who “the friend” is dishing the dirt on celebrities? Well, in the case of the Rielle Hunter-John Edwards scandal, we know exactly who it was: the memorably-named Pigeon O’Brien. And now, she’s explaining why, exactly, she went to the Enquirer, broke their affair, and effectively ended his political career.” — Jezebel

“Charlie Sheen may or may not be “winning,” in life, but he has won a rare honor: the “Fastest Time to Reach 1 Million Followers” Guinness World Record.” — Mashable

“A new report commissioned by the campaigning group Women in Journalism claims 74% of news journalists on national newspapers are men, whilst women make up just one third of journalists covering business and politics and just 3% of sports journalists are women.” — Jon Slattery

Why did China block and then unblock LinkedIn?

“China’s internet censorship policy, known as China’s great firewall (GFW) played an important role in the headlines last week due to the fact that GFW blocked and then, a couple of days later, unblocked business social network LinkedIn.” — Social Times

Why the iPad won’t suffer the same fate as the Mac.

“If you’re an Apple fanatic, you know this song by heart. Apple gets out ahead with a breakthrough product, like the Mac. And then it loses its dominance as competitors knock off its software and distribute it to a pack of fast-moving hardware specialists. It happened in personal computers twenty years ago, something eerily similar is happening right now with smart phones. Will it happen in the tablet market?” — Forbes

White powder scare in the US at ABC News.

“A suspicious pile of white powder discovered on a desk at ABC News in New York turned out to be instant soup left on the desk by an overnight employee.” — Mediabistro

1. Instant soup made my day, thank you.

2. Fox/Wonkette: Is this guy running? Cos I’m voting for him. This clip should be compulsory media training for all MPs. THIS is how its done, people.

It’s Fox. And as we all know Fox f.ucks!

What a ridiculous story about an abducted cat! JUST ONE BLOODY CAT FFS?

When they ALL get abducted I won’t be able to comment. I’ll be blind stinking drunk under the damn table after bingeing on Champagne.

“When they ALL get abducted I won’t be able to comment. I’ll be blind stinking drunk under the damn table after bingeing on Champagne.”

Elan, whatever unforeseen thing that may occur on these boards between us in future – a tiff, a blew, a barney – you are a goddamn gem and I wish you nothing but glad tidings – and a case of France’s finest bubbles.

…………..just quietly sneaking in here…I know folk like their little Tiddles…….I refer only to those ‘tiddles’ who are allowed to free roam:- night or day!

To have these abducted MLF I would be perfectly happy to binge on any booze. I would first strain the toenails out through an old pair of panty hose and then knock it back.

(Bubbas Booze Barn currently has such on offer 45c-bring your own bucket).

If Weiner is the future of American politics then God help the USA, this obnoxious clown is a condescending, troll whose insane antics have been well documented before. This man had no repect for Kelly, if he was being interviewed by a man he would not have got away with it, he was contemptible of Kelly and he gave no doubt at all he believes she is just a good looking bimbo and he was going to drive home his point and put this blonde bimbo in her place. All he succeeded in doing was showing just how insane he really is. What a grubby little man.