Dear Labor MPs: remember, we don’t have a majority government

Don’t let the majority rule. Just as there are many in the Liberal and National parties having difficulty accepting that they did not win the last election, there are a fair number of Labor Party MPs who don’t understand that their lot are not in control of the Parliament either. Greens senator Christine Milne put it […]

Don’t let the majority rule. Just as there are many in the Liberal and National parties having difficulty accepting that they did not win the last election, there are a fair number of Labor Party MPs who don’t understand that their lot are not in control of the Parliament either. Greens senator Christine Milne put it succinctly this morning. It was taking a while, she said, for people to realise Australia didn’t have a majority government.”They don’t have control of either house on their own and it requires everyone on all sides of politics — the coalition as well as the government as well as the crossbenches — to get together and work things out,” she told reporters in Canberra.

Underlying the current kerfuffle about Labor MPs being unhappy at the influence of Bob Brown and his Greens, of course,  is nothing more than the undemocratic tendencies of the NSW right wing of the party. The last thing these people want is to allow parliament to vote on anything where they might not be in the majority.

Telling lies the Murdoch way. And to think that the British government is on the verge of giving a Rupert Murdoch corporation unfettered control of that nation’s BSkyB pay television network! To go with the evidence of the lack of ethical standards at News Corp provided by the illegal phone tapping by the News of the World we now have this example from Murdoch’s Fox News in the United States, courtesy of digby at the Hullabaloo website: 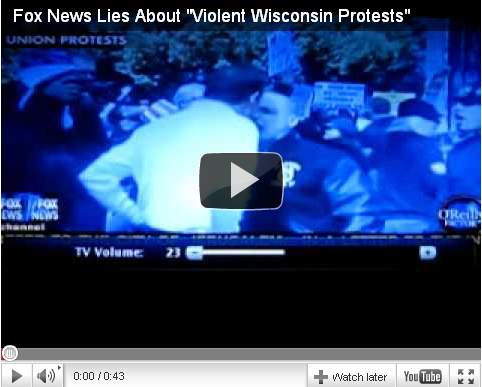 Notice in the pictures accompanying that little chat about trade union demonstrations in Wisconsin the summery look of the palm trees in the background and the open neck shirts. In Wisconsin at the moment temperatures have been below zero. The vision is not from Wisconsin at all but from a “solidarity” demonstration in Sacramento.

Photo opportunity of the week. Tony Abbott has been trying hard to give the television networks a picture to accompany his daily new big tax campaign but the fruit shops of Canberra pale into insignificance compared with the effort of Canada’s Treasury Board President Stockwell Day. To announce that the Harper Conservatives plan to spend $10 billion less in the coming year than they did in 2010-11 — the first time in a decade any Canadian government has planned to reduce expenditure — Mr Day chose an Ottawa fitness club called Lean and Fit.

It was apparently, wrote a columnist in The National Post, “an attempt to persuade us that this is a government with six-pack abs and no fat left to trim. … But however beautiful the strategy, it’s worth looking at the results — and in this case, they don’t live up to the spin.”

The best of good things sometimes get beaten. Overnight over £8 million was traded on Betfair at 1.04 or shorter that England would beat Ireland in their World Cup cricket contest. Almost £5 million was invested at 1.02 or shorter with £2.7m matched at 1.01. 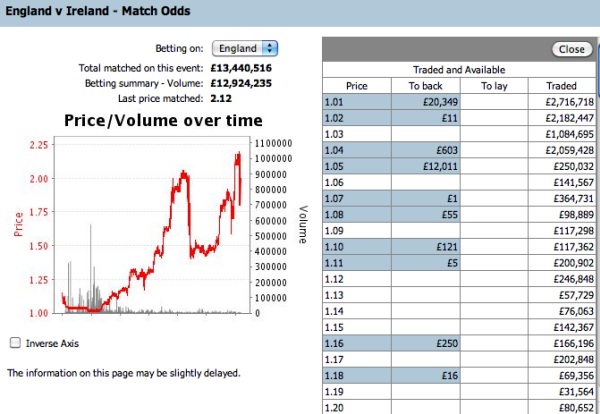 Just a little salutary reminder to all we punters that there is no such thing as a certainty.

And for any readers who fancy the chances of more Middle East dictators being rolled, there is a set of Crikey Indicators on The Stump website with the probability of Colonel Gadaffi being gone by 31 December put at 78%.

Irish worries continue. With its election out of the way, a new Irish government will have to tackle the problem of keeping the country solvent. And the indicators are that it will be a difficult task. The yield on the country’s 10 year bonds is now back at a record high point. 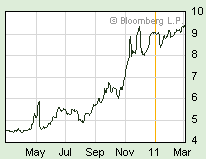 Once upon a time an opposition party’s national conference would get media attention. What happened?

“Unfettered” isn’t that the same as “fetid”?

“..the last thing these people want is to vote on something where they might not be in the majority.”

I carry no brief for NSW Labor,for, as a Sydney resident, I’m looking forward to waving good bye to Premier Kennealy , but I suspect what worries Labor federally is precisely that the Greens are exercising an influence on the Gillard government disproportionate to their community support.
As one wag wrote in a ‘Letter’ to a major broadsheet ” how can anyone accuse Gillard of breaking her promise, that there would no carbon tax introduced by any government she led, when the current government is led by Senator Brown.”
If Labor goes to the polls with that perception widely held, and it is clearly gaining currency, it’s “goodnight folks”, and these ‘hard Labor men’ know it.
What do you think Hawke was chatting to Simon Crean about recently, when caught on camera, enjoying a cigar?
It wasn’t about how well Julia is travelling!