The changes continue at the embattled Ten Network. James Packer has quit as a director immediately, the board has raided the Seven Network for its CEO. Plus, other media tidbits from around the globe.

Packer gone, and Warburton from Seven to Ten. The changes continue at the embattled Ten Network. James Packer has quit as a director immediately, the board has raided the Seven Network for its CEO (Seven’s sales boss James Warburton) and the long-time chief financial officer John Kelly is going. Warburton will replace acting CEO Lachlan Murdoch, who was asked to fill the role by the company’s board after it removed Grant Blackley 10 days ago.

There was no explanation for the Packer departure. But questions will be asked about whether the board overruled objections he may have had to the appointment of Warburton. The announcement simply read: “Ten Network Holdings Limited today announced the resignation of James Packer as a director of the Company, effective immediately.”

Warburton has been a frustrated CEO in the wings at Seven, but has been unable to find a way of moving past David Leckie, Seven’s successful CEO and former Nine boss. Leckie was named CEO of the about-to-be-created Seven West Media (formed by the sale of Seven Media Group to West Australian Newspapers in a deal orchestrated by Kerry Stokes). Warburton had the sales chief gig as well as heading up digital, but there have been reports he wanted the CEO’s role.

Ten said Warburton will commence as CEO on July 14 and will also join the Ten Holdings board. With Kelly gone (to be replaced Paul Anderson, currently CFO of the Television division) that completes the clean out at the top of the company. Still left from the old management group are head of sport David White, news chief Jim Carroll and the most important man in the business, chief programmer David Mott. — Glenn Dyer

Murdoch: I’m proud to go green. News Corporation says it is now the first major entertainment company in the world to become carbon neutral across its global operations, thanks to environmental and energy initiatives — and purchasing carbon offsets. Rupert Murdoch announced the move to his troops in an email… 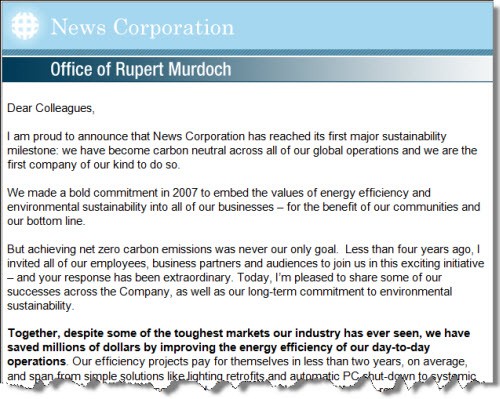 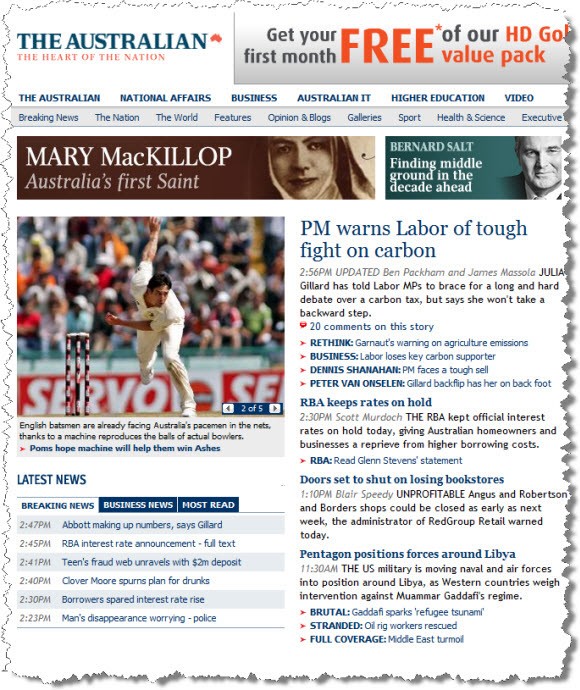 Alongside the latest up-to-date wire yarn (about the government’s planned carbon price) was a four-month old feature section about the canonisation of Mary Mackillop, as well as links to stories about herbal toothpaste, the death of Penthouse founder Bob Guccione and England’s preparation for the Ashes — all from October 21 last year. — Tom Cowie

The Age ‘rauncy’ fail. From The Age website today: 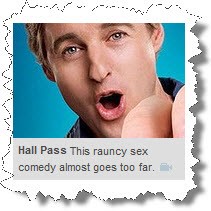 WikiLeaks is up for a Nobel Peace prize

“WikiLeaks is among the 241 Nobel Peace Prize nominees this year. The nominees come from 53 organizations and are greater in number than in any previous year.” — Mashable

“News Corp has been talking progress for several days, and various people are trying to lead journalists to the notion that the company has offered up a structural rather than behavioural solution to solve the plurality problem caused by having the Sun, the Times and Sky News all in the one basket.” — The Guardian

“A fund run by JP Morgan & Chase is in talks with Twitter to take a minority stake in the rapidly growing microblogging company, people familiar with the matter said. The investment, which is expected to value Twitter at more than $US4 billion ($3.9bn), will be made from the bank’s new $US1.2bn digital growth fund, these people said. Exact terms of the potential deal couldn’t be learned. Discussions between JP Morgan and Twitter are continuing, and there is no guarantee a deal will be struck, the people added.” — The Australian

“The owners of Australian pay-TV operator Foxtel, including media group News Corp and phone company Telstra , have agreed in principle to back a $2 billion bid for rival pay-TV firm Austar , a newspaper said on Wednesday.” — Reuters

Bloomberg testing the world of opinion

“After conquering Wall Street in the 1970s, crushing competitors in the information-technology industry in the ’80s and reigning over New York City politics for the past decade, the ever-ambitiousNew York Mayor Michael R. Bloomberg now wants to dominate a new sphere — the world of opinion. — The New York Times

Why is the Nobel Prize for Literature cancelled?

How very Packeresque. Join a board, sack the Chairman to settle a hatefest score, then resign. Chip off the old block, indeed.

News Ltd have a competition for staff to show why they’re carbon neutral. Wow, it’s a one $500 dollar prize ( voucher).

Can’t wait to see what they come up with. Lots of spin.

If Rupert really is so happy to have morphed into Kermit (and it’s not just more PR hot air) – why hasn’t he told his Limited News Party (“Noddy” Hunt and “Big Ears”) to get of their logs and get cracking, rather than croaking about “The Gillies are coming, with all their great big new taxes and price hikes” – when that happens I’ll believe it. When his empire takes on Abbott and their party – and their “miner” sponsors. That would be “practical” action.

Murdoch claiming carbon neutral is just keeping up with the Jones’s – when having cocktails with other billionaires, who wants to feel like a cad? Meanwhile his fear-mongering employees and their viewer botnet keep the planetfu%&ing corpocracy in control. We’re so screwed.