A disheartening lesson for political journalists. Former Liberal Treasurer and now very readable newspaper columnist Peter Costello is learning an important lesson about journalism — the mob are more interested in football than politics.

A fortnight ago the Costello column created the kind of controversy his normal offerings on government and the economy do not when he wrote that “any right-thinking parent would quake with fear to hear that footballers were coming to their daughter’s school to give a little bit of inspiration.”

The comments came think and fast, attracting a readership that must have delighted his editor at The Age. This morning, showing the wisdom of an experienced writer who knows that when you are on a good thing you should stick with it, he has returned to the footballer theme. 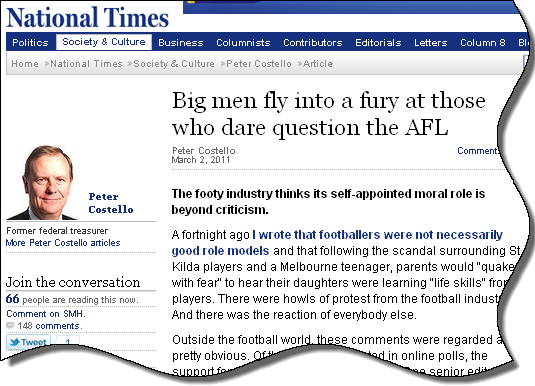 It is a delightful read as the reaction to the original article is explained:

“The football industry — by which I mean the administrators, the players, the journalists and all those who earn their income one way or another from professional football — was incensed. I hadn’t realised how many ex-players have radio shows until their producers rang wanting my response as they queued, one after the other, to berate me over the airwaves.

“Then TV reporters discovered that Collingwood players had criticised me on Twitter. They wanted to know how I responded to these tweets, which they ran as news stories on the evening TV bulletins! The next day, sports columnists were opining on my character and whether I had any qualification (they decided I didn’t) to talk about philanthropy.”

Why the indignation? The only conclusion I can reach from this headline in The Australian this morning is that the powers that be at the newspaper do not agree with democracy:

What has spurred this latest anti-Green story is an attempt by Bob Brown and his team to remove the power that the executive of the national government has to overrule laws passed by the elected governments of the Australian Capital Territory and the Northern Territory without even a reference to the federal parliament.

The proposed change in the law would still allow either the Senate or the House of Representatives do disallow a territory law as happened 1997 when a bill sponsored by Liberal MP Kevin Andrews overruled an NT law legalising euthanasia. What it would stop is actions such as those of former prime ministers John Howard and Kevin Rudd who ordered the Governor-General not to sign bills authorising same-s-x marriage.

So before there can be any same-s-x marriages in the ACT or legalised euthanasia in the ACT and the NT, the current Greens bill has to be passed by both houses of federal parliament. If and when that happens both of those houses will still have the ability to strike down any territory law that a majority does not approve of. Hardly, I would have thought, a radical proposal.

Bomber Kevin at large. So our macho man Foreign Minister Kevin Rudd is urging the international community to impose a no-fly zone over strife-torn Libya as soon as possible. I wonder if his colleagues, back in Australia while he flits around the world, approve?

Surely there are some members of a Labor cabinet who would not fancy the policy he is advocating in their name as the top US commander General James Mattis warned on Tuesday that enforcing a no-fly zone over Libya would first require bombing the north African nation’s air defence systems.

A no-fly zone would require removing “the air defence capability first,” Mattis, the head of Central Command, told a Senate hearing. “It would be a military operation,” the general said.

The polling obsession continues. More of that “internal party polling” rubbish this morning. The Tele in Sydney has Coalition polling across state seats found finding that almost two thirds of people are against a carbon tax. Meaningless nonsense.

Meanwhile, the Oz brings us new2s from “confidential polling conducted for the NSW Nationals” purporting to show that voting support for Rob Oakeshott has fallen through the floor. More meaningless nonsense.

[Bomber Kevin at large. So our macho man Foreign Minister Kevin Rudd is urging the international community to impose a no-fly zone over strife-torn Libya as soon as possible. I wonder if his colleagues, back in Australia while he flits around the world, approve?]

Something on the liver this morning Richard. Or just an anti Rudd rant? As you should be aware, Mr Rudd has not been the only voice calling for a no-fly zone, he is one of many in the world community. You wonder if his collegues approve? I phoned 6 of them this morning, time constraints prevented contacting more, all 6 had no problem with Mr Rudds comments. Perhaps you could have done the same, for personal enlightenment

David – give me a break. I’m that old fashioned type of journalist who used to leave the room whenever a politician tried to speak off-the-record so the chances of any polly telling me that they disagreed with Rudd, knowing they would thus spark a controversy, would be nil. I’m also strange enough to think that decisions about whether Australia supports acts of war should be made at the very least by Cabinet and more properly by the Parliament

Richard I amire your modesty. What’s an old fashioned Journalist? I know not of the beast of whom you speak. I’m sure Mr Rudd would not be declaring war on Libya on behalf of Australia. Too silly. Incidentally I read on the BBC site yesterday the Brits are still talking no fly zones or even more drastic measures. That from First Secretary of State and Secretary of State for Foreign and Commonwealth Affairs, The Rt Hon. William Hague MP, KR’s equivalent.
Guess you just don’t have any nice vibes about Kevin, I bear him no grudges, he is doing a fine job as FA Minister IMHO.
So while we differ on this one, I still find your column interesting and will continue to read daily.
Cheers.