The lucky-dip stall that is carbon pricing

The carbon pricing to date in Australia has been like an intimidating and not very enticing lucky-dip stall at a carnival, writes John Connor, CEO of The Climate Institute.

The carbon pricing to date in Australia has been like an intimidating and not very enticing lucky-dip stall at a carnival.  There are plenty of voices trying to stop, slow or scare away those interested in taking the dip into action on pollution and climate change by focusing just on the costs.

Today in Parliament the independent member for New England, Tony Windsor, launched the latest research and web resource from The Climate Institute. This research shows, region by region, how pollution pricing and clean energy support policies can unlock the door to tens of thousands of regional job and investment opportunities. The research also  highlights the skills and industry development policies that are necessary to realise this potential. 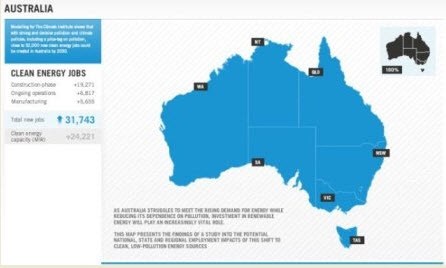 The Climate Institute commissioned leading energy and industry specialists to model the opportunities and to talk to regional business and community leaders, to not only see what extra opportunities exist but to see what else is necessary to turn this opportunity into reality.  This research from Sinclair Knight Merz-MMA and Ernst & Young, a series of policy briefs, state and regional snapshots, regional road maps and the methodology behind all of this can all be found on at Clean Energy Jobs: Regional Australia

The research demonstrates the importance of a long, loud and legal price signal on pollution but also that while a price is necessary, it is not sufficient to achieving the twin goals of cutting Australian pollution and transforming our polluting and inefficient economy into one that is cleaner and more efficient in the energy that it uses.

The 2020 Renewable Energy Target  plays a critical role in bringing on a range of clean energy resources and backing up a significant price on pollution that drives switching from coal to gas in terms of existing base-load. Alongside clean energy policies like the RET, skills and industry development policies are crucial in turning modelling opportunities into action on the ground.

The research shows we’ll need prices on pollution at $66 per tonne and rising by 2020 to help shift our economy to cleaner industries and lower pollution to levels that matter.  The lower the price, the greater the need for other regulations and other incentives across the economy to drive the necessary change. For example the model shows a starting price in 2012 of $47 a tonne but, looking closer, the renewable energy legislation does the hard work driving the renewable investment requiring a lower initial pollution price that ensures existing base load is switching from coal to gas and cleaner alternatives.

This is a debate about how we make businesses take responsibility for the pollution they create and the incentives needed for investment by them and others in cleaner industries and technology.

The economic imperative in this for Australia, and for regional Australia, was recently highlighted by BHP’s chief executive Marius Kloppers who recently said that “To remain competitive in a future carbon-constrained world, Australia will need to turn into a lower carbon economy.”

The economic risks behind Klopper’s call was reinforced by global reinsurers reconsidering risk after the recent bout of weather extremes in Australia and around the world.  Munich Re, a global reinsurance company, earlier this year stated that the higher number of weather-related catastrophes and record temperatures, in different regions of the world, provide further indications of advancing climate change.  They and others are reconsidering insurance premiums and availability.

Two weeks ago, the world’s institutional investors, the managers of our retirement savings and superannuation funds, released a landmark report setting out clearly the multitrillion dollar risks involved.  These include not just the estimated more than $4 trillion costs to the physical environment, health and food security.  They also include $8 trillion costs if policy changes are badly handled.

The move is on to a global clean energy economy and our reinsurers, our superannuation funds and smart investors are beginning to realise this is the case.  Indeed in 2010 clean energy investments hit record levels globally at $243 billion.  Australian investment by any measure is lagging behind the rest of the world.

This research released today shows again the largely untapped energy resources that Australia has in geo-thermal, large scale solar, bio-energy, hydro, wind and natural gas.  The modelling shows that by 2030, close to 43% of Australia’s electricity could be produced from clean energy, up from about 12% today.  Regional analysis shows that greater proportions of renewable electricity are attainable with extra policies and focus.

The research also sets out that taking decisive action will increase jobs in the electricity sector.  The research shows that net employment in the power sector increases by around 34,000 extra jobs out to 2030. This is the case in each state considered.

The implications for policy  from this research are that  credible pollution price increases over time can level the playing between clean and renewable energy and conventional polluting sources of energy.  It also shows, however, the critical importance of supporting policies such as a renewable energy target and skills and industry development policies.

With last week’s announcement of architecture for a carbon pricing mechanism, the pollution politics carnival of rent seeking, scare campaigns and serious public debate has well and truly begun.

The Climate Institute offers this research as an alternative information source to make clear the opportunities for regional Australia and Australia that exist in taking action.

…to make clear the opportunities for regional Australia and Australia that exist in taking action.

Well, no, since it doesn’t even mention nuclear, it doesn’t.

This or Tony Abbott’s action plan. Gee, a hard choice.

Of course Lorry is a climate scientist!!Give me a break.

Praise the Lord and pass the ammunition.
About time someone started talking sense and recognising both the potential perils and potential possibilities opened by the Climate Change Challenge. Thank you Climate Institute.