The Australian Communications and Media Authority has slapped Channel Nine with a breach of the Commercial Television Industry Code of Practice over its uncritical reporting of Grand Prix attendance figures. Plus, the other media news.

Nine chastised for inflated race figures. The Australian Communications and Media Authority has slapped Channel Nine with a breach of the Commercial Television Industry Code of Practice over its uncritical reporting of Grand Prix attendance figures.

On the final day of last year’s race, Nine’s 6pm news bulletin stated the attendance as “108,500”, which as Crikey readers are fully familiar, is a dubious estimate provided by the Grand Prix Corporation who never release their methodology (kind of like the “police estimate” at union rallies). It drew the ire of veteran activists at Save Albert Park, who accused the network of ignoring its blizzard of media releases telling them to avoid the official line. In its ruling ACMA harangued Nine for “failing to present factual material accurately by reporting the attendance figures as fact”. However, the regulator found no breach over the non-correction of the error because the story focused mostly on the thrills and spills of the race itself.

The long-running dispute over crowd figures is expected to flare again when this year’s circus — on track to again cost the Victorian taxpayer about $50 million — fires up in a month’s time. — Andrew Crook

What about the dodgy builders at the ABC? We gave a wrap to the ABC over its Frontline-esque promos for the new-look 7.30 on Friday. New ads appeared over the weekend — with host Leigh Sales declaring there’d be “no dodgy plumbers” on her show. A heartening promise.

Meanwhile, the ABC is blaming the construction and wiring of a new set for delaying the debut of sans-Report 7.30. But one Crikey commenter did his own investigation. He wrote on Friday: “I phoned a reputable joinery and asked how long they estimated it would take to design, build and install a set. Of that type and approx size? Oh roughly a month going slow.” Maybe the ABC is using dodgy tradies … — Jason Whittaker

Cartoonist departs The Age. The Age‘s respected back-page cartoonist Shelley Knoll-Miller has departed Fairfax, with Andrew Weldon taking over the joint gig in collaboration with Oslo Davis. According to Knoll-Miller’s blog:

“I’m no longer being published in The Age. I’ll take this opportunity to slow down my cartooning business this year, taking small jobs but nothing major. I’m taking time off to build our house. (I’ve been trying to build, work and care for kids for a few months now and it’s not a winning combination.) Whilst we are employing folk in overalls to do their power-tooled banging about, it will be a Strawbale house so there will be lots of rendering to do. And tidying up after the o’power-tooled ones. And keeping my small children away from the power tools.”

A footnote states: “I don’t want your pity, just send me a cheque, or a bottle of gin.” — Andrew Crook

Dog-gone, police discredit paper via Facebook. “I believe very little of what I read in the Sunday Mail …” Thus reads the first comment on the Queensland Police’s Facebook page in response to a story in the Brisbane Sunday Mail. John Howard took to talkback radio to give him a direct line through the compulsive and convulsive world of spin that is our mass media — now police are showing how social media does the same for them. Here’s a story from the Sunday Mail outlining how the coppers froze to death some cute puppies under their care. 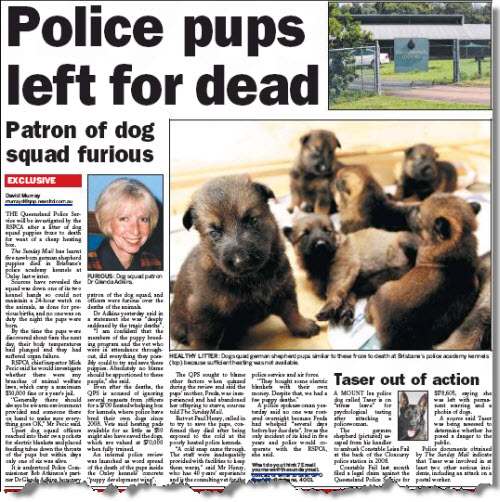 THE Queensland Police Service will be investigated by the RSPCA after a litter of dog squad puppies froze to death for want of a cheap heating box.

At least from what the police say on their Facebook site, this was mostly nonsense …

Some of you may have read about the deaths of some puppies at the QPS Puppy Development Program last year. We thought you might like to see some of the facts surrounding this sad incident which weren’t included in the story …

In five years of breeding puppies, this is the only incident where we have lost a number of puppies soon after birth. We have a very low puppy mortality rate compared with dog breeders generally. . . . Last May, ‘Freda’ an inexperienced bitch in the QPS dog breeding program whelped six puppies (the ‘M’ litter) several days before her due date. At the time, she was in a room which was equipped with a heater and lighting …

The Sunday Mail got two comments at the bottom of its story. At the time of writing the QPS Facebook post has 133 comments, beginning with the one which forms the heading to this article. — Nicholas Gruen

Hollywood Bligh’s movie moment. In the month following Anna Bligh’s famous “Queenslander” speech, a major factor in her rebound in the polls, LNP operatives have been feverishly trying to work out whether the spontaneous outburst may, in fact, have been lifted from somewhere else. The investigation into the heartfelt address, the rough notes of which were donated a few weeks ago to the State Library, has focused on the following stanza: “I said earlier this week that this weather may break our hearts … but it will not break our will.”

While the probe has proved mostly fruitless, the closest contender is a scene in the 2008 thriller Eagle Eye starring Shia LaBeouf and Michelle Monaghan. Near the end of the movie our hero is in the Capitol Building is trying to stop a bomb plot while the President, played by Madison Mason, is delivering his State of the Union address. Says the Prez in eerie Bligh-esque fashion:

“But I say to you to you tonight, that our hearts may be broken but our spirit may never be broken.”

Very close, but not quite a cigar. Yet. — Andrew Crook

Huffington branded a political sellout in face of AOL deal

“Since she announced that the HuffPo was being sold to web giant AOL for $315m, Huffington has been accused of being a political sellout and someone who made a personal fortune from the labour of thousands of bloggers who write for no pay.” — The Observer

“The Rockville Central, a community news site in the Washington D.C. area, will move all its operations and news coverage to its Facebook Page starting on March 1. This risky move by the site’s editor, Cindy Cotte Griffiths, highlights Facebook’s growing role as a platform for journalists to use for social storytelling and reporting.” — Mashable

There is no Henderson: Telegraph’s Libyan reporter mystery solved

“Had the Telegraph found a new journalistic star? Not really, because there is no Mr Henderson. The paper had created, to use old Fleet Street jargon, ‘a house byline.’ It was done specifically, so I understand, to conceal the identity of a freelance who had managed to get into the city and who feared reprisals should he be named.” — The Guardian

Is there such a thing as ‘breaking news’ any more?

“If there’s one aspect of the media business that has been disrupted more completely than any other, it’s the whole idea of “breaking news’.” — Gigaom

Does it even get bitterly cold in Brisbane? BOM stats say no.

“Breaking News” – remember the Stop Press in the newspaper?

“… host Leigh Sales declaring there’d be “no dodgy plumbers” on her show. A heartening promise.”

Good grief, now I’m really worried. It hadn’t occurred that Sales and Uhlmann would be pursuing such drivel so why even mention it? Whoever is putting together the promos for 7.30 seems to be hexing it instead of selling it.