The Golden Choc-Tops: the wrong side of the tracks, and cinematic wank-fests

Presenting the fifth and final day of Crikey’s annual film awards, The Golden Choc-Tops. Today the Best Wrong Side of the Tracks Story and the Most Sickly Pseudo Intellectual Cinematic Wank Fest.

Presenting the fifth and final day of Crikey’s annual film awards, The Golden Choc-Tops. Kick on at the after party by joining Luke Buckmaster and The Enthusiast’s Mel Campbell — plus cameos from the rest of the Crikey gang — for our Academy Awards live blog, which kicks off around midday on Monday.

The Best Wrong Side of the Tracks, No Hoper Comes Good Story

Cinema has long been adorned with tales of wrong-side-of-the-tracks no-hopers who, through trial, tribulation and an inspiring speech or two, eventually achieve the emotional equivalent of Andy Dufresne’s inspiring legacy: to “crawl through 500 yards of shit smelling foulness and come out clean on the other side”.

Over the last year a number of features followed lower-class protags who struggle to find a way out of skid row. Ben Affleck played his lost puppy dog card in The Town as a Boston bank robber who tries to rob his way out of the slums, and in the magnificently awful Burlesque Christina Aguilera is a small-town gal who moves to the big apple to reach for the stars.

The classy low-budget British kitchen sink drama Fish Tank, which won the Jury Prize at last year’s Cannes Film Festival, came close to the award. Director Andrea Arnold follows at an intensely personal proximity a wily 15-year-old girl (Kate Jarvis) who drinks regularly, is often in trouble with the law and develops a questionable relationship with her mother’s new beau. She doesn’t “come good” as such — this is British social realism, after all — but there’s more than a hint of bluer skies ahead.

But the 2011 Golden Choc-Top for the Best No Hoper Come Good Story goes to director David O. Russell’s inspiring The Fighter. After all these years in bit parts and the occasional lead role, Mark Wahlberg has finally landed a powerful right-hand dramatic punch with his portrayal of Micky Ward, a decent-hearted boxer from a poor family in Lowell, Massachusetts. Micky has an overbearing mother, a gaggle of bitter aunts and his coach and brother Dicky (Christian Bale) is a crack addict.

The Fighter is a vintage rags-to-riches drama and one of those boxing movies that lulls viewers into pushing aside the sport’s mindless brutality in favour of “you can do it!” crowd support. We barrack for Micky to persevere, to make the knock-out punch, to crawl through shit-smelling foulness and come out clean on the other side.

It’s the genre that turns the stomach of your average multiplex punter and makes them run for the hills: the hoity-toity drama or, if you like, the pseudo-intellectual cinematic wank-fest.

Nobody really expected the Julia Roberts vehicle Eat Pray Love to be a work of intricate emotional depth, so why did it feel unrelentingly pretentious? The story follows Liz as she fumbles her way through a pre-mid-life mid-life crisis. She drops her husband Stephen (Billy Crudup) like a sack of potatoes and pursues a two-point plan: hook up with other men and eat nice food. Trouble is, Roberts, director Ryan Murphy and everybody else involved treat the film’s trashy screenplay with utmost seriousness, and the result is a sickly shambles.

Then there was the awkwardly timed, acted and written action/comedy The Tourist, from filmmaker Florian Henckel von Donnersmarck, who also achieved the difficult feat of making a film that feels both stupid and extraordinarily self-important.

But the Golden Choc-Top winner for The Most Sickly Pseudo Intellectual Cinematic Wank Fest ran rings around the competition: director Julie Bertucelli’s French/Australian co-production The Tree. It’s a maudlin art house drama in which one of the lead characters is — wait for it — a gigantic angry fig tree that’s been infused with the spirit of a grieving family’s dead father. And this is anything but a comedy.

It might have been unintentionally amusing were it not for the film’s solemn performances and depressing day-after-a-wake atmosphere. Oh, and the book on which it was based is titled Our Father Who Art in The Tree. Does it get much more pretentious than that? 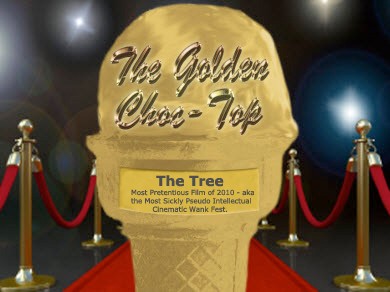 How could “Eat Prat Love” not win a pretentiousness award with that title? 😉

That should have been the actual title!

Damn you Buckmaster!!!
I heartily agree on The Fighter for the “wrong side of the tracks award”.

But why?…Oh WHY? did you have to mention The Bloody Tree Movie????
I struggled to grit my teeth through the first twenty tiresome minutes of it,
when I was fortunately distracted by having to clean a blocked toilet.
So I’d actually forgotten all about it and it would have remained blissfully buried at the bottom of a pile of rejects.
Now I’ll feel perversely drawn to watch the rest of it.
A pox on your choc-tops. 🙂

Juffy, you did not see the Tree , you could not not have seen this movie, this was as described, EAT PRAY LOVE was not even a contender….Luke, on the freakin’ money

Pete – I think you might have missed the prat/pray typo in the original article. 😉