Claws are out in grubby Gosford NSW election stoush

A month out from polling day, the marginal electorate of Gosford is standing out as a beacon of bitchiness in an otherwise bland NSW election campaign.

A month out from polling day, the marginal electorate of Gosford is standing out as a beacon of bitchiness in an otherwise bland NSW election campaign.

The Labor candidate accuses her Liberal opponent of abusing his position as a local councillor by using council staff and property for campaign purposes. The Liberal candidate, in turn, has slammed her as grubby, desperate, a liar.

The Greens candidate is slinging mud in both directions. He says he sacked his Labor opponent as his divorce lawyer for allegedly harassing his ex-wife’s lawyers. The Liberal candidate, he says, ran council into the ground as mayor and today has a fondness for extravagant junkets.

The brouhaha started, in true Central Coast style, with a night at the local senior citizens hall. Earlier this month, Liberal candidate Chris Holstein, a local councillor, used the council-owned Ettalong Senior Citizens Centre to host meet-and-greet events with voters. When informed of this, Labor’s Katie Smith, a local solicitor, quickly fired off a letter to Gosford Council’s general manager demanding an investigation. She also sent a media release to the local press accusing Holstein of an abuse of office.

“To use council owned properties to conduct his election campaign meetings is just an arrogance and insult to the ratepayers as after twenty years as a councillor he should know better,” Smith wrote. 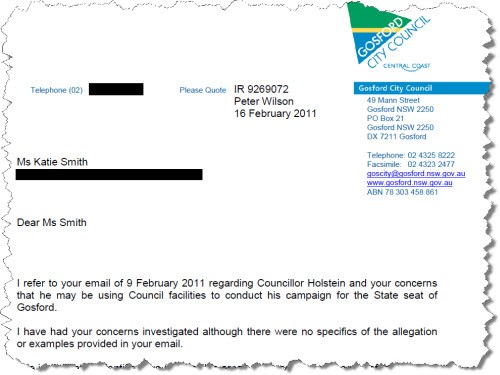 An unedited copy of Smith’s media release was published on the front page of the Gosford Central Community News and the story was picked up by local radio.

Last week Gosford council’s general manager Peter Wilson wrote a letter to Smith informing her an investigation had found no evidence to support her allegations. Wilson wrote that Holstein paid for the senior citizens event at “the appropriate rate and in accordance with the general conditions of hire by the public”.

Despite these findings, Smith told Crikey that she didn’t regret going public with her claims before checking their veracity: “I got really good headlines and really good press out of it.”

So what is her next move? “I’m going to leave it lie. I’ve got four days till the next paper comes out so I’ll wait and see.”

Local councillor and Greens candidate Peter Freewater backs Smith’s claim about the use of council staff to track and publicise state Labor’s broken promises to the area. He says it is “inappropriate”.

He told Crikey the council’s media officer had been sending the list of broken promises to the local press, as shown by this Peninsula Community Access News story. It had been Holstein’s idea to track state Labor’s broken promises, he said. 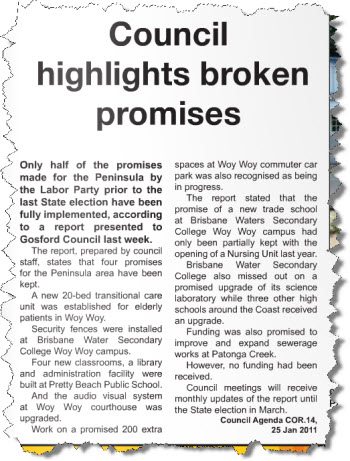 Freewater said Holstein doesn’t deserve to be elected because he was “absolutely woeful” during his four terms as lord mayor, blowing $52 million on foreign investments and stopping major developments that would have created local jobs.

Earlier this month Freewater slammed Holstein and other councillors for spending $8000 of ratepayers’ money on an all-expenses paid weekend “junket” to a luxury resort at Lake Macquarie. But he is no fan of Labor’s Katie Smith either.

“Katie Smith is not a very popular person around here,” he said. “She’s a divorce lawyer and most of the people around here are single parents who hate her.”

“She was working for me as my solicitor at one stage and I had to sack her because she was an absolute nightmare. She was costing me a fortune… I was getting divorced and somebody said to me: ‘If you’re getting divorced make sure you’re wife doesn’t get Katie Smith because she’ll tear you to shreds because she’s evil. Make sure you get her.’ I thought that made sense so I hired her as my divorce lawyer.”

He said his wife became upset when Smith began hassling her lawyer for documents: “The way she was doing it was completely unscrupulous because the ombudsman said so.”

Smith said: “I would love to be able to reply and tell you what really went down but I can’t … I’m not allowed under my professional rules.”

Chris Holstein refused Crikey‘s repeated requests for an interview. In a statement he said council’s investigation “just goes to show that this is nothing more than dirty politics from a candidate who represents a party that has nothing to say and nothing constructive to offer the people of Gosford”. He demanded that Smith offer him an apology.

The Liberal Party’s Holstein is expected to win Gosford, a seat currently held by retiring Labor MP Marie Andrews with a margin of 4.9%.