Presenting day four of Crikey’s annual film awards, The Golden Choc-Tops, rolled out every day this week in anticipation of next Monday’s Academy Awards. Be sure to join Luke Buckmaster and The Enthusiast‘s Mel Campbell — plus cameos from the rest of the Crikey gang — for our Oscars live blog, which kicks off around midday.

The Best Unreleased Film of 2010

A culture of cinema-going as vibrant as Australia’s each year exposes select audiences to a number of quality features that never receive a national theatrical release.

Last year the hilarious political documentary The Red Chapel presented a rare glimpse of life behind closed doors in North Korea. Director Mads Brügger and two Danish-Korean colleagues obtain permission from the North Korean government to fly over and stage a comedy show. Once they land the team are surprised and amused to discover that government delegates seize control of the production and rebuild it from the ground up.

But the winner of the Golden Choc-Top for best unreleased film in 2010 goes to L’illusionniste, a charming near-silent and traditionally animated French feature. Director Sylvain Chomet, whose previous film was the equally alluring The Triplets of Belleville, follows the story of an aging magician whose on-the-road career in Britain is petering out. He meets and befriends a young maid who believes he has magical powers.

The screenplay was penned by inimitable French auteur Jacques Tati, most famous for inventing the gangly, pipe-smoking character Monsieur Hulot in films such as Hulot’s Holiday (1953), Mon Oncle (1958) and Play Time (1967). It was never produced and Tati died in 1982. L’illusionniste is very much adult animation, rich in pathos and wry humour. The film is yet to be released on DVD but enthusiasts with a multi-region DVD player can pre-order it on Amazon. 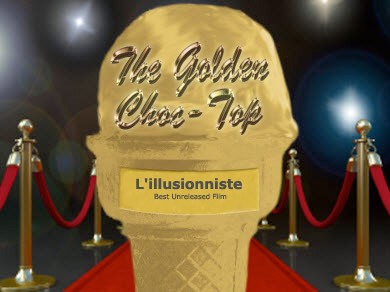 Last year the winner of the Golden Choc-Top’s George Clooney Award for Silky Smooth Screen Charisma was … George Clooney (for Fantastic Mr Fox). And the runner-up was … George Clooney (for Up in the Air). This year our liquid cool boy George threw his hat in the ring with director Anton Corbijn’s slow-moving suspense thriller The American. But it was Clooney in stoic hardened assassin mode rather than “turn the ladies into puddles of goo” mode. So this year, George, no dice.

Johnny Depp may have been considered a viable contender for The Tourist, if he he hadn’t spent much of the running time speaking out of the side of his mouth and looking like he was slowly eating his own face. Jarvier Bardem, playing Julia Roberts’ beau in Eat, Pray, Love, might have had a crack if the film hadn’t painted him as a hunk of dead meat strung up and packaged to be picked like a juicy steak at a supermarket.

This year an upset win for the Clooney goes to none other than Monsieur Baldwin — Alec, to be precise — for his role as a smug, overweight but undeniably silky smooth aging philanderer in Nancy Meyer’s rom-com It’s Complicated.

Baldwin plays Jake, the ex-husband of Jane (Meryl Streep). Jake went on to marry a young and snobby trophy wife, but after a drunken evening in a hotel he returns to the scene. Baldwin contributes an unexpected charming performance — that tub o’ cinematic silk steals scene upon scene, showing up the rest of the cast and dictating the film’s loopy energy. Nice work, Alec. 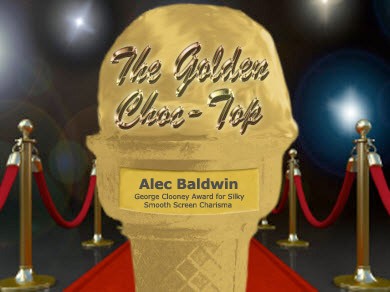 The Golden Choc-Tops: the wrong side of the tracks, and cinematic wank-fests