No real winners for Nine. Holes all over: Tuesday and Wednesday nights the big problems. Sundays OK. Underbelly, a disappointment on Monday nights, now ended.

The Biggest Loser Families series is Ten’s stand out so far, along with Modern Family. Ten’s big problem is 6-7pm — a change of management will see further changes.

Naturally Packed To The Rafters is the big winner for Seven, but My Kitchen Rules is proving to be the sleeper. Home And Away is back and doing better than a year ago. Better Homes on Friday nights is also solid in return. A couple of time slots can do better (and can they fix up dull Saturdays?). — Glenn Dyer 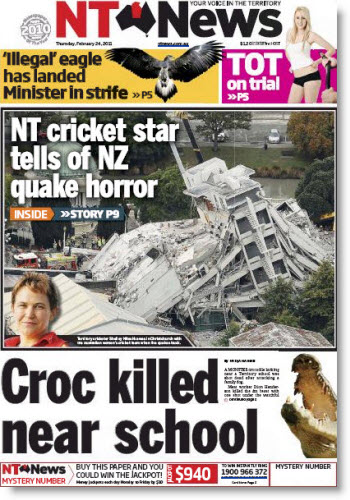 A look at the film Murdoch

“Back in December, I told you about a screenplay that’s been making the rounds in Hollywood, earning praise from numerous producers but failing to find one willing to make it. Any backer would need not just cash but also guts since the script, by British screenwriter Jesse Armstrong, is an intimate family drama about one of Hollywood’s most powerful men: News Corp. chairman Rupert Murdoch.” — Forbes

Churnalism or news? How PRs have taken over the media

“A new website promises to shine a spotlight on ‘churnalism’ by exposing the extent to which news articles have been directly copied from press releases. — The Guardian

“The attack on Lara Logan of CBS was a worst-case scenario for many female reporters. Yet gropes and unwanted advances are common occupational hazards. Here are some tips from safety experts who have trained soldiers and journalists.” — Columbia Journalism Review

The hectic schedule of a social media manager

“BRAND AMBASSADORS. CONTENT MANAGERS. EVANGELISTS. These are all words that are often used to describe the constantly evolving social media manager of today. In order to be a successful one, he or she must take on a pretty demanding schedule of constant updates, meetings and tweets — all the while maintaining an effective online presence.” — Socialcast

Virus Watch: the end of Honest Abe, and a novel solution to the bog roll crisis

So. That explains it. Or rather, doesn’t explain it, but does let us know that it’s happened.

The kind of gratuitous chopping-about of TV schedules mapped out here is why some people – no one I know, no point in asking, just talking in the abstract here – are inclreasingly inclined to get their fix of favourite shows via the intertubes.

The Murdoch movie: William Randolph Hearst was a mighty publishing cheese in his day but it didn’t prevent someone coming up with the cash to produce the iconic and scathing “Citizen Kane.’