A step-by-step guide to manufacturing a story, c/o The Oz

This headline appears on page 9 of The Australian today: "Crikey forced to remove fake Abbott story". That was news to us. Let us explain what happened...

This headline appears on page 9 of The Australian today: “Crikey forced to remove fake Abbott story”.

We’ve criticised The Oz in the past for its obsession with itself and so we hesitated to write this — but for a lesson in how a story makes it into the front pages of the “The Heart of the Nation”, this one’s worth highlighting. Consider it a community service announcement of sorts.

The story, written by Caroline Overington, doesn’t appear to be online for some reason.

Instead, it’s presented in bold alongside coverage of the Christchurch quake:

Overington’s story stems from an email that was sent to our boss@crikey.com.au yesterday from Matthew Franklin — chief political correspondent for The Australian.

Franklin kicked off the email (subject line: bad taste) with the line NOT FOR PUBLICATION and we’ll honour that.

He alerted us to a “post” on the “Poll Bludger blog site” that sought to make light of the New Zealand earthquakes as rescuers worked to free victims, he noted its offensive nature and asked how we could justify linking his name to it.

We had no idea what he was talking about.

Franklin had pasted the offending item in the email. It took a little while to work out that in fact Franklin’s name had appeared in a comment written by a reader under a blog post by Poll Bludger entitled Newspoll 50 – 50.

The comment, # 502 of more than 1400 at the time (there are now 2285 comments on that post), was an attempt at satire aimed at —  we think — Tony Abbott, the notion of mateship, Pastor Danny Naliah, the coalition’s line on the flood levy and The Australian and/or Franklin. It was presented in the style of a breaking news article from The Australian about the New Zealand earthquakes, below the byline of Matthew Franklin.

One line, as quoted by The Australian today, read: “There’s no doubt that we over here have bigger hearts and pitch in more when the shit hits th… er, when things get tough.”

It was bad taste, and it wasn’t especially funny. We conceded that to Franklin and William Bowe took down the comment, which is in line with our code of conduct, and Poll Bludger’s substantial moderation policy.

We can only assume that Franklin is an avid fan of Poll Bludger and reads each and every of his hundreds, sometimes thousands, of comments. That or Franklin has an alert account set up to scan for mentions of his own name, but that, of course, would be mere speculation.

The reader’s prose was not, however, a Crikey story. Or a Crikey article. Or even a Crikey blog post.

It’s an important distinction as any publication knows, because to label it as such suggests a level of editorial commissioning that simply wasn’t there.

I replied to Franklin:

Thanks for getting in touch — in future the best way to contact me is this email address. Boss is the generic contact email and doesn’t get  to me as quickly. Alternatively, my phone number is below.

Poll Bludger moderates his own comments, most of which (and there are 1400 of them on that post) go through automatically unless the filters pick up a word. We’ve found this at comment 502 and have deleted. We don’t defend it but nor do we claim ownership of it — as I’m sure you appreciate these things can slip through moderation but thanks again for bringing it to our attention and it has now been taken down.

By the time of writing that email, I’d already received a message from The Australian‘s Caroline Overington on my mobile.

She rang the office again about half an hour later.

Overington explained that Matthew Franklin had alerted her to the comment and asked if I was aware of it. I confirmed that I was, that I had just emailed her colleague back to confirm that the comment had been taken down.

Overington politely thanked me, and explained that’s all she wanted to know —  if indeed we were going to take the comment down. I again confirmed that fact, and pointed out that it was one of 1400 comments. Overington did not ask me for a comment. Before saying goodbye, she mentioned the difficulty of moderating comments.

I did not hear back from Matthew Franklin.

And so, this morning, readers of The Australian found that the paper had devoted space on Page 9 to this:

We report. You decide. 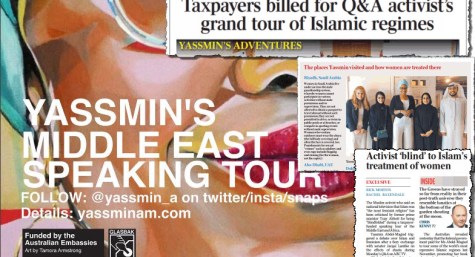 Wow. Just wow. If I say “The Australian stands by its record on blowing things out of all proportion, deliberately taking them out of context, and ascribing one person’s views to a whole organisation” do you think your retraction will make Page 11?

I’d be very interested in what form the retraction will take. Maybe an online poll? They’re fond of them.

Do you think the Australian was right in promoting freedom of speech in this country?

Well, really. I expected better of Caroline Overington and The Australian.

Matthew Franklin likes to read Crikey , its his only way of getting the truth , as the OO is only a Liberal party fan club for the dumb punters. Maybe Crikey could get the OO to remove some of their blog comments ?????????????? I have noticed that NEW Stories on Crikey take about 3 days to turn up as a NEW Story on the rupert rags , except for Rupert’s boys that Phone Hack everbody in the UK or when Abbot opens his mouth ( insert Rascist dog whistle ) and nods for 38 seconds of silence.
” The Australian forced to remove fake story about Crikey’s fake story of Abbot “

I want to see the if the shoe’s on the other foot, too.

Is News Ltd saying they are editorially responsible for every lunatic comment on the comments pages under their agents provocateurs? Or would that only be if a staff member of another media organisation was misleadingly represented or libelled?

I won’t hold my breath waiting for an answer.