“Aviation insider” on Virgin Blue culture. The disturbing report of two Virgin Blue staffers suing over claims they were sacked because they were pregnant is symptomatic of the rather strained, often poisonous, culture that exists in an organisation that, two years ago, was held up as one of the best places to work, was viewed as […]

“Aviation insider” on Virgin Blue culture. The disturbing report of two Virgin Blue staffers suing over claims they were sacked because they were pregnant is symptomatic of the rather strained, often poisonous, culture that exists in an organisation that, two years ago, was held up as one of the best places to work, was viewed as a progressive company and certainly one that respected women and their place in the business.

When the new CEO (ex-Qantas executive John Borghetti) took over, a cold wind of change swept through the company, with a lot of forced departures and a fractured morale. The place has not quite recovered. Former CEO Brett Godfrey would be mortified to read these reports, having personally appointed the two unnamed women, who are well known to Australian media and who were highly respected for the way they dealt with media in rain, hail or shine, which is the true mark of the PR professional.

Ironically, this open and accessible media relations culture that was fostered by Godfrey at Virgin has now gone out the door, replaced by the sort of hostile, defensive and unresponsive media relations one has come to expect from Qantas.

Gordon’s key in Nine share float. Bruce Gordon, owner of the WIN regional TV network and a shareholder in Ten, will be more important to the mooted float of the Nine Entertainment Company than many people realise. WIN has an affiliation agreement with Nine that is perhaps the network’s biggest source of earnings and cost recovery. That agreement has less than a year to run, according to chat from the industry.

There’s big questions for Gordon and Nine: has a new agreement been negotiated (apparently not)?; do the investment banks looking at the float yet understand the importance of the WIN relationship (which is breaking down in Perth with very weak ratings this year for the Nine station owned by Gordon)?; can a float happen without an affiliation agreement (the chat is no, because of the importance of the affiliation fees WIN pays Nine each year — well over over $100 million)? Bruce Gordon will have to be engaged by Nine, CVC and their advisers to make the float happen…

No money for breastfeeding support. There’s a funding crisis happening at the NSW branch of the Australian Breastfeeding Association. I’m an ABA member and recently received this email asking for help. It may seem a trivial issue to some, but early infant and mother health should be a central issue to any society that calls itself equal and democratic. Australia’s breastfeeding rates are shockingly low — about 90% start but most have given up by the time the baby is four months old. Research shows this is directly due to a lack of support, which is what the ABA provides through its phone line and group meetings. I would like to know what the Liberals and the Greens in NSW propose to do about this issue.

The Age gets charitable. In my letterbox yesterday: a letter concerning a “partnership” between Oxfam Australia and The Age, in which $15 of a $99 Thursday-Sunday Age subscription would be donated to Oxfam. Lovely. 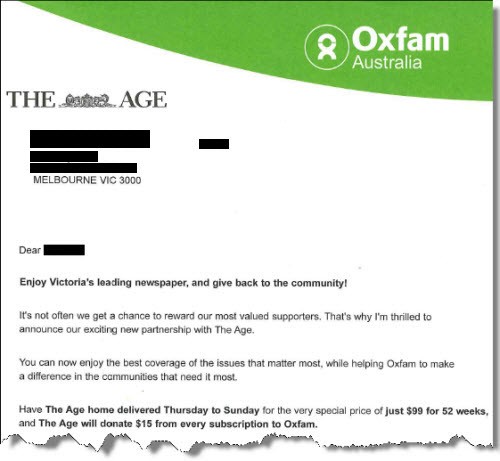 Thing is, I’d received an offer for the same subscription (without the charitable donation) the previous week — for $52. That’s a $47 difference from the “partnership” price, of which the majority ($32) would be collected by The Age, not Oxfam! Incidentally, I’ve been receiving The Age (Thursday-Sunday) at $52 per year for the past couple of years. The end of my subscription is approaching at the beginning of March — that makes a period of three years for which The Age is offering the four-day subscription at $1 a week.