Day three of the Golden Choc-Tops, with awards today for the Best Australian Film of 2010 and the Malcolm Tucker Award for Most Deplorable On Screen Personality. And the winners are...

Presenting day three of Crikey’s annual film awards, The Golden Choc-Tops, rolled out every day this week in anticipation of next week’s Academy Awards. Yesterday, sweaty rides to nowhere and the best sequel of 2010. Today — drum roll, please — the winners are…

Quality-wise 2010 may not have come close to matching the bumper crop of Australian films that arrived in cinemas in 2009 (Balibo, Samson & Delilah and Mary and Max) but going purely by ticket sales it was a more successful year. For the first time in more than a decade nine Australian features earned more than $2 million at the national box office.

Jane Campion’s Bright Star, a sumptuously shot drama spanning the later years in the life of penniless poet John Keats, was deeply romantic, equal parts beautiful and tragic. Daybreakers, an inventive vampire film from tag-team directors The Spierig Brothers, is sure to become a cult classic.

But the best and most memorable Aussie film of 2010 was also our most acclaimed: Animal Kingdom, the debut feature of former film journalist David Michôd and the film for which Jacki Weaver has been nominated for a Best Supporting Actress Academy Award.

Michôd’s Melbourne-set crime drama is essentially a portrait of a dysfunctional family, led by Weaver as the seen-it-all-before matriarch. The film would make an auspicious debut for any filmmaker, and if Michôd never tops it, a pretty decent magnum opus too.

The quality of acting in Animal Kingdom is so good even pieces of furniture seem to contribute carefully nuanced performances. According to the bookies the chances of Jacki Weaver taking home the Oscar is very slim; about the same as Leslie Nielsen rising from the grave and winning Best Director for a WWII drama told with fart sounds instead of dialogue. Still, we’ll be rooting for Weaver. 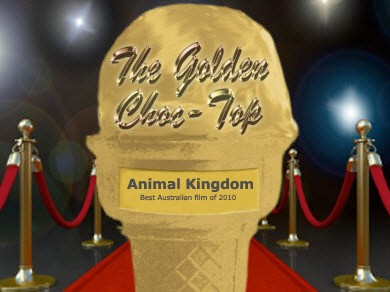 The Malcolm Tucker Award for Most Deplorable On Screen Personality

Malcolm Tucker, the foul-mouthed star of In the Loop and TV’s The Thick Of It, lives and breathes diabolical scumbaggery and the winner of the annual Golden Choc-Top attributed with his prestigious name requires nothing short of inhumane bastardy.

A bunch of veteran villains returned in 2010 to play it again, Sam and contend for the title — most notably Gordon Gekko (Michael Douglas) in Wall Street: Money Never Sleeps and Freddy one-two-coming-for-you Krueger (now played by Jackie Earle Haley) in Samuel Bayer’s patchy remake of A Nightmare on Elm Street.

There were newcomers, too: Mickey Rourke slashed apart cars and buildings in Iron Man 2, Jesse Eisenberg breathed bitchy life into Mark Zuckerberg in The Social Network, Sam Neil drank blood like wine as a corporate fang-toothed baddie in Daybreakers and the train in Unstoppable — Tony Scott’s action movie about, well, an unstoppable train — was also admirably diabolical.

But the Malcolm Tucker Award for Most Deplorable On Screen Personality goes to Casey Affleck for his creepy stony-eyed performance as a cool-headed Texan serial killer in Michael Winterbottom’s The Killer Inside Me. Lou Ford (Affleck) is the kind of emotionally fickle sicko who can brutally murder a person one moment then sit down to enjoy a round of cartoons and chicken wings the next.

The story tracks Ford’s romance with two women: his long term partner Amy (Kate Hudson) and his adulteress Joyce (Jessica Alba), an emotionally vulnerable prostitute. One day Ford brutally kills Joyce for no discernible reason and continues on a “why not?” trail of murders, ratcheting up the body count as if he were a participant in some deranged alternative version of Who Dares Wins.

Take a bow, Casey — but please don’t come into the office to collect your award. 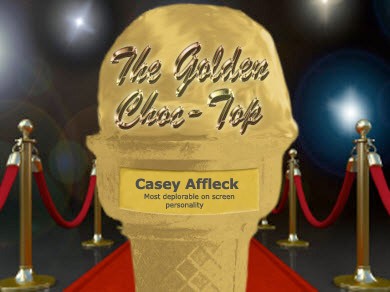 A night of shifty women and dirty rats

I thought Casey Affleck’s performance was great, but I wasn’t particularly taken with THE KILLER INSIDE ME. ANI

I thought Casey Affleck’s performance was great, but I wasn’t particularly taken with THE KILLER INSIDE ME.

No disagreements with Animal Kingdom as the best Oz film. (By the length of the straight.)
But as for the Malcolm Tucker….. While Casey Affleck was bad.
For sheer, on-screen awfulness, I was far more scared of Barbara Hershey, in her role as Natalie Portman’s mother in Black Swan.

Nice one, Paddy – she was definitely very creepy. But one of the questions the film ultimately asks is: who is creepier? The mum, or the daughter?