Some survey figures on racism

The re-release of information from a decade long study by academics at the University of Western Sydney on Australian attitudes and their immigration is interesting.

Some survey figures on racism. Having written a couple of times recently (here and here) about being unable to find any opinion poll evidence of the extent of Australian attitudes and their immigration the re-release of information from a decade long study by academics at the University of Western Sydney is naturally of interest.

I will write more extensively about the survey on Crikey’s The Stump blog later but these tables taken from earlier publications by the “Challenging Racism: The Anti-Racism Research Project” give some of the flavour: 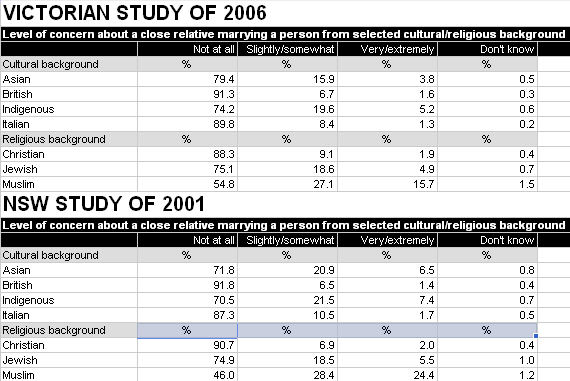 The costliest quake of the year? Yesterday’s New Zealand earthquake is shaping up as the biggest earthquake loss of the last year for the world’s insurance companies. Last September’s quake, in which miraculously no lives were lost, produced an insured loss of US$5000 million, not far behind the US$8000 insured loss from last February’s quake in Chile.

In Haiti, where 222,570 people lost there lives back in January 2010, most of the damaged buildings were uninsured. The latest NZ disaster, occurring this time so close to a major city, appears to have caused more damage than the last one.

Munich RE lists the following events as what it calls great natural catastrophes since 1950: 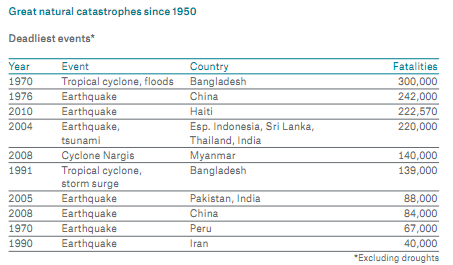 A solo voice of principle. Mark Webber comes as close as there is in Formula One motor racing to believing there are principles other than the almighty dollar relevant to his sport. It appears that he alone had the courage to suggest outright that revving cars around the streets of Bahrain was the wrong thing to consider when the people were demonstrating in the name of democracy throughout the city state.

“When you hear of people losing their lives, this is a tragedy,” the boy from Queanbeyan said last Sunday.

“It’s probably not the best time to go there for a sporting event. They have bigger things, bigger priorities.”

For the boss of F1, Bernie Ecclestone, team owners and other drivers, silence was deemed the best policy lest they upset the crown prince, sheikh Salman ibn Hamad ibn Isa Al Khalifa, who provides the millions of dollars they hoped to compete for.

Mr Ecclestone left it to the prince to make the decision finally to call the race off. No doubt he hopes that the demonstrators will be gone later in the year with some of the millions still being available to line his pockets.

Will Morocco be next? The pollster suggests so. Among the many international surveys that the US based pollster Gallup makes is a measure of what it describes as a “well-being” index that classifies respondents worldwide as “thriving,” “suffering,” or “struggling” based on how they rate their current and future lives.

The index rates the views of people on what is called the Cantril Self-Anchoring Striving ladder scale, with steps numbered from 0 to 10. It is a little complex but suffice to say that the global wellbeing metrics make clear that rising GDP is not enough on its own to produce satisfaction among all the people. The gains need to be shared.

At the beginning of this month Gallup noted the declining percentage of those in Egypt and Tunisia who rated their lives well enough to be considered thriving It said this reveals that these populations, as a whole, have become increasingly negative about their lives over the past few years:

In Egypt, all income groups have seen wellbeing decline significantly since 2005, with only the richest 20% of the population trending positively since 2009. In Tunisia, wellbeing for all groups has declined since 2008 at similar rates.

As a result of these declines, wellbeing in these countries now ranks among the worst in the Middle East and North Africa region, on par with Libya, Palestinian Territories, Iraq, Yemen, and Morocco. When more people were thriving in Egypt and Tunisia in past years, their wellbeing ranked toward the higher end for the region. Thus, it is important to consider the current state of wellbeing in each country as well as the trend and trajectory. 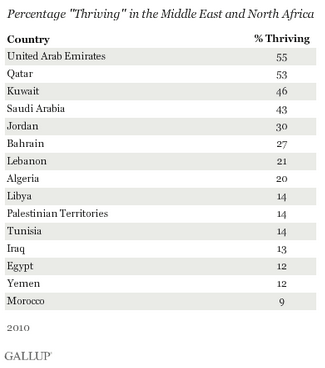 On the Gallup website there are graphs showing how wellbeing decreased in Egypt and Tunisia while GDP increased, leading to the pollster’s conclusion that “leaders cannot assume that the lives of those in their countries would improve in tandem with rising GDP. The traditional GDP gains seen in Tunisia and Egypt alongside declines in wellbeing and subsequent political instability are evidence of this. Together, the data strongly suggest leaders need to follow much more than GDP to effectively track and lead the progress of their nation.”

Subsequent developments in Libya, Yemen and Bahrain, and now Morocco, suggest that this pollster might just have got it right.

The Perpetrators: how the media ‘hunts down’ their ‘talent’

At Qantas, the first cuts won’t be the deepest

Research funding cuts: scientists should be making a noise