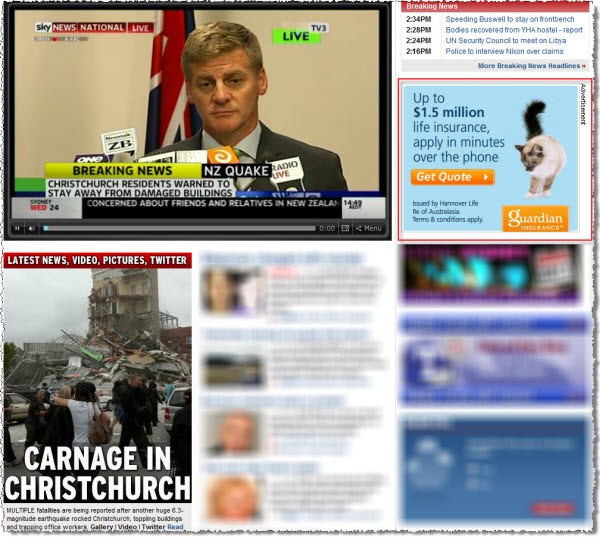 NT News watch. Only a devasting natural disaster in Christchurch could keep not one, but two, crocodile stories from dominating the front page of today’s NT News: 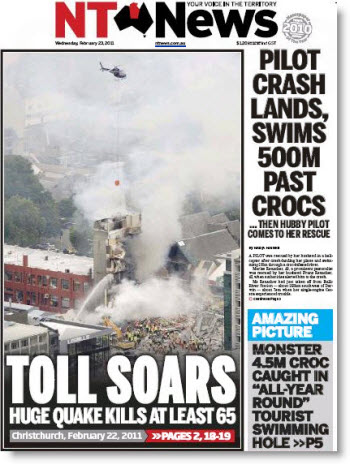 “Over the past few weeks, much has been made of the power of Al Jazeera, the Qatari news channel launched 15 years ago by the Gulf Arab state’s Emir Sheikh Hamad bin Khalifa al-Thani with the goal of providing the sort of independent news that the region’s state-run broadcasters had long ignored.” — Reuters

Footage of JFK’s last night made public after 47 years

“The night before his assassination, President John F. Kennedy attended an event for the League of United Latin American Citizens in Austin. Roy Botello took a silent film of him and his wife, Jackie, arriving at the event. After sitting in a drawer for 47 years, the footage is now on the internet.” — Gawker

Phone hacking: News of the World editors meet the Met

“From 2006, meetings took place between senior Met police officers and NoW editors despite the on-going phone-hacking investigation.” — The Guardian

“The chief executive of regional pay-TV group Austar, John Porter, played a straight bat when asked about recent reports that Foxtel shareholders were weighing up the merits of a takeover bid.” — The Australian

“Australia’s frat-boy comedy duo Hamish Blake and Andy Lee will graduate to the entertainment big league, with the pair set to announce a multi-million-dollar deal with Channel 9 this Friday.” — The Daily Telegraph