Scott Morrison shoots all the way up to third -- shoot as in foot.

Scott Morrison shoots all the way up to third — shoot as in foot.

Morrison primarily made it to third on the basis of comments even he now agrees were “insensitive”, but the wider issue of asylum seekers has resurfaced major ideological divisions within the Liberal Party that have only been kept out of sight until now by firstly avoiding being thumped at the polls (most moderates have marginal seats) and then by the prospect of an unexpected return to the right side of the House

Andrew Wilkie and Bob Brown the other main movers as the PM continued to try and manoeuvre the flood levy through both houses of Parliament — she got those two over the line, but the other person to move into the top ten, Nick Xenophon, is playing hardball while he still can.

Meanwhile in NSW, Kristina Keneally is doing well to be getting the same amount of coverage as Barry O’Farrell, as most State political journos start to focus on who will get what job in the O’Farrell ministry and try to tie Barry down to specifics on … well anything would do. 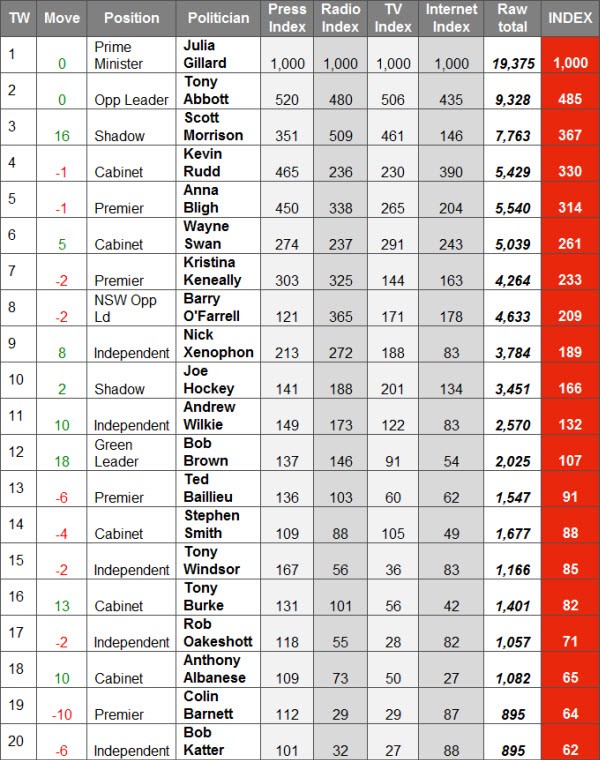 Not as much interest in asylum seekers on talkback as most of the media would like you to believe.

I’ve just added another item to the numbers. I wish I hadn’t.

Did 60 Minutes break the law in revealing girl?

Crikey says: the outrage the Herald Sun paid for