As an exercise in international futility it is hard to go past a meeting of the G20.

Wayne should save the air fares. As an exercise in international futility it is hard to go past a meeting of the G20. Consider these words of wisdom discussing how to measure global economic imbalances produced after an all night session at the weekend meeting of the group in Paris:

I would love to hear our chief delegate, Treasurer Wayne Swan, explain what those 54 words mean but I will settle for what Christine Lagarde, France’s finance minister, told reporters at the end of the meeting:

Have you got that clear now? Then have a go at deciphering these bits of the official communique:

“The international monetary system (IMS) has proven resilient, but vulnerabilities remain, which raise the need to improve it in order to ensure systemic stability, promote orderly adjustment, and avoid disruptive fluctuations in capital flows, disorderly movements in exchange rates — including advanced economies with reserve currencies being vigilant against excess volatility — and persistent misalignement of exchange rates.

“Today we agreed on a work program aimed at strengthening the functioning of the IMS, including through coherent approaches and measures to deal with potentially destabilizing capital flows, among which macro-prudential measures, mindful of possible drawbacks; and management of global liquidity to strengthen our capacity to prevent and deal with shocks, including issues such as Financial Safety Nets and the role of the SDR.”

As best I can work out it means 19 countries and the representative of the European Union were unable to agree about virtually anything so real decisions have been put off until next time. But never fear for the communique tells us:

“We look forward to the completion by the next Leaders’ Summit of the following ongoing work on systemically important financial institutions as scheduled in the FSB work program for 2011: determination of Global-systemically important financial institutions by FSB and national authorities based on indicative criteria, a comprehensive multi-pronged framework with more intensive supervisory oversight; effective resolution capacity including in a cross-border context; higher loss absorbency measures through a menu of viable alternatives that may include, depending on national circumstances, capital surcharges, contingent capital and bail-in instruments; and other supplementary requirements as determined by the national authorities including systemic levies.”

Well, that’s that fixed then.

A salutary reminder. Perhaps this recent story from CNN is one that we should play every day to remind us why we should not believe what politicians tell us about war. 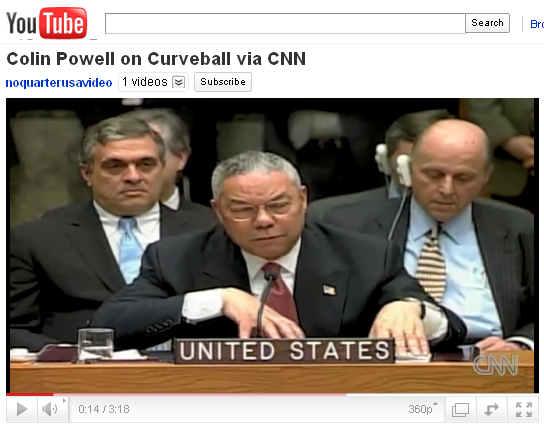 Or about peace really. In terms of political hypocrisy it will be hard to beat British Prime Minister David Cameron’s current effort. After hastily adding a visit to Cairo to a Middle East trade mission he is heading, Mr Cameron prepared a speech saying freedom and democracy are the best way to bring peace and prosperity to the embattled region.

With those fine words out of the way it is off to Kuwait and the Gulf States with a group of UK arms dealers. 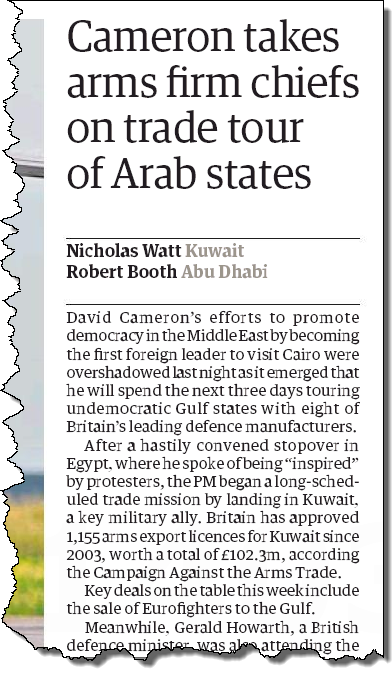 From page one of this morning’s Guardian

The marketing drive aimed at military and police buyers was backed by a 15-strong delegation from UKTI, the trade promotion wing of the department for business which is co-hosting a British pavilion with ADS, the UK arms trade association.

Oh, but don’t worry. Prime Minister Cameron is appalled that British guns might be being used to shoot demonstrators in Libya. He has even asked his officials to investigate whether any British-made weapons have been used in the “vicious repression”. If they are then the previous Labour Government would be to blame as a post on Crikey‘s blog The Stump illustrates.

A thought for the publishers of Andrew and Piers. The UK Government’s Chief Scientific Adviser Sir John Beddington is stepping up the war on pseudoscience with a call to his fellow government scientists to be “grossly intolerant” if science is being misused by religious or political groups.

In closing remarks to an annual conference of around 300 scientific civil servants on 3 February, in London, Sir John said that selective use of science ought to be treated in the same way as racism and homophobia.

“I really would urge you to be grossly intolerant … We should not tolerate what is potentially something that can seriously undermine our ability to address important problems.

“There are enough difficult and important problems out there without having to … deal with what is politically or morally or religiously motivated nonsense.”

Re: Wayne should save the airfares – it is really quite simple what the G20 are trying to achieve, Richard. How to fool all of the people all of the time into believing that they are putting new rules in place to prevent another GFC, when really they just want to maintain the status quo so their mates can use other people’s money to gamble with, collect their obscene bonuses and get bailed out by the little people (yet again!) when the next catastrophy occurs. As I said – simple!!

“Curveball” – considering that “Big Tailor Shoppe of Horrors”, “Cheney and Co” were running, could it have been less a case of “plausible”, and more a case of “little chance of being proved implausible or false”?