Day two of the Golden Choc-Tops, with awards today for The Most Intense Sweat-Drenched Ride to Nowhere (otherwise known as the Best Confined Space Thriller) and The Best Sequel of 2010. Who will win?

Presenting day two of Crikey‘s film awards, The Golden Choc-Tops, which will be rolled out every day this week in anticipation of next week’s Academy Awards. Yesterday, drugs and debauchery and the year’s most under-rated film. Today, the winners are…

The confined space or single setting thriller is nothing new. Ol’ spook master himself, Alfred Hitchock, helmed a couple of respectable rides to nowhere in Lifeboat (1944) and the brilliant Rope (1948). But these days Hollywood’s unerring penchant for wooing audiences with globetrotting settings and spectacular special effects has made the modest genre more appealing than ever.

There are two kinds of single setting thrillers: the “sort of” variety, in which much but not all of the running time is dedicated to one setting, and the “pure bred”, in which an entire film takes place in the same location. The latter can be appealing for skinflint filmmakers who could only afford one setting and had the nous to spin a lack of resources to their advantage; just ask director Vincenzo Natali, who made 1997’s cult Canadian thriller Cube, in which a bunch of confused characters woke up in a cube-shaped room for reasons almost completely unexplained.

James Franco can currently be seen in Australian cinemas in the “sort of” variety in director Danny Boyle’s 127 Hours, a dramatisation of the ill-fated adventures of American rock climber Aron Ralstron who found himself literally caught between a rock and a hard place while canyoning in Utah in 2003.

Last year saw the introduction of the cinematic “hellevator” in Devil, which riffed off the simple premise that five people are stuck in an elevator and one of them — gasp! — is the devil. It was billed as coming from the mind of producer M Night Shyamalan, which was a good start given Shyamalan’s shonky recent work (The Last Airbender, The Happening, Lady in the Water) seemed to come from a very different part of his body. There was also Samuel Moaz’s acclaimed “pure bred” single setting war pic Lebanon, a tense and twitchy film based entirely inside a tank in the 1982 Lebanon War.

But there was never any doubt which film would snag the Golden Choc-Top for The Most Intense Sweat-Drenched Ride to Nowhere. Ryan Reynolds, take a bow — if filming hasn’t buggered up your back. After all, Reynolds spent every second of Buried literally lying down on the job. This 93-minute journey to the extremities of cinematic claustrophobia from director Rodrigo Cortés could hardly be any more pure bred — it is based entirely in a coffin, which surely sets a record for the most confined space thriller of all time.

Reynolds plays Paul Conroy, a truck driver stationed in Iraq who is suitably aghast to wake up and discover himself buried alive. He has a zippo lighter, a mobile phone, and presumably a bad headache. Then the phone rings…

Mad props to Reynolds and Cortés for taking an arguably silly concept and shaping it into a classy piece of work. Buried is a tense and sweaty ride, even if the roller coaster carriage goes — at least geographically speaking — absolutely nowhere. 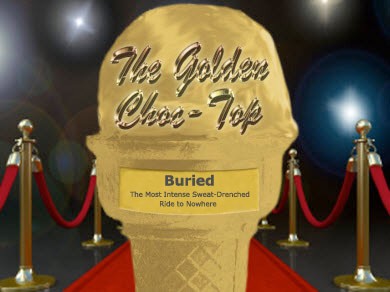 Another year, another never-ending slew of sequels. Hollywood’s undying affection for unoriginal ideas is well known and not without merit, at least from a business point of view. Of the 10 highest-grossing films released last year in Australian cinemas all were from Hollywood, six were sequels and two were remakes, leaving only Christopher Nolan’s Inception and James Cameron’s Avatar as “original” movies (though many critics would understandably take umbridge at that label being applied, especially to the later).

After a more than two decade sabbatical Gordon “greed is good” and “lunch is for wimps” Gekko returned in 2010 to scam the corporate world in Oliver Stone’s Wall Street: Money Never Sleeps. It wasn’t however greed that motivated Stone to bring Gekko back but a desire to produce commentary, in his typically unsubtle style, on the Global Financial Crisis. Stone’s motivation was sound but the movie was dull and soporific, leaving critics the tantalising prospect of playing with its title (ie: Money Doesn’t Sleep: But You Will).

It wasn’t the worst of last year’s sequels, though. Shrek Forever After, Sex and the City 2, Cats and Dogs 2, Paranormal Activity 2 and Little Fockers didn’t exactly install new faith in the art of sequel-making. Nor in Australia: Nick Giannopoulous and his awful, awful brand of “look at me I’m Greek but also I’m Aussie, mmaatteee” humour returned to whack audiences with his patented wog shtick in the limp and laugh-less The Wog Boy 2: The Kings of Mykonos, which deserves to be tossed in the waste bucket of popular culture like the last scraps from a Saturday night souvlaki run.

But last year one sequel was so good — so funny, sophisticated, sweet and emotionally engaging — that it came very close to making up for all the dodgy ones. It’s a film about inanimate objects that come to life when nobody’s watching — and no, it’s not Gnomeo & Juliet.

The Golden Choc-Top for The Best Sequel of 2010 goes hands-down to Toy Story 3. There’s good reasons why Pixar’s second sequel to the movie that kicked off the studio’s string of family-friendly hits has generated stories the world over about grown men being reduced to blubbering wrecks. These days audiences have come to expect eye boggling animation, but not such a rich emotional core, and this is where director Lee Unkich’s story about Woody, Buzz Lightyear and the gang succeeds triumphantly. Toy Story 3 isn’t just the best sequel of 2010, it was also one of the best movies of the year. 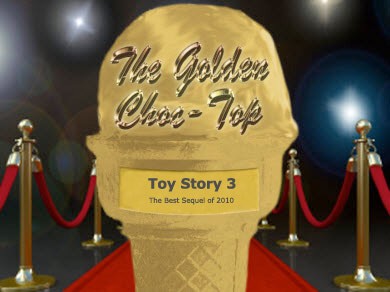 sorry but this feature is a waste of effing space

Would those nasty people in the black suits who are making BAAL read this article please cease and desist.

Now that was a good film (Men in Black)

I used to worship you, Baal, but no more!

Sorry about that. All I can say is put not your trust in false gods!