Why the <em>NT News</em> rules … the Murdoch in waiting …

In today's Media Briefs: Why the NT News rules #453 ... the Murdoch in waiting ... What should YouTube do about graphic self-harm videos? ... Bad book review ignites libel suit and more.... 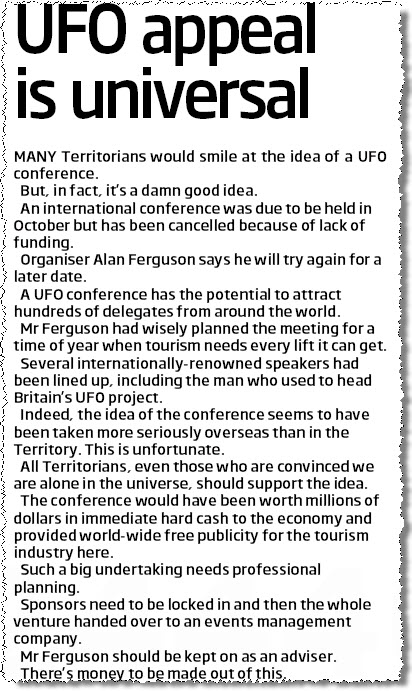 And NT News readers agree. With one comparing the UFO conference to the Sydney Gay and Lesbian Mardi Gras…

The Murdoch in waiting

“The perennial speculation is whether James Murdoch, 38, will one day run the News Corporation. But the pertinent fact is that as the chairman and chief executive of its businesses in Europe and Asia, he already runs a large and growing part of it.” — New York Times

“YouTube videos on cutting and other self-injury methods are an alarming new trend, attract millions of hits and could serve as a how-to for troubled viewers, a study warns.” — Salon

“After booting up an iPhone app, an officer would train the phone’s camera on the crowd. The suspect’s position, after he had been tracked by covert police, would be highlighted by an icon overlaid on the image. Similarly, other icons could pinpoint the positions and range of other officers, including those operating undercover.” — New Scientist

Elisabeth to join board of News Corp after £415m buyout

“Elisabeth Murdoch will join the board of her father’s News Corporation and avoid reporting directly to her brother James after News completes the £415m buyout of her Shine Television group.” — The Guardian

“A French academic living in Israel is suing two men for libel because they trashed her book, The Trial Proceedings of the International Criminal Court, in a review. Is saying something sucked libelous, or even criminal?” — Gawker

I think anybody should exercise caution in holding a UFO conference. It might result in a local shortage of tin foil.