This just in from Muammar Gaddafi. Live on state TV, in what amounted to only a few seconds of footage.

This just in from Muammar Gaddafi. Live on state TV, in what amounted to only a few seconds of footage.

In response to the mounting opposition to his 40 year rule, and rumours that he’d left the country, he said: “I am in Tripoli and not in Venezuela,” according to a BBC translation.

He was carrying an umbrella and appeared to be sitting in the back of a car wearing a hat with ear flaps. 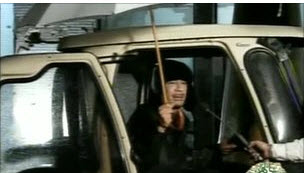 Earlier, the new General Committee for Defence said its forces would cleanse Libya of anti-government elements. A statement described the protesters as “terrorist gangs made up mostly of misguided youths” who had been exploited and fed “hallucinogenic pills” by people following foreign agendas.

As the outside world continues to try to sift between fact and fiction, a story about two fighter pilots who have defected to Malta is crystallising. The pilots tell Al Jazeera they came so close to carrying out their mission — to bomb anti-Gadaffi demonstrators — that they could see the crowds on the ground. Instead, they turned around and chose to dump their bombs into the sea.

According to The Guardian, the Mirage fighters are among the most prized in Libya’s fighter plane force.

The pilots have  reportedly passed on “classified” information about the movements and actions of the Libyan military to Malta.

We respectfully suggest that umbrella’s not going to cut it.

Mirages? Can you still get spares for them?

Meski – they’re Mirage F1’s, not the Mirage 3’s the RAAF had. They’re a later model.

Good on the air force pilots – I hope they’re the first of many.

Would he really be dressed like that in Tripoli?