Reformed ALP member turned political reformist. Former ALP member Jon Shapiro is running as an independent in the NSW seat of Balmain, solely on the issue of constitutional reform. His material makes it clear his frustrations with internal ALP policy development predate the Bracks/Carr/Faulkner report, and on the basis of his vision I’d hazard a guess […]

Reformed ALP member turned political reformist. Former ALP member Jon Shapiro is running as an independent in the NSW seat of Balmain, solely on the issue of constitutional reform. His material makes it clear his frustrations with internal ALP policy development predate the Bracks/Carr/Faulkner report, and on the basis of his vision I’d hazard a guess he’s not going to take up the invitation to return to the party…

The fine public/private line at St Vincent’s. It is interesting that St Vincent’s Private Hospital in Sydney is opening a state-wide mental health unit for people between the ages of 16 to 30. This unit is attached to the new unit at the public hospital and was therefore paid by public money. St Vincent’s Private Hospital will now profit from public money. The question is will staff support be provided from the public mental health unit and will psychiatrists in the public hospital have admission rights? This will be a conflict of interest because they are using a public-funded position to earn money through private patients.

Is it a bird? Is it a plane? No, it’s art. Perth International Arts Festival commissioned a piece of artwork in the order of a few hundred thousand dollars and it blew away after less than a day in place. Called Cloud City by Tomas Saraceno, it is … I mean, was … a contemporary piece commenting on how civilisation could leave a lighter footprint on the planet — namely, by floating above it. Too bad the artwork had other ideas and broke free of its harnesses with a bit of help from a “strong Easterly”. 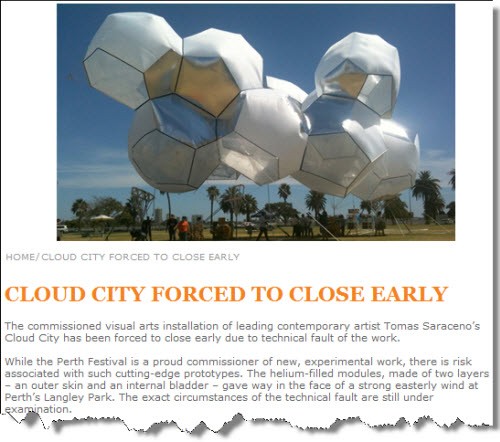 It was rather poetic as it floated casually past the Perth skyline and a few hundred perplexed concert-goers on the Esplanade. Rumours abound that air traffic was shut down while authorities could shoot down the helium-filled bladders, which I can’t help but picture emptying their contents all over Perth’s western suburbs with the deflated remains landing in Gina or Twiggy’s front yards. I guess whoever commissioned the piece thought that art conquers all, including Perth’s weather — we’re often quoted as the windiest city on the planet after Chicago. Also, ABC TV’s Art Nation was due to run a story next Sunday.

Nanny state goes after angry nanna. Can someone explain to me why I as a 50-year-old with super, death and disability insurance, no debts, a $20,000 deposit and a combined income with my partner of $75,000 am I denied a home loan of $200,000 because I am 50? The so-called credit protection legislation which came into effect on January 1 now has us as home buyers totally excluded from being home owners. Suncorp and QBE refused us on the basis that hardship may occur in 17 years time when and if I retire. How they can you base a figure 17 years ahead? My calculations suggest with increased wages and profit from the sale of home and a time when we’d be wanting a smaller abode we’d be quite comfortable.

Now the nanny state will have us as non-home owners and having to pay in rent actually more than we’d be paying off on a mortgage! Someone’s head needs to be a on a plate for this. We didn’t even know about this legislation when we sold our first home last year. Our brokers told us the banks are just sh-t scared and confused with the new legislation and that is why they can’t make a reasonable decision based on current circumstances and not some extrapolation many years ahead based on a figure they have plucked from their a-se.