The Golden Choc-Tops: drugs and debauchery, and the most under-rated film of 2010

Today we present the first two gongs in Crikey’s inaugural Golden Choc-Top awards: The Charlie Sheen Award for Most Spectacular Cinematic Display of Drugs and Debauchery and The Most Under-Rated Film of 2010.

Brush your hair, powder your nose and slip on your finest outfit because it’s time once again to walk the cyber red carpet for Crikey’s annual Golden Choc-Top film awards. As the anticipation hots up around next Monday’s Oscars, today we present the first two gongs.

Cocaine, dope, prostitutes and spontaneous bursts of public rowdiness. Raindrops on roses and whiskers on kittens, these are a few of Charlie Sheen’s favourite things.

Channeling the gonzo spirit of Hunter S Thompson in 1998’s Fear and Loathing in Las Vegas, Johnny Depp set the benchmark for outrageous cinematic displays of drugs and debauchery, and it’s hard to imagine anyone ever seizing the mantle — but in 2010 British actor Andy Serkis came admirably close.

The title Sex & Drugs & Rock & Roll was always going to be a tough one to live up to, but director Mat Whitecross’ gripping biopic of singer and lyricist Ian Dury does so with gut-busting panache. Sadly the film is yet to receive a theatrical release in Australia, but now with a Golden Choc-Top to its name its chances of arriving on the indie circuit are looking rosier.

The 2011 CSAMSDDD Golden Choc-Top goes to Serkis, the most widely seen “invisible” actor in modern history. He is most famous for disappearing under skins of digital rendering and emerging — hissing, growling, beating his chest — as iconic characters such as Gollum and King Kong. But if you thought he needed CGI implants to get his performances across you line you were way off: Serkis’s impersonation of the brash, party going, drug-addled Dury is breathtaking. It is a finely nuanced portrayal of a man with deep internal conflicts and a sensitive soul that lingers somewhere underneath the soiled bed sheets and streak-marked undies.

Serkis’s mesmerising performance ranks as one of the best of last year, or any year. It produces one of those rare and unforgettable characters that are etched like knife wounds into the psyche. You’ll remember that awkward hobble (Dury had polio), those bleary wild eyes, that bull-headed spirit, that insatiable appetite for drugs and cheap thrills. 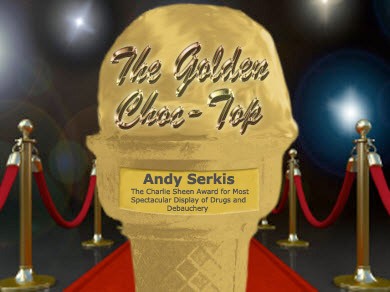 Last year portly star Kevin James’s family-friendly comedy Paul Blart: Mall Cop snagged a runners up Golden Choc-Top (the confusingly titled Silver-Golden Choc Top) for the most under-rated film of 2010. This year another all-ages venture has managed to go the distance and take the top gong. But first, the narrow misses.

Bathed in a neon mise en scene crammed to the hilt with in-yer-face special effects and tied together with a plotline that lurches between video game sci-fi and a syrupy father/son emotional subplot, the sort-of remake/sort-of sequel Tron: Legacy was always going to provide something for the critics to grouse about.

Few reviewers bothered to point out, however, that the film’s midnight at Akihabara look is extraordinarily bold for a blockbuster. Never has the use of 3D technology — which kicks in when Sam Flynn (Garrett Hedlund) enters “the grid” — been more justified in a narrative context. Robert Rodriguez’s gloriously pulpy grindhouse throwback Machete was also widely overlooked.

But the winner of the 2011 Golden Choc-Top for Most Under-Rated flick has a big head — though not because of this award. Megamind (voice of Will Ferrell) is the bulbous blue-skinned protagonist of Dreamworks’ fiendishly clever post-mod superhero story of the same name. Like Superman, Megamind was put in a pod and hurtled away from a collapsing planet onto Earth. Unlike Superman, he monumentally fails at everything he endeavours and finds his true calling as a baddie.

The marketing materials suggested a feather-brained, merchandise-friendly storyline, but don’t be fooled. It’s easy to underestimate the shrewdness of Alan J. Schoolcraft and Brent Simons’ screenplay, which constantly plays with the parameters that distinguish “hero” and “villain” and never cheats the central idea that Megamind is a selfish twerp. Every character is tinted with a sense of sorrow and sadness, which gives the movie entirely unexpected psychological substance. 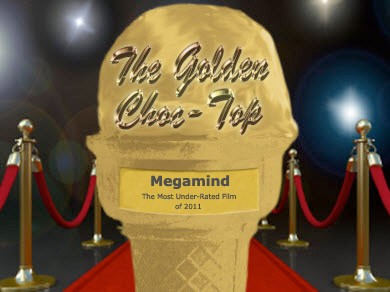 I don’t care about typos, it made me giggle! I know Serkis from somewhere, but I can’t pick where. I think he may be one of those ‘everwhere’ actors…

Dear Mr Backmeister -see, you don’t like it when someone spells your name the wrong way. Please learn to spell.
Andy Serkis, Will Ferrell – I suppose these are the blokes you mean. Who’s Will Farrell? And Andy Sorkis?
Is getting the names right really so hard? One more for you – it’s Robert Rodriguez.

Luke, Choc Tops is the name of the Tony Chu-convened weekly meetings of NAFA (of which I am a member), a networking group of film-makers and actors that also works as a film production company. I wish you’d used a different name for your award.

I’ve read this a few times now and I still can’t find the name of the film Andy Serkis/Sorkis starred as Ian Dury….. shall I guess? I’d suggest this is an important detail to add to your piece.