Anti-government protests in Libya have moved from the second city of Benghazi to the capital Tripoli, as Colonel Muammar Gaddafi cracks down on unrest that threatens to unseat him from his 40-year reign as ruler.

Anti-government protests in Libya have moved from the second city of Benghazi to the capital Tripoli, as Muammar Gaddafi cracks down on unrest that threatens to unseat him from his 42-year reign as ruler.

Al Jazeera is reporting “disturbances” in Tripoli, while protests have also reportedly broken out in other cities, including Bayda, Derna, Tobruk and Misrata — where anti-Gaddafi graffiti adorns the walls.

According to advocacy group Human Rights Watch, at least 173 had been killed since the uprising began. But eyewitness reports from people in Benghazi hospitals say that as many as 200 had been killed and more than 800 wounded there on Saturday alone. According to human rights activist Sarah Abdallah, the death toll could be higher:

“The death toll keeps rising in #Libya. At least 500 Libyans are estimated to have been murdered by #Gaddafi since the uprising began. #Feb17“

The violence is being fuelled by security forces using weapons such as knives and machine-guns. Government snipers were also active, according to reports. In a phone interview with The Guardian, a Libyan student has described the situation and the sounds of helicopters gunshots and screaming.

Seif el Islam Gaddafi, the son of Muammar, warned in a state television address early this morning that continued anti-government protests could lead to a civil war. He also admitted that people had died in the uprising and that he and his father would “fight to the last minute, until the last bullet”.

“Libya is not Tunisia and Egypt. Libya has oil — that has united the whole of Libya.” 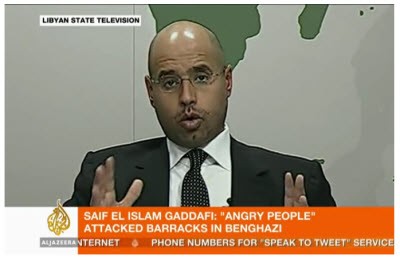 In attempt to appease the protesters’ demands, the younger Gaddafi also promised reforms for the African nation:

“We will call for new media laws, civil rights, lift the stupid punishments, we will have a constitution … We will tomorrow create a new Libya. We can agree on a new national anthem, new flag, new Libya. Or be prepared for civil war. Forget about oil.

This picture from the streets shows Libyans holding their shoes in the air while watching Seif Gaddafi’s address (via @ammr):

Meanwhile, rumors that Gaddafi had fled to Venezuela were refuted on Twitter by Al Jazeera Latin American correspondent Dima Khatib”

“I spoke to Venezuelan officials myself, got official denial of news that Gaddafi is on his way to Caracas. Not true ! #libya #feb17“

International condemnation of the violence in Libya has also begun, with the US urging reform in the oil-rich nation. Al Jazeera has also reported that the Libyan ambassador to China resigned earlier this evening during an interview live on air. BBC Arabic is also reporting that the Libyan ambassador to India has also resigned from his post in protest at the violence being used to suppress the protests at home.

Britain’s close allegiance with Libya has also come under the spotlight. In 2004 former Prime Minister Tony Blair announced a close relationship with Gaddafi’s regime, praising his willingness to join the “common cause with us against al-Qaeda, extremists and terrorism”.

The Telegraph are reporting that Louis Susman, the US ambassador to London, suggested that these efforts had only served to give Gaddafi’s regime grater legitimacy.

As with other protests in Tunisia and Egypt, much of the Libyan unrest has largely been co-ordinated by social network service such as Twitter and Facebook. According to AFP, internet services were cut off in Libya on Friday as the regime evidently moved to strip anti-government protesters of ways to organise and communicate. This video uploaded to YouTube shows protesters outside a mosque in Benghazi: 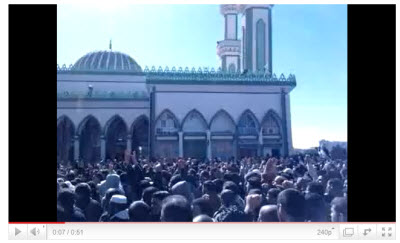 The Libyan Youth Movement have been using Facebook to spread pictures of the protest, the shot below is from a gathering in Benghazi:

While this shot shows the revolutionary flag of independence being raised in Benghazi.

Too much to hope, I suppose, that the violence in Libya will end the self-serving and totally useless career of Tony Blair as an international ‘crisis’ commissioner and overpaid speech giver?

Yes, too much to hope, I think.