Worst front page ever? … correction of the week … too-dear journalism …

In today's Media Briefs: Who falls next in the Borders aftermath? ... Is pure journalism unaffordable? ... Magazines pick up, newspapers struggle. ... Newspapers respond to Google One Pass

Is this the worst front page in the history of Australian newspapers? This morning, beleaguered Gold Coast Bulletin editor Dean Gould decided to follow in the footsteps of fictional UK newspaper The Herald in legendary miniseries State of Play by leaving the front page blank, save for a breakout box of Mayor Ron Clarke’s head. The issue, as far as we can tell, was something about increased water rates, a far cry from the Herald‘s oil industry corruption implicating the highest levels of the UK government. 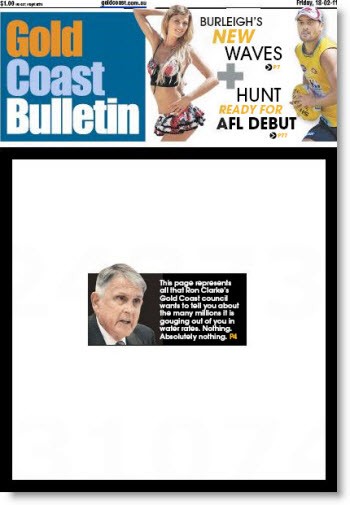 Gould, who recently oversaw a record 11.85% Monday-Saturday circulation decline, is scrambling to save his skin before a last ditch strategy presentation next Friday at News Limited’s Holt Street headquarters. The Saturday figures were especially disappointing, plunging under the crucial 60,000 barrier for the first time in years, and John Hartigan is believed to be keen to lasso other News up-and-comers into the role, as previously canvassed by Crikey. — Andrew Crook

Correction of the week. Goodbye and welcome back Lee Lin Chin. From the Letters to the Editor in Monday’s Courier Mail:

And then today’s Courier Mail: 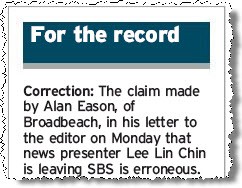 “Companies have long paid for overseas journalists’ travel and other expenses. It’s a somewhat standard practice that I hear is creeping to our shores. Several technology firms have told me bloggers are often paid to attend events. This is becoming routine.” — Forbes

“Reader numbers for magazines have improved, but newspapers remained under a cloud last year, according to the latest Roy Morgan readership survey, released yesterday.” — The Australian

“Facebook has added two new relationship status options users can include in their online profiles: “in a civil union” and “in a domestic partnership.” The new fields are being rolled out in the U.S. and several other countries, including Canada, France, the U.K., and Australia, starting today.” — Huffington Post

Newspapers begin erecting paywalls in response to Google One Pass

“This weekend, Rep. Ron Paul won the straw poll at this year’s CPAC the second consecutive year. However, when he was interviewed about victory during America’s Newsroom on Fox News, yesterday, they aired the clip of his announced win in 2010 in which there is a significantly higher amount of booing from the crowd. Fox News tells Mediaite that this was a mistake and that they will be issuing an correction on America’s Newsroom tomorrow morning.” — Mediaite

Beware of the Other — a virus that is everywhere, and when it suits, everyone

More stimulus is on its way

Closing Tasmania is actually un-Australian. But what would you do?

Another reason for the front page of the Gold Coast Bulletin being bad, and one that Crikey didn’t think worth commenting on, is that the woman on the top left is pure sexual object, while the guy on the right, though some may find him cute, is actually doing something. While this kind of discrepancy, and the routine misogyny behind it, happens all the time in the media, the two pictures being the same size and placed side by side dramatises it in a way you don’t see often.

Sick of the crap

what a load of drivel. Peter Gleeson’s moles in the Gold Coast Bulletin newsroom, all of whom have their own paranoid agendas, are, as usual, feeding you crap. the front page was a perfect summary of the situation surrounding the battle going on with water charges on the Coast — quite possibly the most divisive local politics yarn to come along in an age. Important story, best front page in a long time. One of these days Andrew, you’re gonna figure out you’re being played. oh, and by the way, the bigwigs are coming to the Bulletin, not the other way round. you can’t even get that fact right. Pathetic.