Ignoring what the people think

My own observations and conversations suggest the anti-Muslim sentiment is both strong and growing.

Ignoring what the people think. If the Liberal Party’s Scott Morrison raised in a meeting of the Opposition’s shadow Cabinet that there are growing concerns among the Australian public about Muslim immigration, Muslims who are already in the country, and their ”inability” to integrate, I expect he would have been doing no more than telling the truth.

As I wrote yesterday in Crikey, when I went searching for data from proper opinion polls about attitudes to Muslims and their immigration I could not find any but my own observations and conversations suggest the anti-Muslim sentiment is both strong and growing.

My guess is that the recent remarks in the United Kingdom by Baroness Warsi, co-chairman of the Tory Party, are as applicable here as there.

The BBC reported her views thus:

Prejudice against Muslims has “passed the dinner-table test” and become socially acceptable in the UK, a senior Conservative is to say.

Baroness Warsi, co-chairman of the Tory Party, will warn against dividing Muslims into moderates and extremists.

The baroness, the first Muslim woman to serve in the cabinet, will say such labels fuel misunderstanding.

She will use a speech at Leicester University to accuse the media of superficial discussion of Islam.

Baroness Warsi will say anti-Muslim prejudice is now seen by many Britons as normal and uncontroversial, and she will use her position to fight an “ongoing battle against bigotry”.

To “battle again bigotry” it is first necessary to accept that it exists and when politicians are too scared to follow the example of Baroness Warsi and openly talk about the subject that will not happen.

It is a pity that Mr Morrison, who yesterday described a report that he thought the Opposition should try and capitalise on the growing anti-Muslim sentiment as being gossip that did not represent his views, did not come out and reveal what he did say and the context in which he said it.

The things we don’t like in our neighbourhood. Other drivers — noisy and dangerous ones — are the social disorders that annoy Australians  most.

In its latest survey of crime victimisation, the Australian Bureau of Statistics asked people their perceptions and opinions about social disorder problems including antisocial behaviour which may or may not be criminal offences such as public drunkenness, noisy neighbours and offensive language or behaviour — in their local area.

The Bureau found that overall, approximately 61% of people aged 18 years and over perceived that their local area had at least one social disorder issue. Of all the states and territories, the Northern Territory (28%) and Western Australia (32%) had the lowest percentage of people reporting no social disorder concerns.

Noisy driving was the most commonly reported type of social disorder in Australia, with an estimated 6 million people (36%) stating it was an issue in their local area, closely followed by dangerous driving (5.8 million people, 35%). 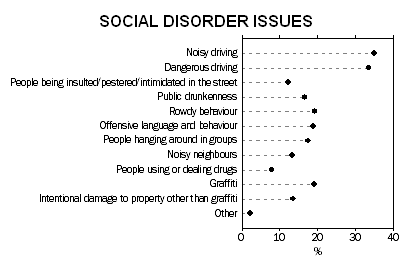 Respondents were asked whether the social disorder issues they identified as a problem in their local area were large, moderate or small problems. Approximately one-third of people indicated at least one of the problems was large.

While the use or dealing of drugs in the local area was the least commonly reported of the specified social disorder issues (8.1%), 32% of these people believed it to be a large problem.

Escaping this time. Planet earth, it seems, has largely escaped today from a wave of charged plasma particles from a huge solar eruption on the sun. NASA scientists say the wave has glanced off the Earth’s northern pole, lighting up auroras and disrupting some radio communications while escaping a widespread geomagnetic storm.

Not that we should get complacent. Richard Fisher, head of NASA’s Heliophysics Division, warned recently that the sun is waking up from a deep slumber, and in the next few years we can expect to see much higher levels of solar activity.

“At the same time, our technological society has developed an unprecedented sensitivity to solar storms. The intersection of these two issues is what we’re getting together to discuss.”

The National Academy of Sciences framed the problem two years ago in a landmark report entitled “Severe Space Weather Events—Societal and Economic Impacts.” It noted how people of the 21st-century rely on high-tech systems for the basics of daily life. Smart power grids, GPS navigation, air travel, financial services and emergency radio communications can all be knocked out by intense solar activity. A century-class solar storm, the Academy warned, could cause twenty times more economic damage than Hurricane Katrina.
Much of the damage can be mitigated if managers know a storm is coming. Putting satellites in ‘safe mode’ and disconnecting transformers can protect these assets from damaging electrical surges. Preventative action, however, requires accurate forecasting—a job that has been assigned to NOAA.

How cultural blindspots and a lack of diversity undermined pandemic response

Richard Farmer could talk to Andrew Markus of Monash University who maps attitudes to immigration in his Social Cohesion surveys.

One (and there are many, mostly ill-founded) of the reasons for anti-Muslim attitudes is the conflation of boat arrivals = Muslims = terrrorists. In fact a number of Iraqi arrivals are Christian, don’t know what proportion, and the Sri Lankan arrivals mayhave some Muslims but mostly not. Not that this should matter. But while boat arrivals (= Muslims) are demonised this is going to rebound on the Muslim community in Australia.

This brings up the broader issue of the next scapegoat. Now with the growing unacceptability of gay prejudices over the “dinner-table” someone had to be moved in from central casting to be our civilisations enemy. The facts do not matter to people who believe, there is no nuance to the view of “muslims”.

I agree with that Sparky, our culture dictates that for there to be a ‘normal’ there must be an ‘abnormal’ – and so it goes that one or another group of society must fill this void.

I commend Baroness Warsi. Having read her words, it is so plain now that trying to do the right thing by saying ‘Muslims arent terrorists, Muslim extremists are’ has in effect only worked to normalise the existence of anti-Muslim sentiment.