Melbourne news, live from Sydney. The camera soared over the Sydney Harbour Bridge and Opera House at the opening of Nine News in Melbourne last night. And was that Sydney newsreader Peter Overton piped in? Seems network control mixed up the feeds. Thankfully, Melbourne talking head Peter Hitchener found his voice… 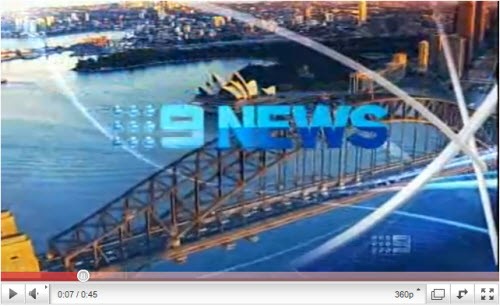 “On Friday, Feb. 11, the day Egyptian President Hosni Mubarak stepped down, CBS chief foreign correspondent Lara Logan was covering the jubilation in Tahrir Square for a 60 Minutes story when she and her team and their security were surrounded by a dangerous element amidst the celebration.” — CBS News

Pakistan the deadliest country for journalists

“Pakistan has been named the world’s deadliest country for journalists. The Committee to Protect Journalists says 44 journalists were either murdered or killed worldwide last year while covering dangerous situations. Leading the death toll was Pakistan where eight journalists were killed.” — Radio Australia News

The Daily editor rallies the troops

“Jesse Angelo, editor-in-chief of Rupert Murdoch’s iPad-only tabloid, The Daily, sent out a memo to his editorial team this week, urging them to go beyond ‘scraping the web and the wires’ and do some actual reporting…” — New York Magazine

“Apple Inc. launched a new App Store service that allows for media subscriptions on its popular iPhone and iPad devices, but publishers and other suppliers of content aren’t rejoicing.” — The Wall Street Journal

$100m for Huffington, but bloggers still aren’t getting paid

“There is also a questionable irony in Huffington pocketing a rumoured $100m from this deal, a figure she refuses to confirm or deny. Soon after the deal was announced, Huffington and the rest of her team sent an email to all of HuffPo‘s content creators, emphasising that the only change they’d see would be ‘more people reading what you wrote’.” — The Guardian

new record for Crikey…6 stories bagging their friends down at News Limited, with the same Tax story 3 different ways…where as the ex owner at the Huffington Post gets away pretty lightly after making a rumoured $100 million yet doesn’t pay her bloggers ( or for the stories she aggregates…allegedly)…would have thought there was a little more in that?

Good one Pete!
Fair’s fare – it probably took time to realise those leaks were “about Labor” and not their “LNP”!