The world has more non-alcohol-drinkers than drinkers, the World Health Organisation reported overnight.

More non-drinkers than drinkers. The world has more non-alcohol-drinkers than drinkers, the World Health Organisation reported overnight, but nearly 4% of all world deaths are related to alcohol. The WHO’s “Global status report on alcohol and health” says harmful use of alcohol results in the death of 2.5 million people annually, causes illness and injury to many more, and increasingly affects younger generations and drinkers in developing countries. The report argues that wider implementation of policies is needed to save lives and reduce the health impact of harmful alcohol drinking.

Nearly 4% of all deaths are related to alcohol. Most alcohol-related deaths are caused by alcohol result from injuries, cancer, cardiovascular diseases and liver cirrhosis.

Globally, 6.2% of all male deaths are related to alcohol, compared to 1.1% of female deaths. One-in-five men in the Russian Federation and neighbouring countries die due to alcohol-related causes.

Globally, 320,000 young people aged 15-29 years die annually, from alcohol-related causes, resulting in 9% of all deaths in that age group. 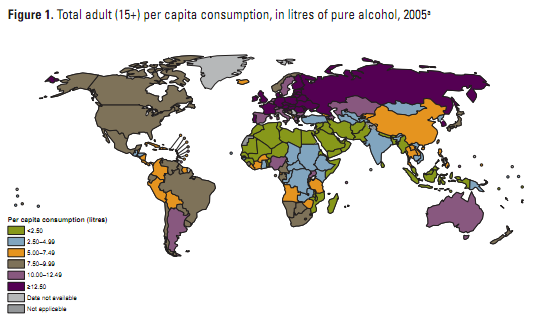 Australia comes in for a special mention in the WHO document. 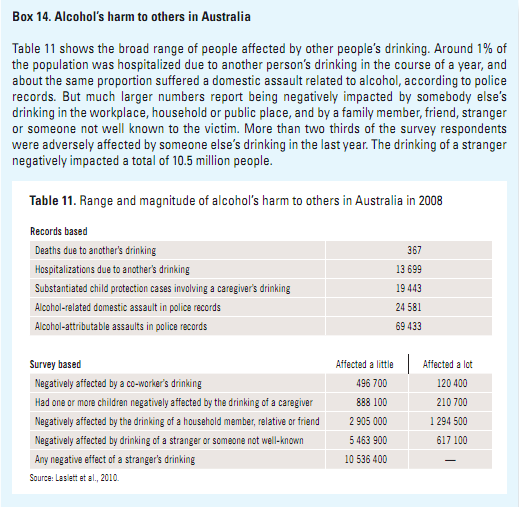 Increasingly like the king. Success at the Bafta’s has resulted in The King’s Speech becoming an even firmer favourite on the Crikey Oscars election indicator. 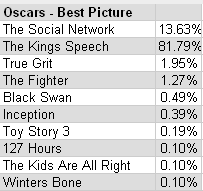 An old-fashioned border swap. It is an event familiar to readers of Cold War spy novels: the midnight border swap of captured spies at midnight. And now it looks like providing the end game for the strange case of the mysterious American multiple killer Raymond Davis. Davis, a contractor working for the US mission in Pakistan, is still in a Punjab jail after shooting two Pakistanis who pulled up alongside his car on their motorbikes. The US government is claiming diplomatic immunity for their man but the Pakistani courts have not yet conceded that such immunity should apply. Now the government of Pakistan has raised the case of Aafia Siddiqui, who is in prison in the US after being detained in Afghanistan.

The London Daily Telegraph reports that Siddiqui was sentenced to 86 years after being found guilty of trying to kill her American interrogators, provoking anger among Pakistanis who doubt that she was able to grab a rifle and wound US marines in a heavily fortified base. Washington has postponed an important Afghan summit, which was due to be attended by the Pakistani foreign minister next week, as a result of the impasse over Davis.

When asked this week about how to resolve the case by journalists, Babar Awan, Pakistan’s law minister, linked the two prisoners, and said the US had “a repatriation call and we have a call”.

Di Natale: we’re not wowsers for responding to booze abuse

Aren’t figures great, Richard! This means that 96% of all deaths are NOT related to alcohol.

The figures for Australia suggest that less than 0.1% of the population are hospitalised due to another person’s drinking, rather than the 1% claimed. The survey suggests that about half the population are affected by another person’s drinking. To get this figure the question must have had an interesting slant. The report lacks credibility for Australia, and may well be deficient for other countries.
Australians drink far less absolute alcohol per head than Europeans- especially those in Mediterranean countries where wine is a part of most meals. I have seen Germans drinking at breakfast time, but you don’t see public drunkenness there. To see public drunkennes you have to go to the Nordic countries where liquor laws are far more restrictive.
In many European countries the legal drinking age is 16.

Go Zut!
Go Michael!
As a well known former purveyor there are things I can’t say without being accused of all manner of crimes.

Richard, a confession: my comment was prompted by a line from the great, late, Irish comedian, Dave Allen. During one of his 1980s barstool monologues, whisky in hand, he cited figures that “Ten percent of all road accidents are caused by drunk drivers, TEN percent!!” He paused, deep in thought, then –

“That means ninety percent of all accidents are caused by drivers who are sober.”