Guthrie’s reckless abandon. Bruce Guthrie, as his Sunday Age column discloses, is a “former editor of The Age, The Sunday Age and the Herald Sun“. So you’d think he’d know better than to spell the name of Eddie “Mr Melbourne” McGuire and his brother Frank, set to take John Brumby’’s seat in state parliament, wrong in his column yesterday. Five times. 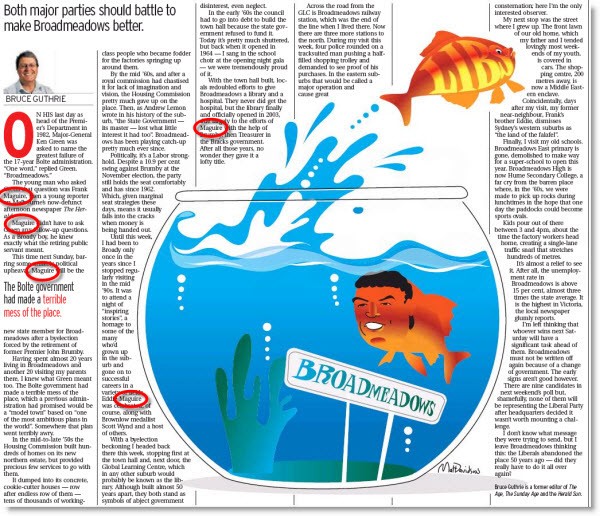 “Inexcusable,” Guthrie admitted to Crikey this morning: “I’ve promised to make it up to Frank and Eddie by buying them a falafel lunch. They were very forgiving, as Broady boys tend to be.” But how forgivable will the paper be of its team of sub-editors who somehow missed it (and still haven’t corrected the online copy)? The unfortunate headline on the piece? “Reckless abandon”. — Jason Whittaker 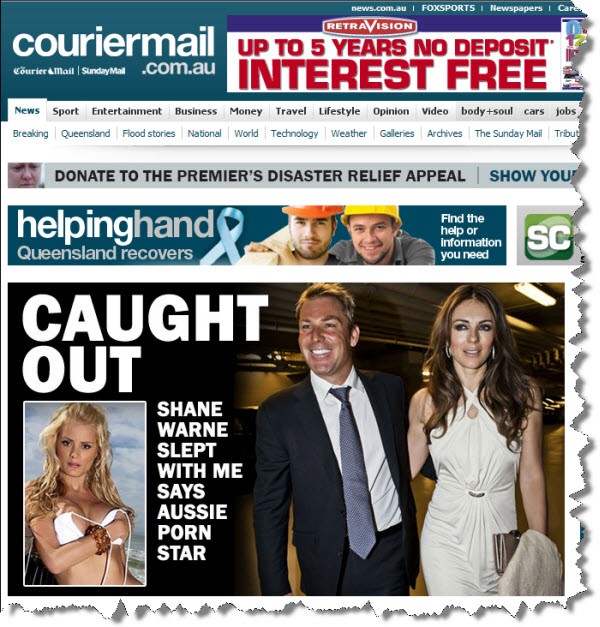 Personal rant on professional account. Someone at NAB forgot to switch accounts before posting…

NT News watch: We salute you mighty NT News for this wonderful front-page story on Saturday: 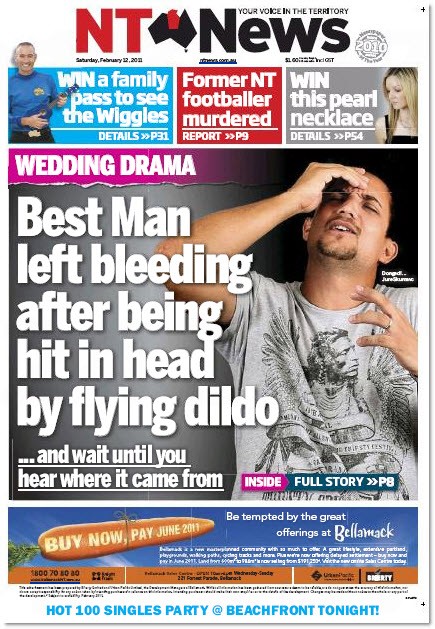 This year’s winners of The World Press Photo.

“The World Press Photo is the most prestigious award for photojournalists. This year’s winners spanned a multitude of issues, from domestic violence and punishment in Taleban-ruled Afghanistan to images showing the very first minutes after the earthquake which hit Haiti in January 2010.” — New Scientist

“The consolidation of metropolitan newspaper printing operations could be back on the agenda with Fairfax Media’s new chief executive, Greg Hywood, rethinking the way the newspaper, digital and radio group manages its printing presses.” — The Australian

“I have noticed over the last 2 months that the number of strip ads appearing in the AFR have numbered in the low single digits. It has become a morbid fascination of mine of mine – each morning over coffee I count the number of ads and can confidently state the best I have seen was six in early February.” — sam’s mojo

Huffington’s bank manager is happy, but will AOL be?

“Even with $315m in her pocket, can Arianna Huffington work her magic on the lumbering monster that is AOL?” — The Guardian

“Fox News’ Glenn Beck can be fun to watch on cable news, but About.com’s Political Humor blog has taken it to the next level by introducing this: The Glenn Beck Conspiracy Theory Generator.” — Mediabistro

The NAB tweet was a marketing ploy, not a mis-tweet.

The only possible way the NT News headline could be improved is if the best man was being pursued by a croc at the time.

It’s also a marvellous ad placement down the bottom…