ACMA has officially cleared Seven News over complaints about last year's story in which the network revealed that NSW MP David Campbell had visited a gay sauna. Plus, Marieke Hardy celebrates her new show Laid and other media stories. 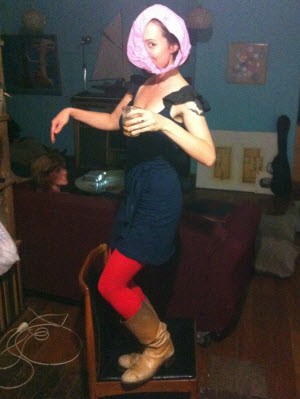 She did warn her Twitter followers earlier: “Tonight at 9:30 I’ll be standing on a coffee table with my underpants on my head. You, however, can watch the tv show we made on ABC1! #laid” But then, she also said she was watching City Homicide on Seven…

New iPad: thinner, lighter, faster — and with a camera

“Apple Inc. has started manufacturing a new version of its iPad tablet computer with a built-in camera and faster processor, said people familiar with the matter.

“The new iPad will be thinner and lighter than the first model, these people said. It will have at least one camera on the front of the device for features like video-conferencing, but the resolution of the display will be similar to the first iPad, these people said. It will also have more memory and a more powerful graphics processor, they said.” — The Wall Street Journal

“I don’t blame Armstrong or Huffington for pursuing this strategy. Making a living off the news is hard, and if they’ve figured out a way to fool search engines into pushing visitors their way, I salute them. But there’s a long-term problem with their strategy: They won’t be able to fool the computers forever.” — Slate

The easy way to tell The Washington Post it’s wrong

“Beginning Monday, every new staff-written article on the Washington Post‘s website came with a prominent link labeled “YOUR FEEDBACK: Corrections, suggestions?” One click takes the reader to a form for reporting errors or providing other feedback to the newsroom.” — MediaShift Idea Lab

“The Vatican put its foot down Wednesday over the idea of ‘confessing’ by iPhone, after news that US users can now download an application for the Apple gadget that helps the faithful gain absolution.” — AFP

And yet, my dear pope, the effect of confessing via iPhone or in person works out to be the same. No effect.

The Vatican understands the importance of getting bums on seats and numbers through the door – the flock are more easily led when physically present.

correction: …the flock IS more…

Back in the early 1970s a group us having survived the Christian Bros and the Brown Joeys developed a computer system we called Penance Pack.

Penance Pack would have terminals installed in all confessionals worldwide, and connected through angel-net to a giant data base at VAT-Com which kept track of indulgences with real-time access and updates. An optional extra module provided for trading of indulgences in the grand Medieval manner – even a futures market for sins not yet committed.

Is the world still not ready for Penance Pack?

@Tamo: would the indulgences sold on the futures market be fungible? As an atheist, I want an indulgence that isn’t tied to a particular deity/belief structure.